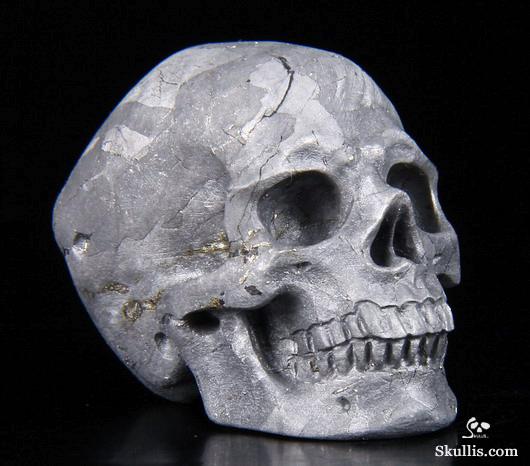 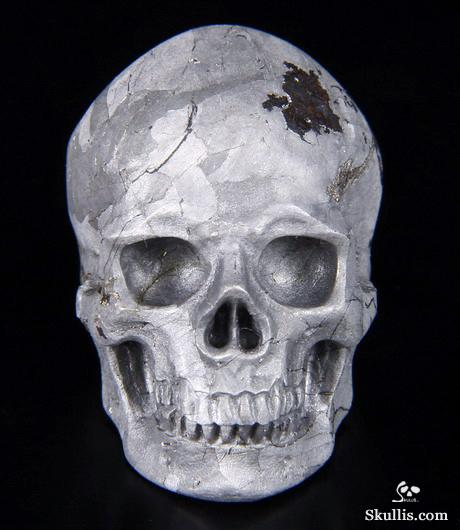 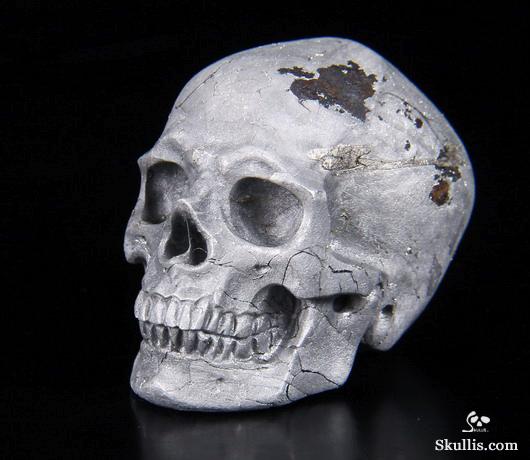 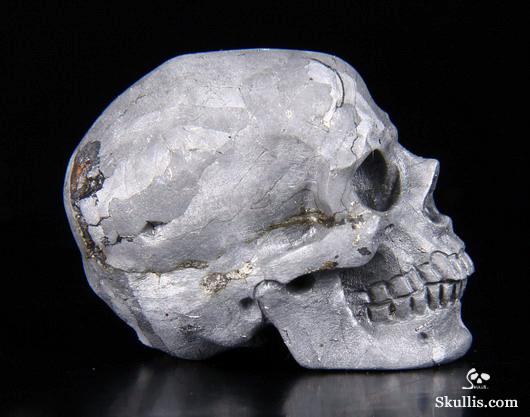 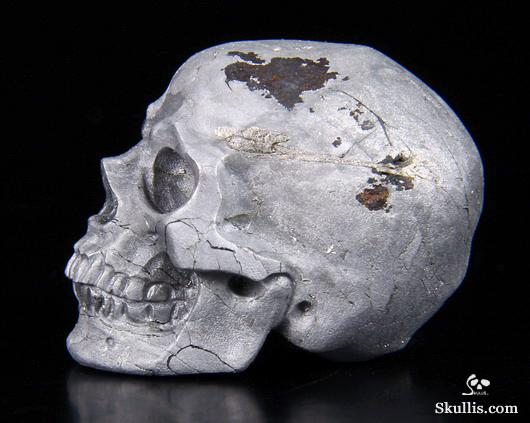 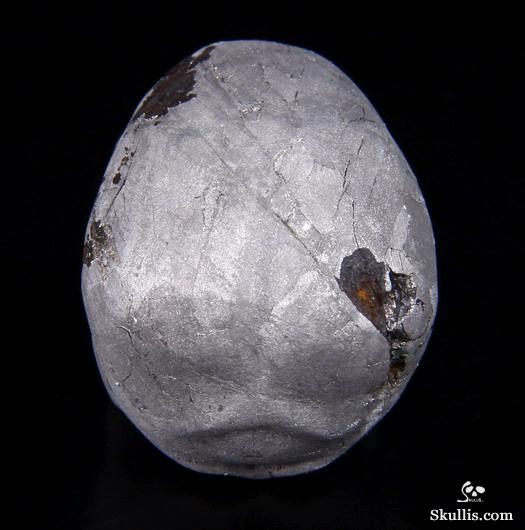 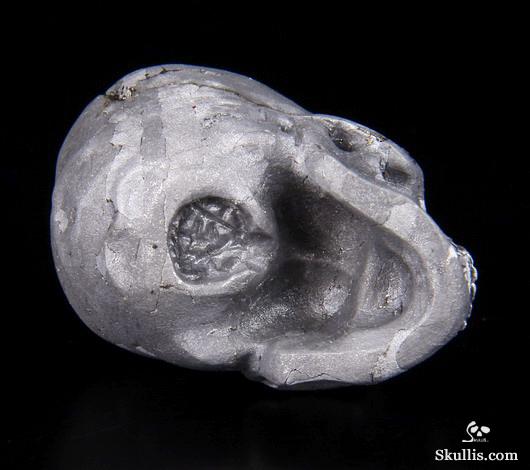 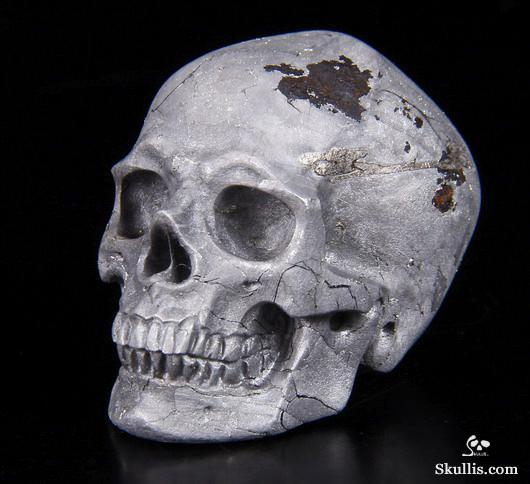 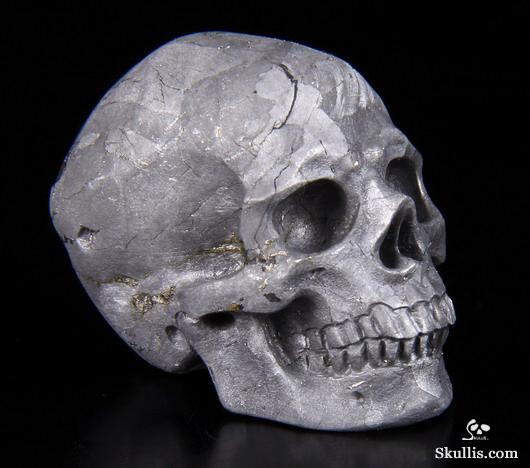 The Stars are Ours is an excellent crystal skull carefully carved from a sample of the Campo del Cielo meteorite which fell to Earth around 2,200-2,700 BC, or approximately 4,200-4,700 years ago, based on carbon dating of burned vegetation below some of the larger pieces. The fragments of the Campo del Cielo comprise more than 99 metric tons, making it the heaviest known meteorite to have impacted the Earth. The first described Campo del Cielo meteorite fragment was recorded in the year 1576, located based on stories about a source of iron Natives had long used to make weapons. After this, the fragment was forgotten until 1774 when it was rediscovered by following information that had become legend. The field of impact in Argentina is 60 square kilometers and consists of at least 26 separate craters, and an additional 60 kilometer area encompasses the strewn area of smaller fragments. The Campo del Cielo meteorite displays a coarse octahedrite crystallization pattern, and is mainly composed of iron, with 6.67% nickel, and smaller traces of cobalt, phosphorus, gallium, germanium, and iridium. The higher iron content may be the reason for the fragmentation of the meteorite as it met the Earth's atmosphere when it fell. The visible inclusions in The Stars are Ours crystal skull sculpture may be silicates.

The Stars are Ours crystal skull is carved in the Super Realistic style from Skullis and measures 1.5 x 1.1 x 1.2 inches (39x27x30mm) with a weight of .27 pounds (122g or 610 carats). The polishing process has revealed the coarse octahedrite crystalline pattern across the surface of this fascinating gemstone sculpture, and the crystal skull details are carved perfectly. Quite heavy for its size, The Stars are Ours meteorite crystal skull sculpture is a brilliant member of the crystal skull community, representing not only the of the vastness of space, but also the natural history of our world!

The Stars are Ours meteorite crystal skull sculpture helps us to gain a greater perspective of our shared world experience. It assists us to identify the many things our diverse cultures and belief systems have in common, and inspires us to express our appreciation of this more often, while simultaneously schooling our emotional, and sometimes emotionally lacking, responses and beliefs that keep us focused on our differences.

The Stars are Ours crystal skull represents our unlimited potential to achieve all that we can imagine, as well as the limitlessness of our imagination. History has shown us that when working together, we can accomplish amazing things, and The Stars are Ours meteorite crystal skull sculpture reminds us that it is fully possible that we may once again choose to work in harmony with each other, to step forward into our spiritual potential as we also move forward to open a door and enter into the fields of stars in the universe beyond.

Meteorites connect one to the energetic expressions of other worlds and entities, of space and the heavens, and of the spiritual worlds as well, helping to bring clarity to the knowledge and information received from these sources. Meteorites also help to increase the effectiveness of communication at any levels, including one's interactions with other people and the various members of the natural world. The meteorite is commonly considered to be a gift to the people of the Earth from the stars.

Meteorites are used to stabilize one's mental, emotional, physical, and spiritual aspects, and to bring these into overall alignment as well. They encourage responsibility, surety, courage, belief in oneself and others, and trust, and also help one to be more comfortable when asking for, and depending on other people for, help and support. Meteorite instills and supports the propensity for stamina and perseverance in one's physical, mental, emotional, and spiritual experiences.

Meteorite inspires an open minded and unbiased self examination from the perspective of one's higher consciousness, and assists one in maintaining an optimistic outlook and positive attitude. In so doing, meteorite helps one to connect and balance one's life with the loving spiritual nature of reality.

Meteorite aids in the process of creating and manifesting one's goals, and of serving one's greater purpose. It also encourages the concept of humankind as a global community, which is also part of a larger collective of loving sentient beings, with a responsibility to maintain and preserve the Earth rather than to use what is wanted and discard the rest. It helps to form a connection between what is old and what is new, allowing for experiencing a smoother transition during changes, and allowing for the acquisition of ancient knowledge from past Earth and non-Earth cultures.

Meteorites are used to address physical health issues related to iron levels in the body, including deficiencies such as anemia and excess iron conditions like hemochromatosis. They are also used for mental health issues where depression, apathy, and withdrawal, as well as disjointedness, confusion, and similar expressions of incongruity occur. Helping to join the physical body with the spirit, meteorites encourages oneness and helps the body function at an optimal level of health.

NOTE: Skullis does not prescribe treatment for medical issues. Skullis offers information for reference to assist with the selection and understanding of crystal skulls, including this meteorite crystal skull sculpture.