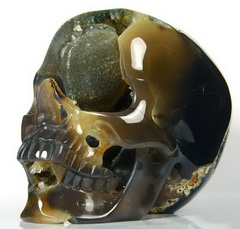 The Unbiased Mind, an agate geode crystal skull from Skullis, is a unique and fascinating Super Realistic design sculpture. Translucent browns and deep bluish black set off the vibrant rich green included in this awesome agate crystal skull. Fascinating veins of larger well formed clear quartz crystals stand out in stark contrast as they trail across the blanketing of fine crystal druse terminations of the geode's interior. The Unbiased Mind is a great melding of the art work of nature and the imaginative flair from Skullis artists!

The Unbiased Mind symbolizes our unfettered and enthusiastic desire for knowledge and wisdom. It helps us to realize that to attain these, we must be free of expectations, judgment, and the tendency to act only for ourselves. When we are able to expand our conscious minds and surmount our propensity towards intolerance and predisposed assumptions, we open our minds and hearts to receive the abilities of selflessness, perception, understanding, and enlightenment. The Unbiased Mind encourages us to embrace the higher choices of acceptance and forgiveness and to perceive our own limitless possibilities, and those of the universe, allowing for the inclusion of all aspects of existence to be possible, without requiring the proof which will never be observed as long as we are determined that it does not exist. Until we permit something to be possible and real, nothing will ever convince us that it is. The Unbiased Mind inspires us to accept the challenge of overcoming our fears and seeing beyond the beliefs that we may be using to hold ourselves back from achieving enlightenment.

Agate has long been used as a stone of protection, to stimulate analytical capabilities and precision, for providing for perceptiveness to situations, and for awakening ones inherent talents and adroitness. It has also been used to produce inspiration from, and connectedness to, the spiritual worlds. Agate raises one's consciousness, builds self-confidence, and assists one in choosing one's friends carefully.

Agate is used to bring prosperity. It is also used to avert, and protect from, lighting and stormy weather (physically and metaphysically). Agate provides strength, helps us to have patience and courage, and its calming effect allows for finding inner peace.

NOTE: Skullis does not prescribe treatment for medical issues. Skullis offers information for reference to assist with the selection and understanding of crystal skulls, including this agate geode crystal skull sculpture.