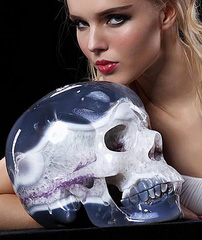 The Truth in Shadows agate with amethyst geode crystal skull possesses the energy of the elements of air and spirit. This beautiful crystal skull encourages us to look deep within to gain insight and enlightenment, to face our fears and resolve the issues created by various internalized thoughts and attitudes we are hiding from ourselves. With the royal purple amethyst crystals imparting an eloquence of intellect and enhancing our potential for keen logic and natural intuition, Truth in Shadows empowers us to be unswayed by emotional and material concerns, and to confront our inner fears and self imposed restrictions with clarity of thought and directness of action.

Truth in Shadows is intended to inspire trust and confidence in ourselves, gently encouraging the release of self deception and the unhealthy blocking of emotions. With the ability to easily see the weakness in our attempts at self deception, we will be able to release those hindering attitudes and feelings, bringing a new personal reality of completeness, security, joy, and prosperity and success. Truth in Shadows shares with us the wisdom that when we heal ourselves, we also heal the world.

At 11.6 x 7.3 x 9.1 inches (295x185x230 mm) this Titan, Super Realistic, agate with amethyst geode crystal skull is a considerable work of art with an awesome presence! Large and beautiful purple amethyst crystals line the interior of the geode, surrounded by their lengthy clear quartz crystal bases, all wrapped between deep blue and intense white layers of agate. The agate geode itself is beautiful, and carved as this impressive and massive crystal skull it is more than stunning!

Agate has long been used as a stone of protection, to stimulate analytical capabilities and precision, for providing for perceptiveness to situations, and for awakening ones inherent talents and adroitness. It has also been used to produce inspiration from, and connectedness to, the spiritual worlds. Agate raises one's consciousness, builds self-confidence, and assists one in choosing one's friends carefully.

Agate is used to bring prosperity. It is also used to avert, and protect from, lighting and stormy weather (physically and metaphysically). Agate provides strength, helps us to have patience and courage, and its calming effect allows for finding inner peace.

Amethyst brings a peaceful and pacifying energy to the neural impulses of the brain. It is used to resolve insomnia, especially when the condition is caused by an excess of mental activity. Amethyst lessens and removes stress, anxiety, and nervous tension, stabilizes brain activity and imbalances, and is used to counter psychic disturbances.
The geode represents fertility, creativity, mother earth energy, protection, and is excellent for grounding. Geodes have been used to increase fertility and creativity, offering powerful protection during pregnancy, childbirth, and for small children. Geodes represent the Creatrix form of the goddess and connect the earth with the universe. Geodes also represent both the male and female reproductive systems, especially the womb. Geodes amplify the energies that are directed to them, including the energies of other stones and thought energy, and are considered effective at enhancing the harmony of family and home, and to enhance the flow of chi, the life force energy.

NOTE: Skullis does not prescribe treatment for medical issues. Skullis offers information for reference to assist with the selection and understanding of crystal skulls, including this agate amethyst geode crystal skull sculpture. 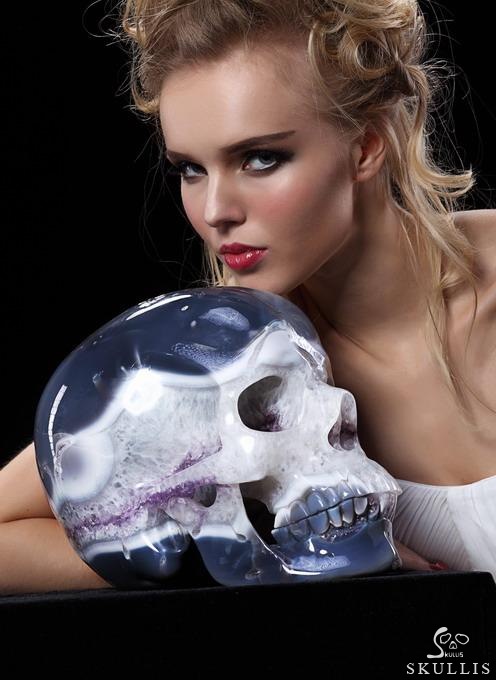 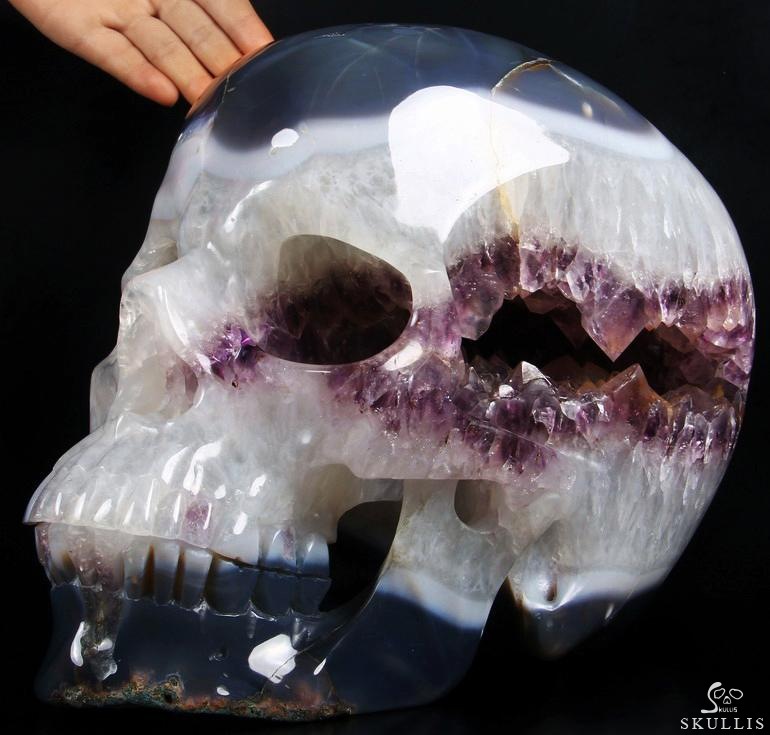 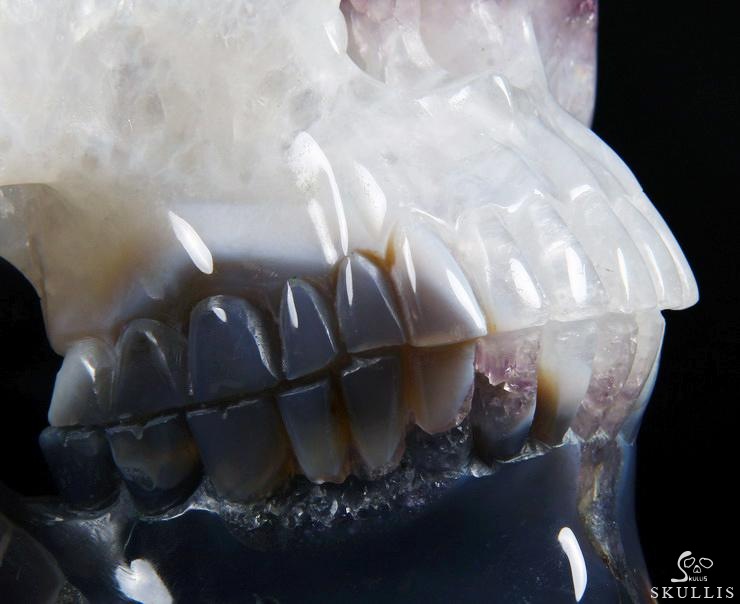 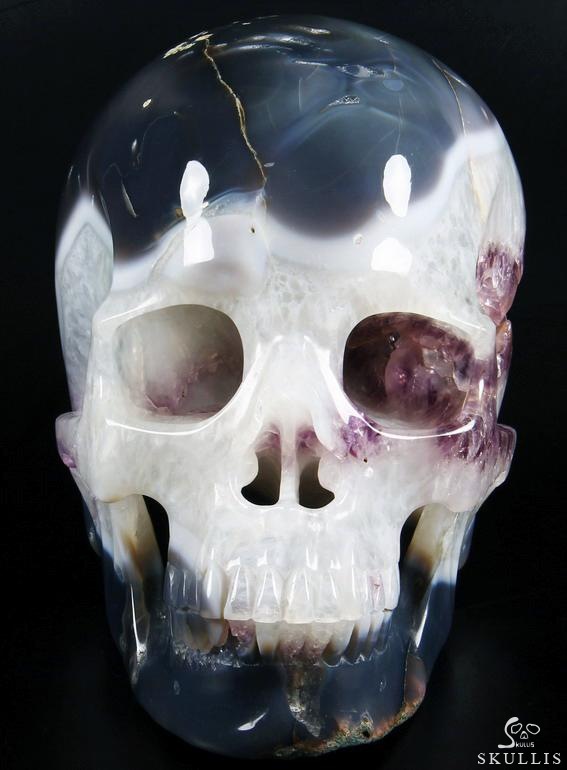 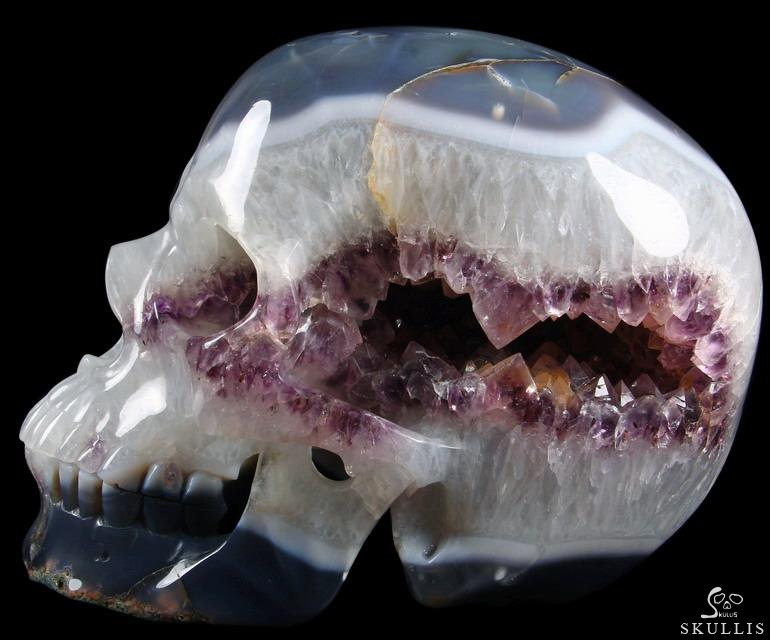 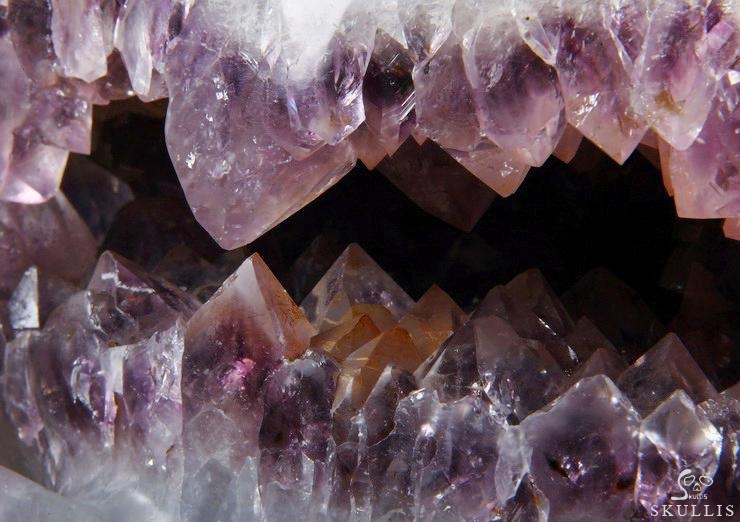 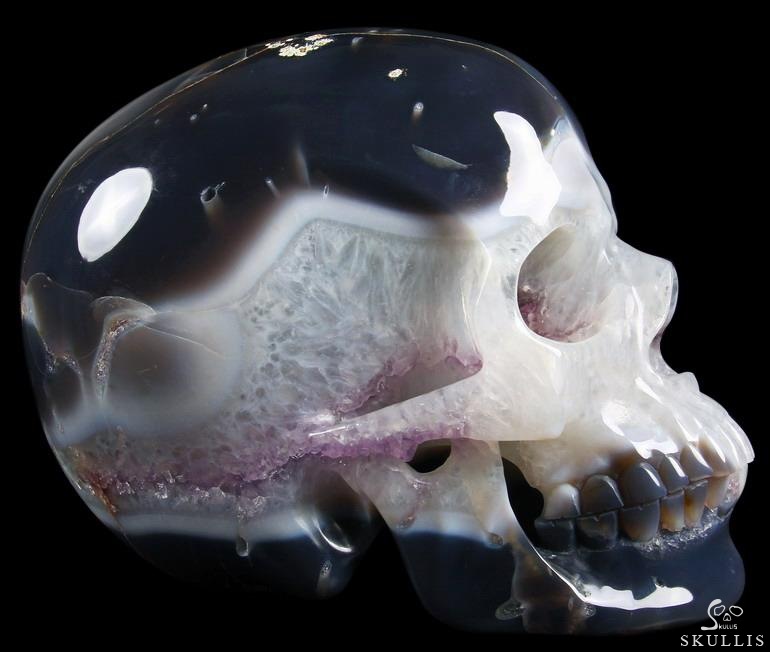 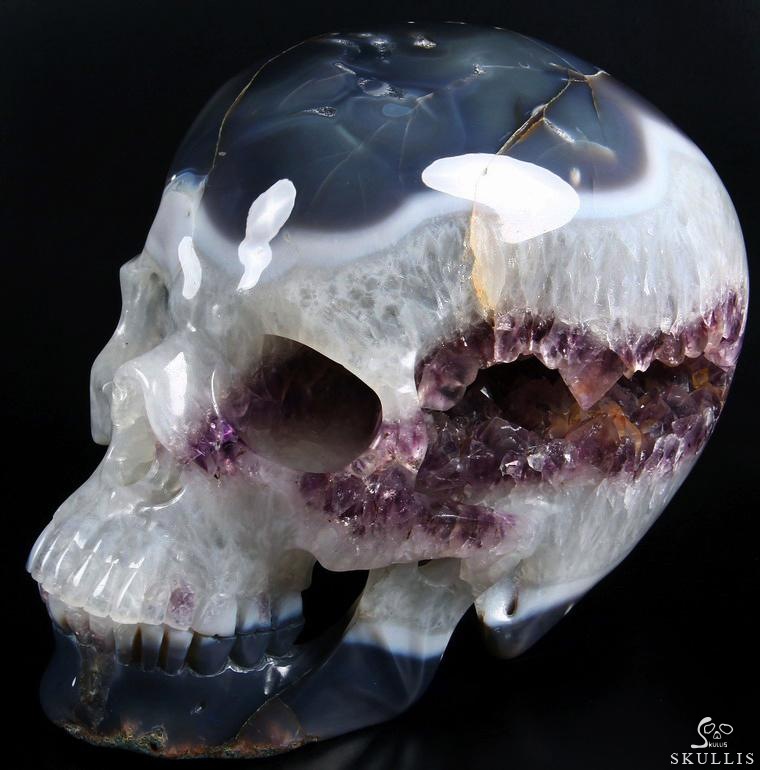 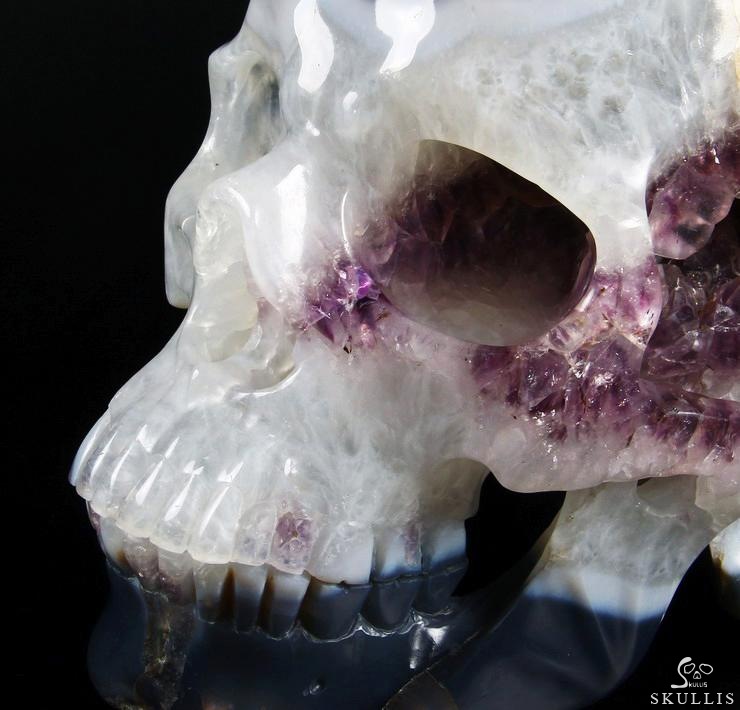 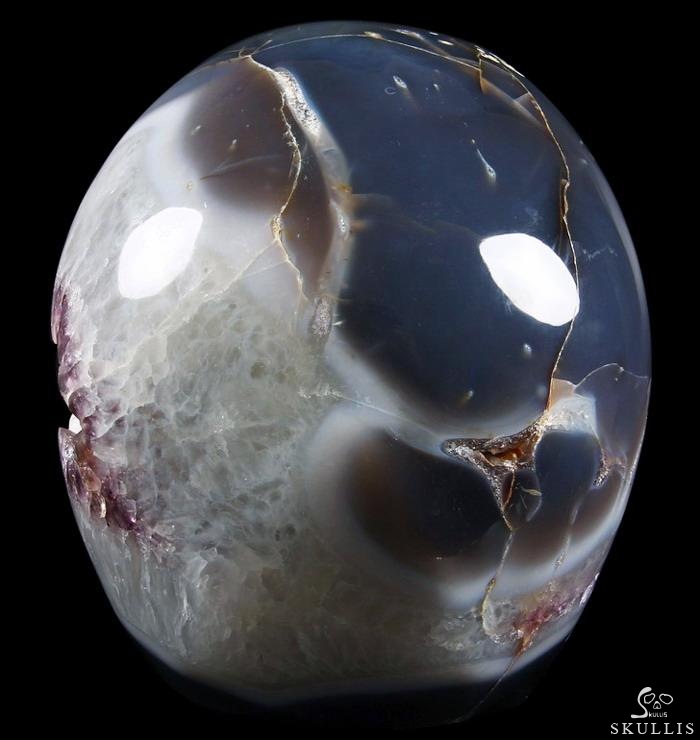 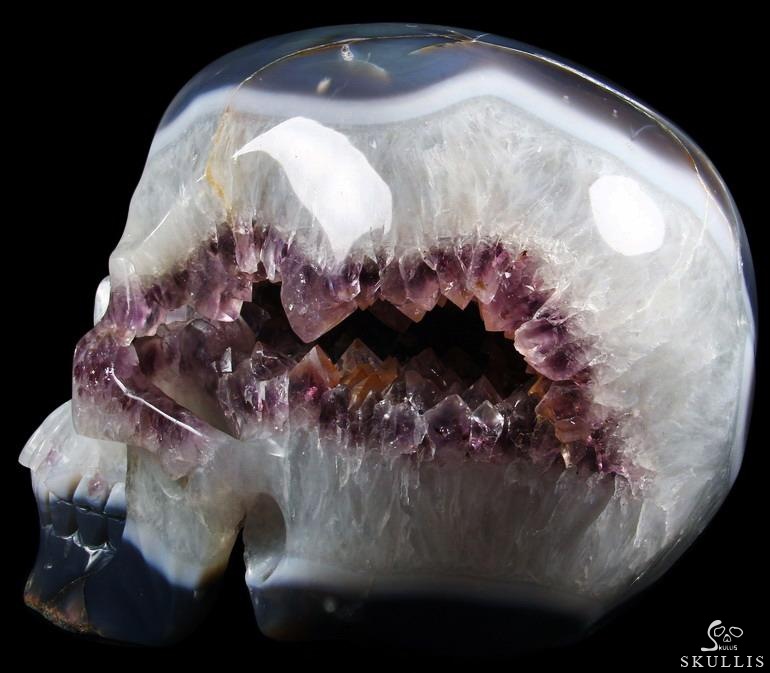 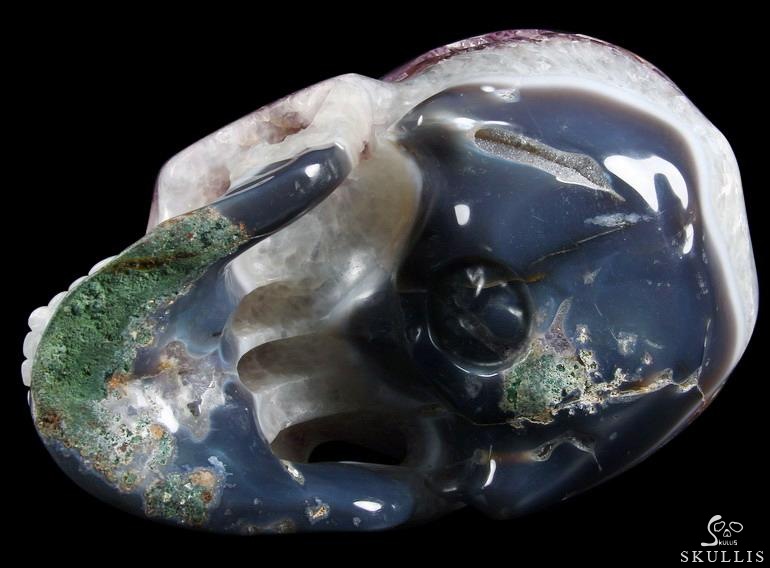 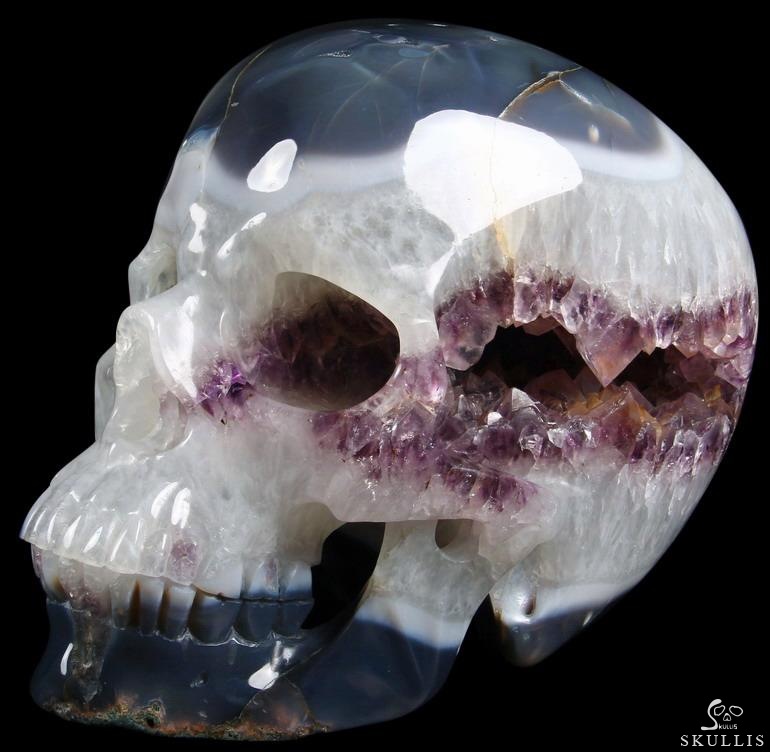 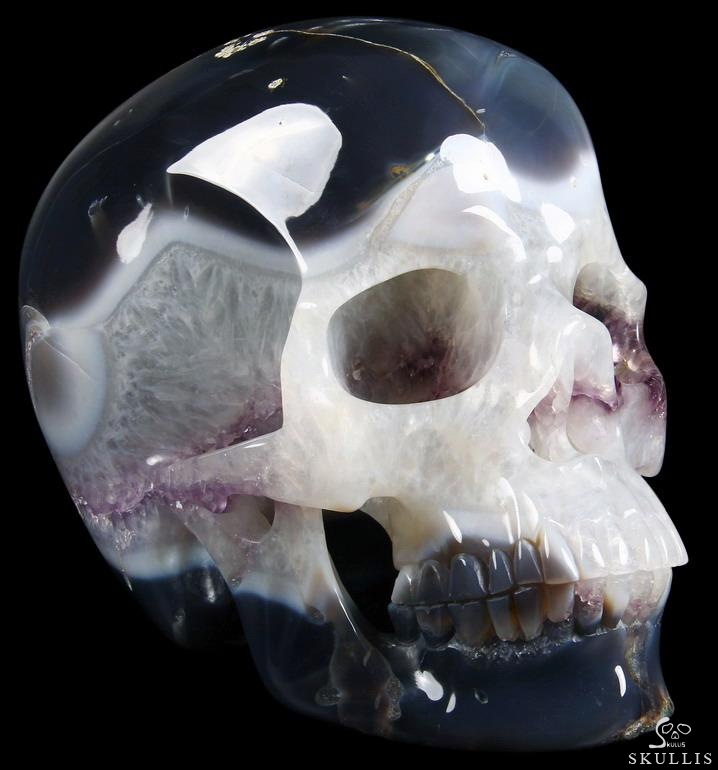 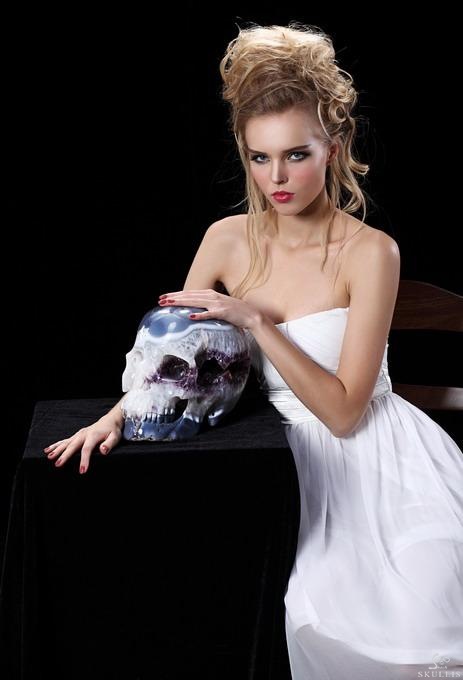