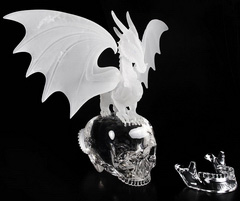 After finally determining our design, we began a lengthy search which resulted in finding a wonderfully clear quartz crystal from Madagascar. During more than two months of meticulous crafting, this exceptional quartz specimen would gradually become our next masterpiece. Dragon Light is a four piece sculpture. The dragon and the skull are a single piece, and the wings are both individual pieces. Like the original Mitchell-Hedges crystal skull, the lower jaw is detachable.