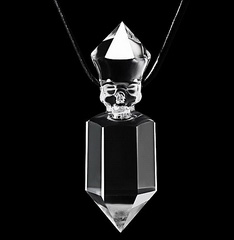 This beautiful quartz crystal skull pendant has been masterfully carved from top quality, water clear quartz crystal into a six sided double terminated crystal. The design of this pendant was inspired by the idea that quartz crystal is a master healing crystal. Now an intricately detailed crystal skull protects and presides over the transmutation of negative energies, thoughts, feelings, and attitudes into the beneficial and freeing expressions of unconditional love, nonjudgmental acceptance, patience, and perseverance required to attain peace, harmony, and ideal health on all levels of existence; physical, mental, emotional, and spiritual.

One gets the sense that the personality of the Master Healer is that of a wise elder possessing a youthful vigor. Compassionate and welcoming, yet with a contrarily sly, witty sense of humor employed more for personal entertainment than for the amusement of those who aren’t following the random references. In all, a good soul, a true friend, and a choice companion in Light.

At a sizeable 3.1"x1.2"x1.1" (79x30x29 mm) this amazingly clear quartz crystal skull pendant catches and plays with the light, sharing it’s beauty all around it! The pictures don’t do it justice! It’s so much nicer when experienced firsthand!

Whether worn for the purposes of healing, therapy, protection, or meditation, or as a beautiful adornment for personal pleasure, Master Healer will surely help you to achieve your intentions!

Double terminated crystals receive and transmit energies simultaneously, and are commonly used to continually fill the aura with an abundance of charged electrons, thus raising the intensity of a person’s electro-magnetic field. This configuration of a double terminated crystal shape is particularly useful in blocking effects of toxic radiation produced by computers, power lines, and the many other modern technologies that surround us in our world today.

Double Terminated Crystals are very helpful for use during meditation to connect with the spiritual aspects of existence, acting to send and receive energy and messages to and from higher spiritual planes when communicating with angles and spirit guides.

Used for divination, the double terminated crystal assists one to connect with the past and the future, allowing access to information that gives insight to current thought and behavior patterns.

Quartz is considered to be a source of Light, and has been named the Perfect Jewel. Referred to by some as the “supreme gift of Mother Earth, it is considered a master healer. Almost every culture throughout history has believed quartz to be a sacred and magical source of power. Aboriginal tribes of Australia and South America share their creation myth of the cosmic serpent being led and guided by a quartz crystal. Indigenous people of North America and Burma believed quartz crystals to be living entities and ritually offered them gifts of food, some believing the crystal had great power to aid in divining and hunting. Central and South American cultures revered quartz crystals carved into the shapes of human skulls as powerful religious objects where deceased ancestors and gods resided.

Even in the modern world quartz continues to play an integral part of our everyday lives, including the device you are using now. And it was with a quartz crystal that Sir Isaac Newton discovered the color spectrum of visible light, created as the crystal refracted sunlight shining through it.

Quartz symbolizes sacred fire, purity, and the infinity of space, of patience, and perseverance. Quartz instills harmony and purpose. As it does with the technologies it is used in, quartz amplifies energy, accepts programming, and holds memory, making it the most diversely useful stone for healing, meditation, expanding consciousness, spiritual communication, past and future life recall, and any other desired application. Quartz exemplifies the concept of the saying “With God, all things are possible,” in the sense that when one comes from a position of unconditional love and acts according to the highest good of all involved, one can achieve any desired outcome.

Physically quartz is a master healer used for any condition. It is considered to stimulate the circulatory and immune systems, bringing vitalizing energy and balance to the body.

Emotionally quartz enhances the body’s internal structure and surrounding subtle bodies to further connect the physical body with the mind. Quartz replaces negativity found within with positive thoughts and feelings. Quartz enhances one’s perceptions of the world, increasing consciousness and clear thinking, and gives enhanced energy, dedication, endurance, composure, and patience, bringing the lesson of being loving and finding joy in peaceful coexistence. Clear quartz brings strength and clarity to the mind, boosting concentration and memory while filtering distractions. It is helpful in finding sleep, and helps with the interpretation of messages and lessons experienced in one’s dreams.

Spiritually, quartz crystals are considered to be unique and individual, each with their own personalities and lessons to share. For many people, quartz crystals are the first crystals they find themselves attracted to and in communication with. Many people find quartz crystals to be invaluable tools and companions in their lives, gaining in personal growth and consciousness, light, and positive energy during their experiences of thoughts, actions, feelings, and encountered situations. Quartz is considered to connect the physical and spiritual dimensions, intensifying communication with the Divine, and other-worldly masters, teachers, and healers. Quartz is considered a venerated stone in relation to those who have crossed over in death, with many cultures including quartz in funeral rites, placing it in tombs, urns, and burial sites. Many people consider their personal quartz crystal, sphere, or stones to be intimately connected to them, and consciously direct their essences into the stones for such purposes as storing energies and recording their life experiences, a sort of “Crystal Diary.”

Silver, long associated with the moon and water, reflects and mirrors the soul, giving calm and balance. Used to “draw down the moon” during lunar ceremonies, it shares the moon energy and protects from negativity. Silver is considered to be directly connected with the spiritual aspects of life. Silver has long been used to work in combination with the energies of gemstones, absorbing, amplifying, and emulating energies of gems and enabling the fusion of the different energies and a smoother transference to the wearer. Silver allows the wearer to tune in to the energy vibrations and flow of the universe. Silver is associated with love, the emotions, and healing. Metaphysical and mystical uses of silver include enhancement of manifestation, good health, communication skills, perception, psychic and intuitive capabilities, connection between physical and astral bodies, and revelations in dreams.