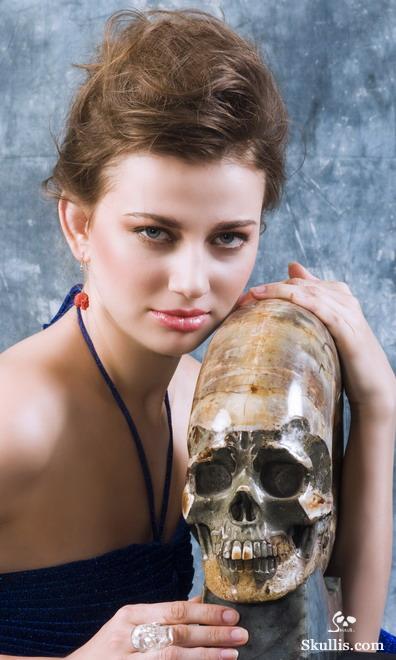 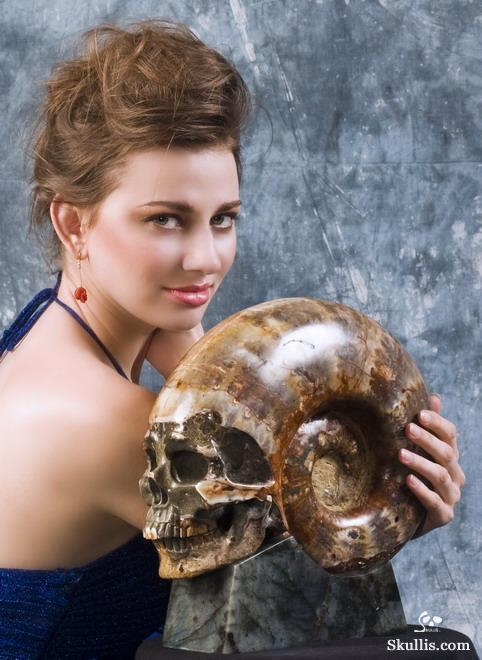 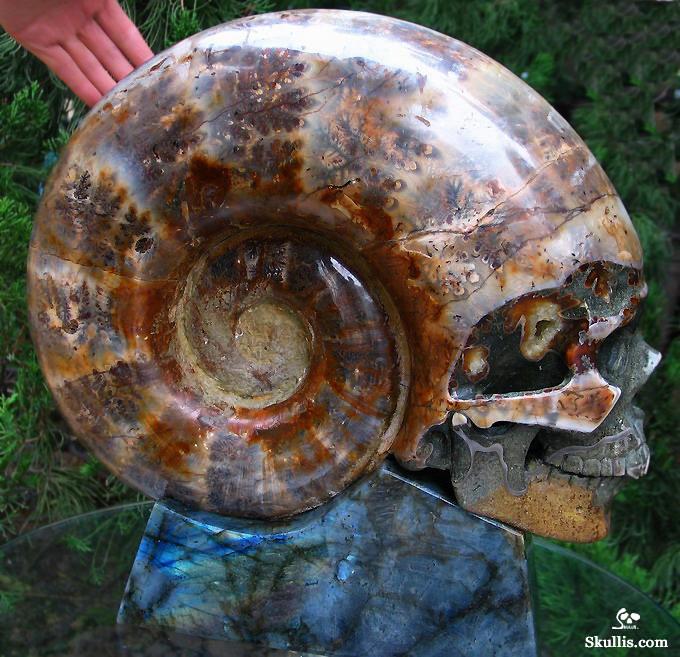 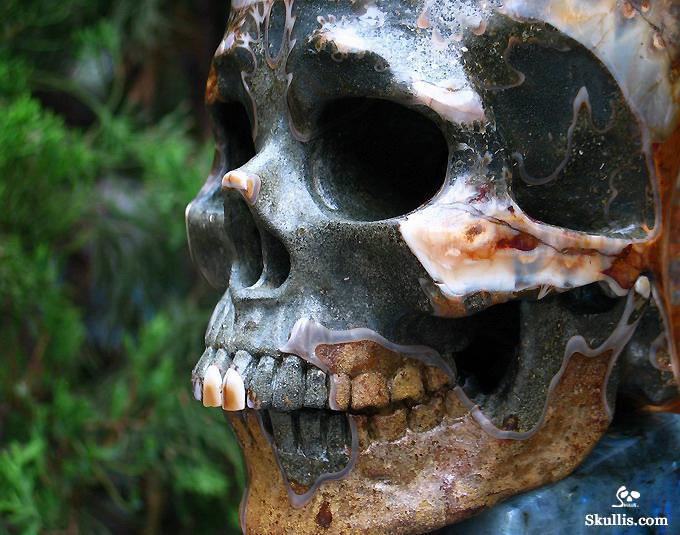 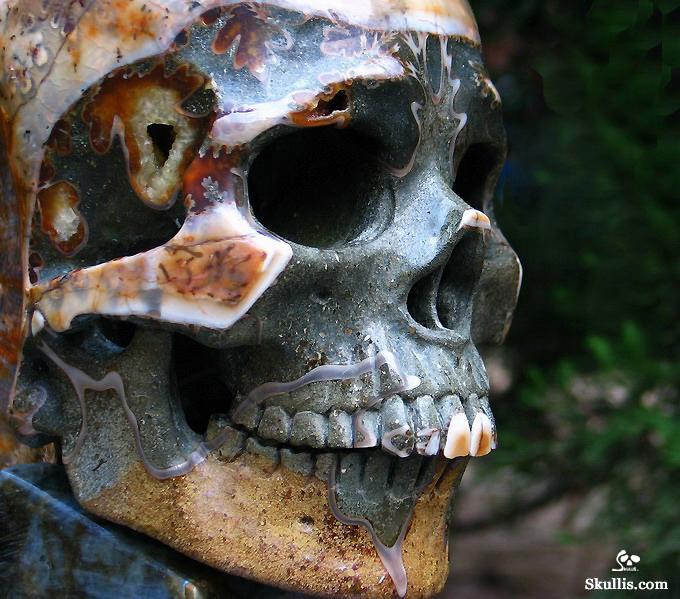 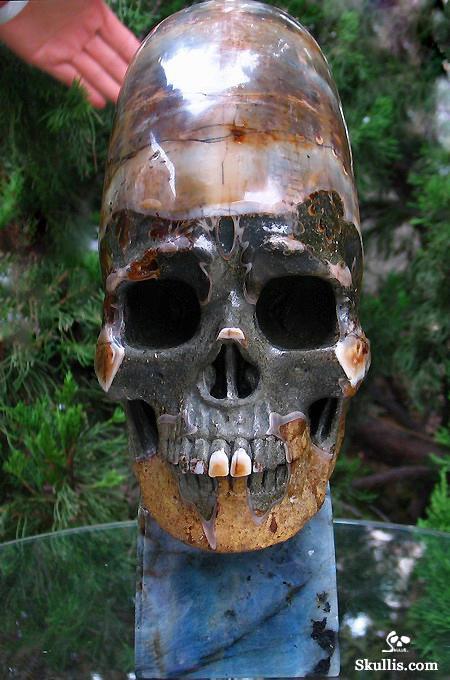 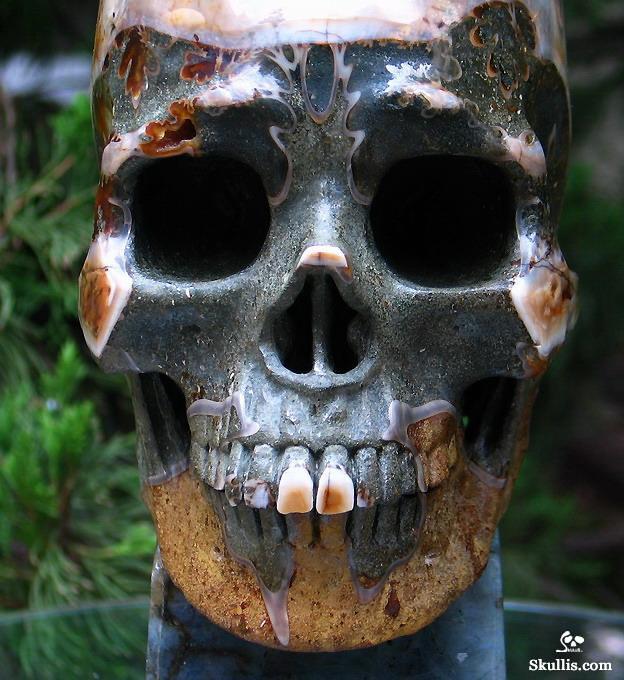 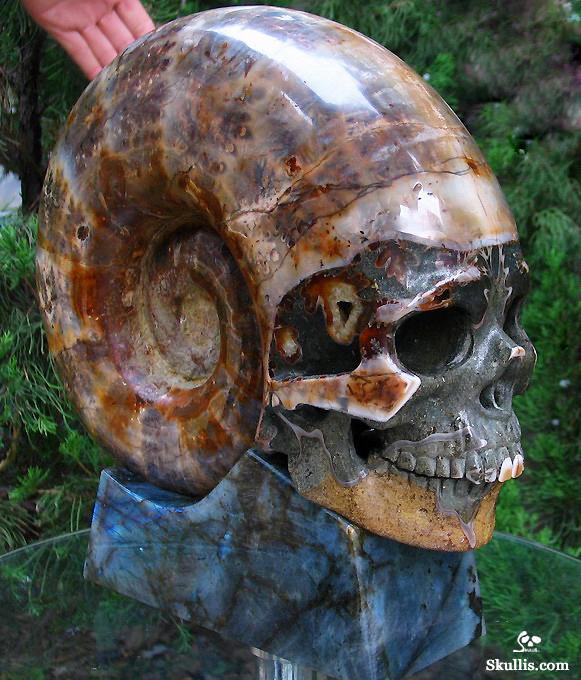 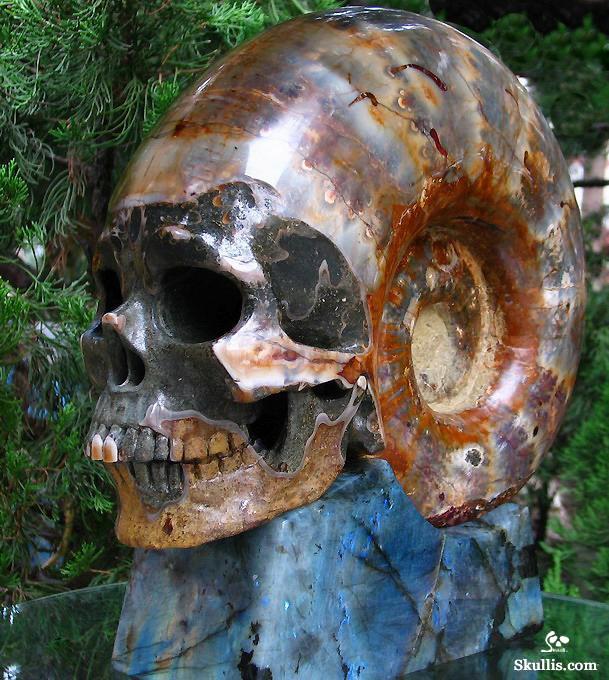 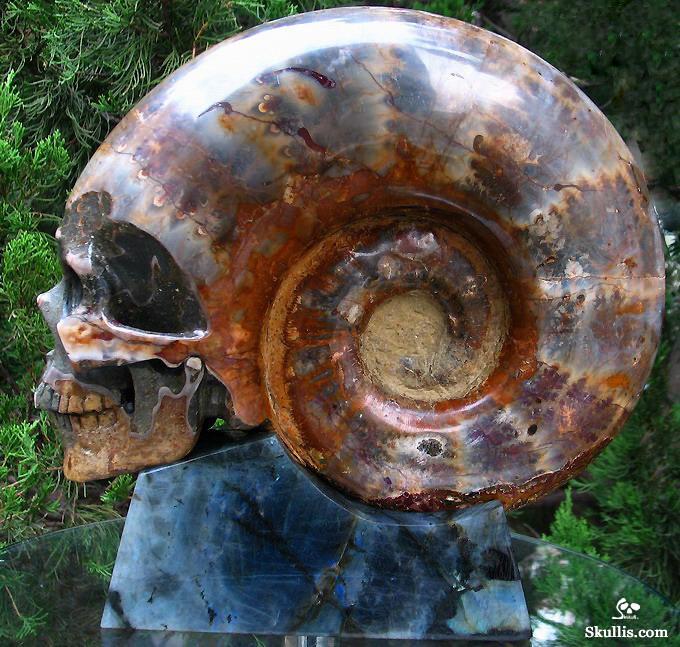 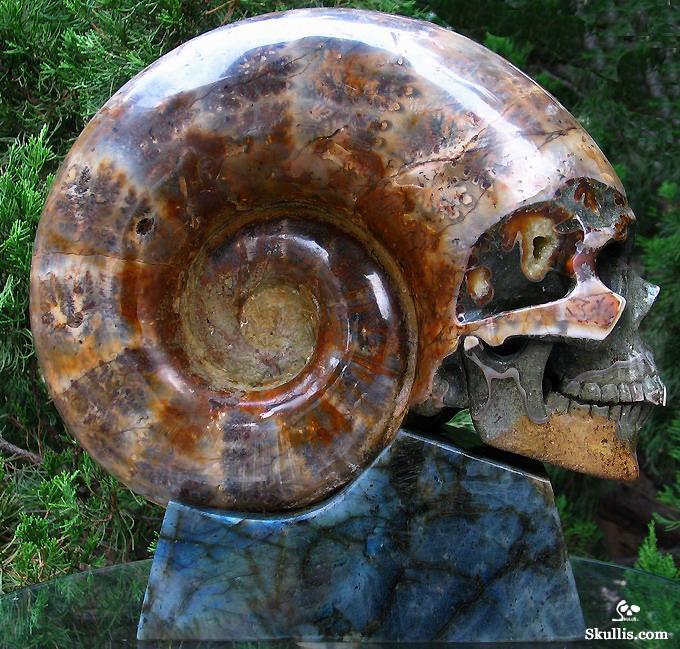 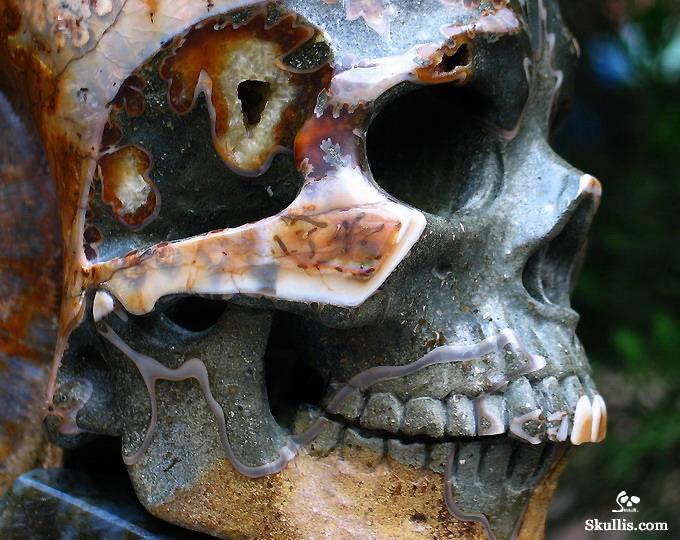 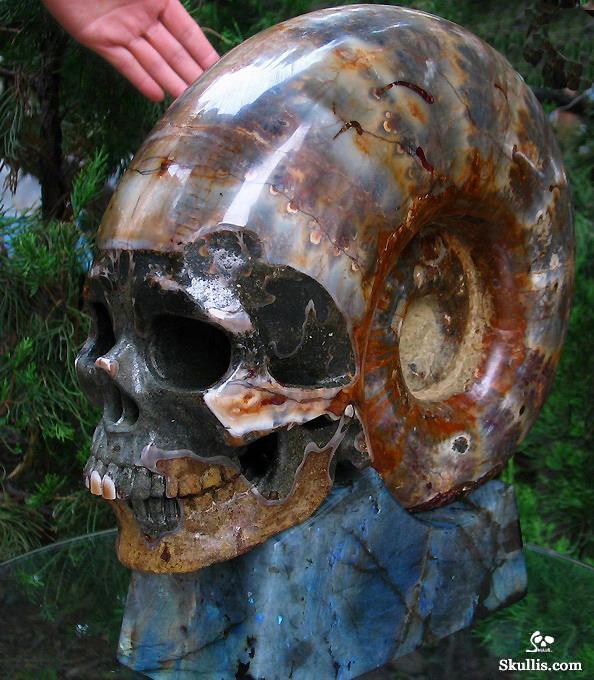 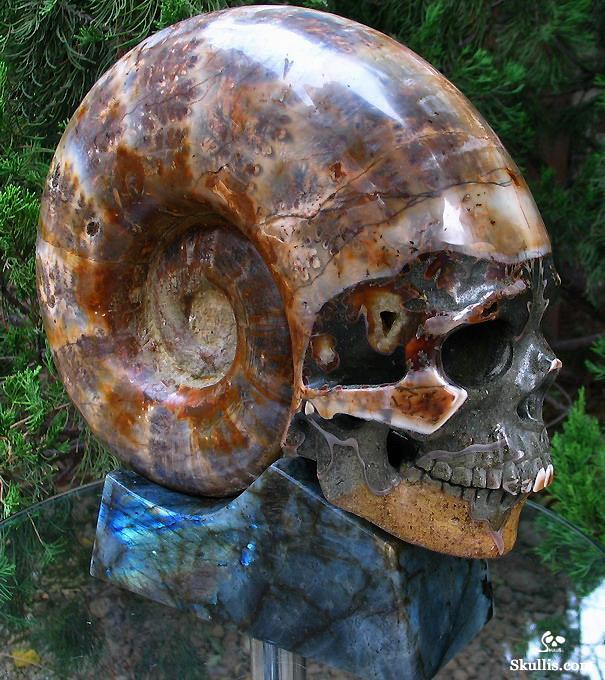 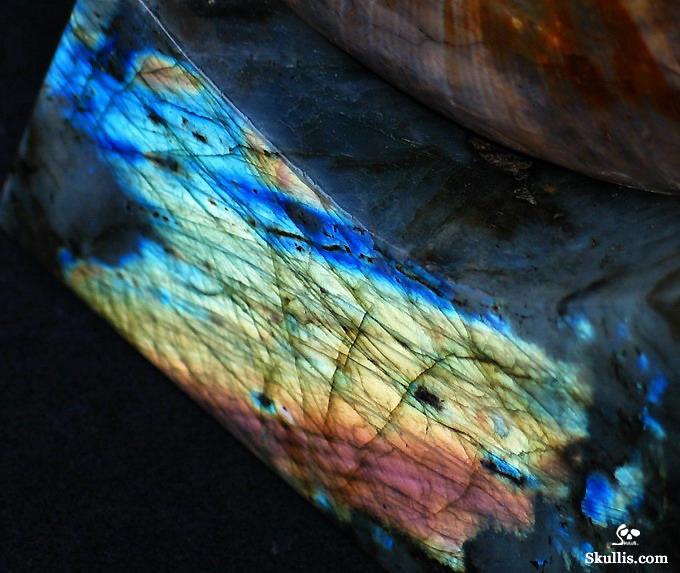 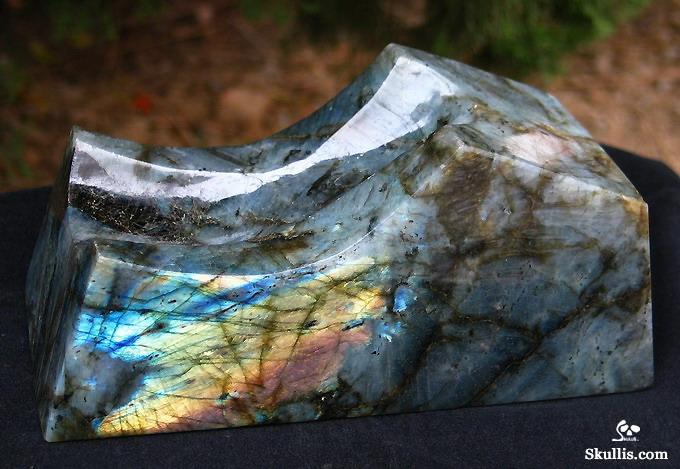 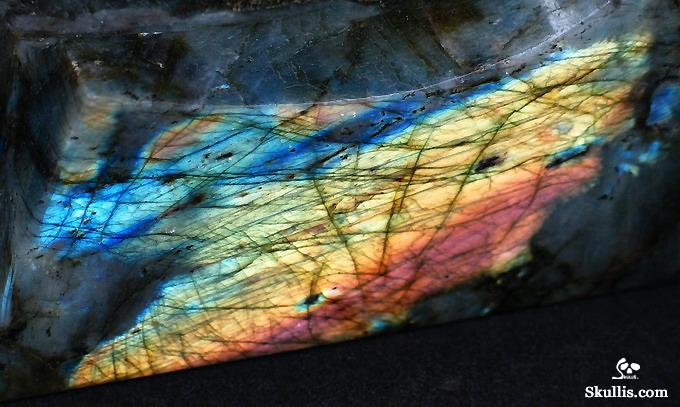 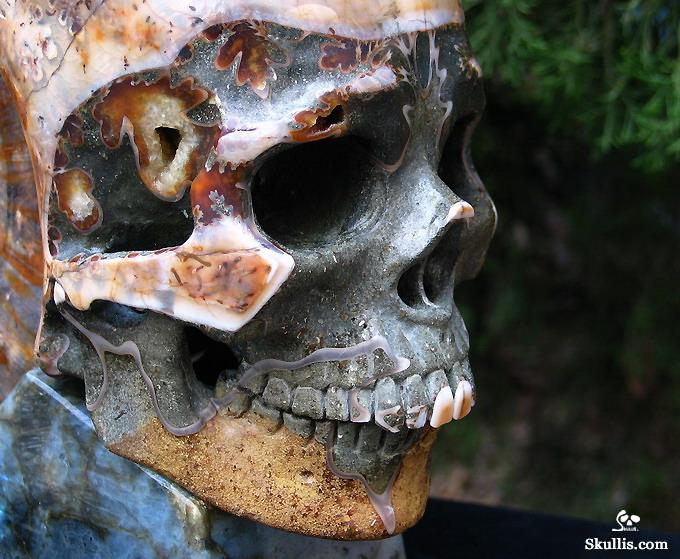 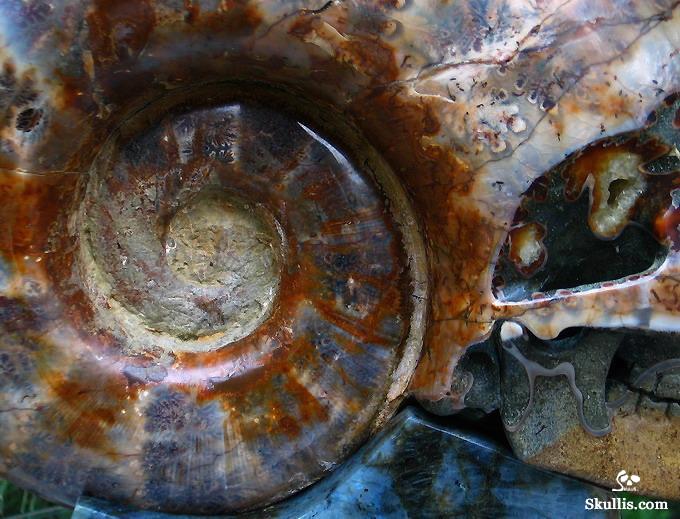 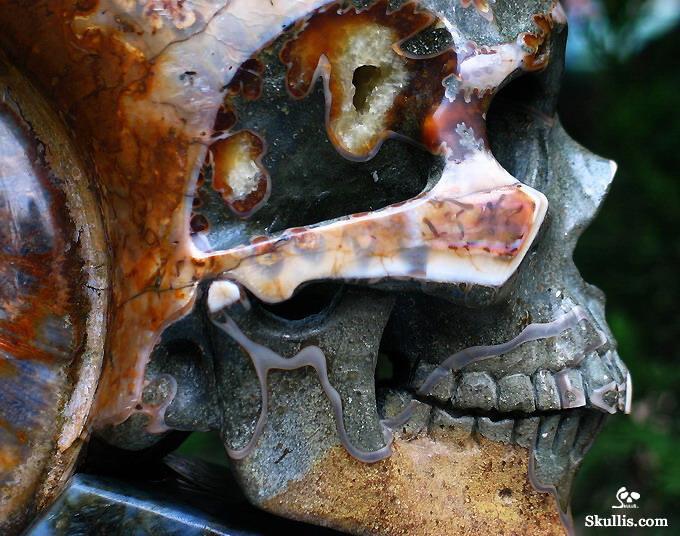 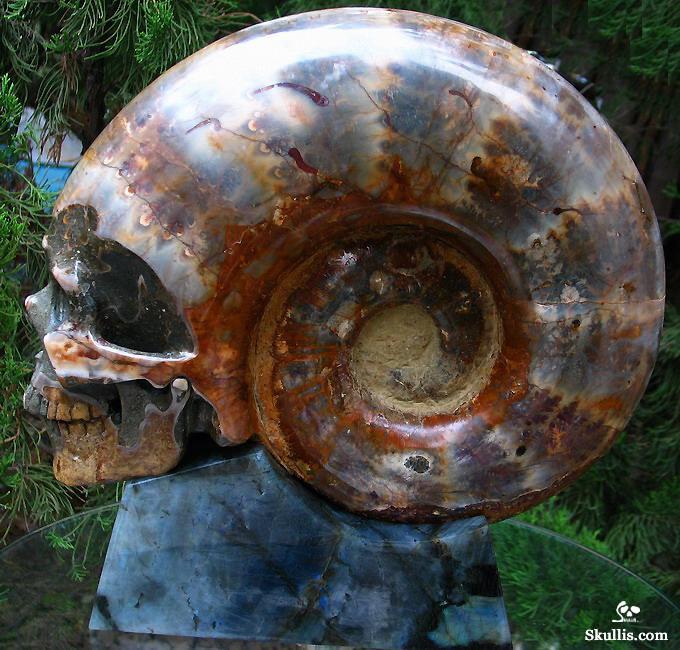 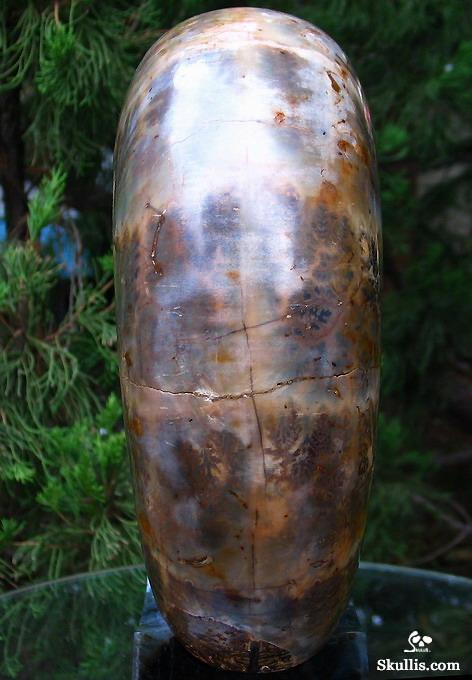 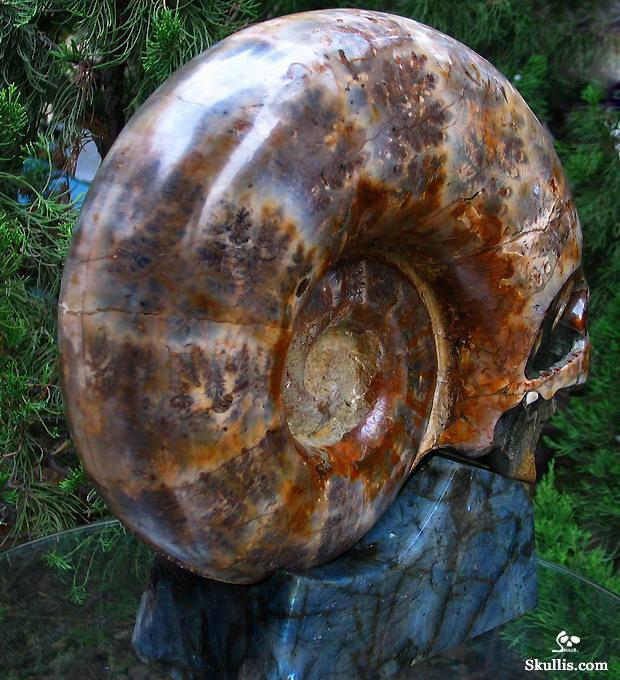 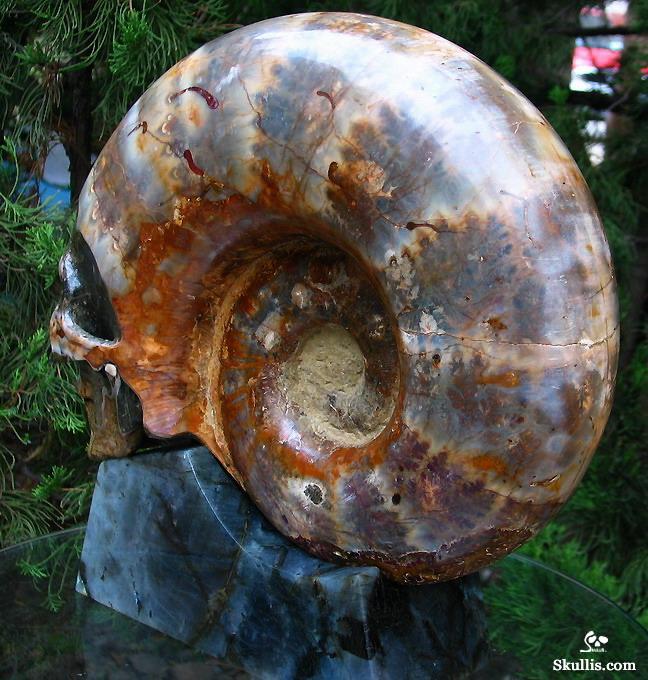 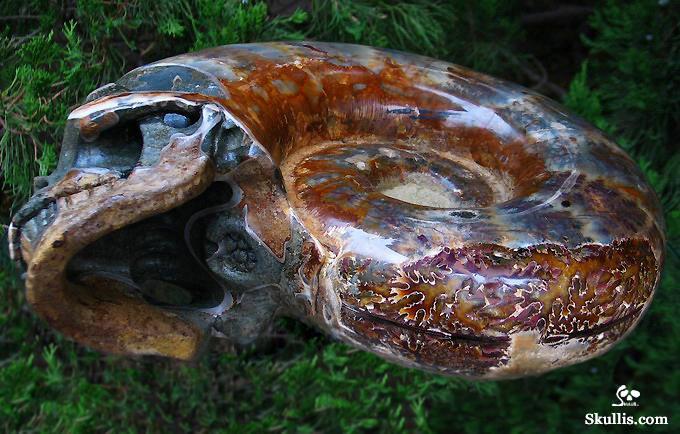 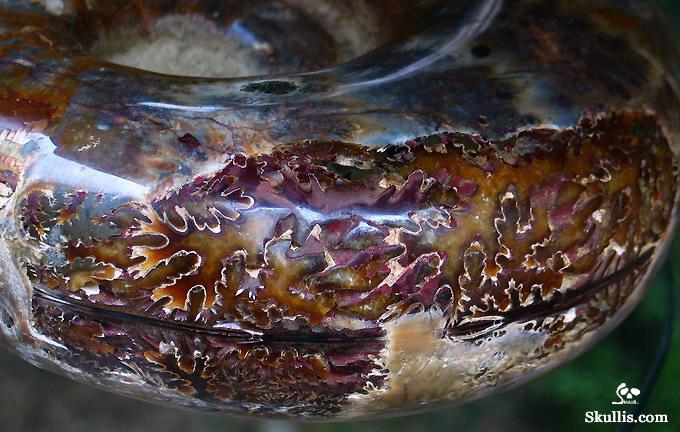 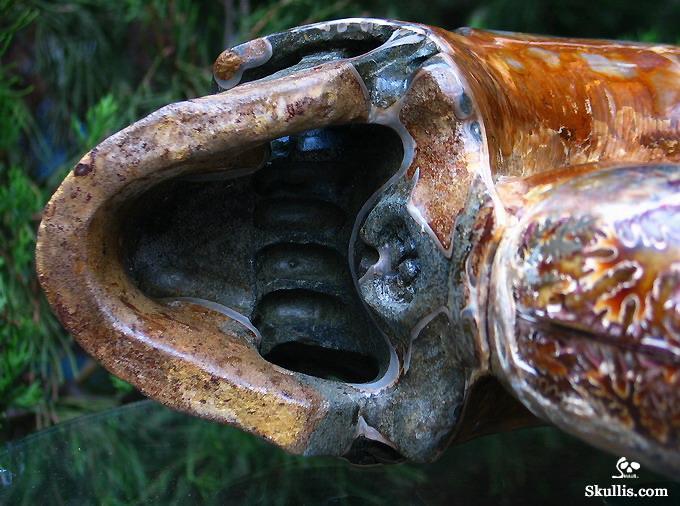 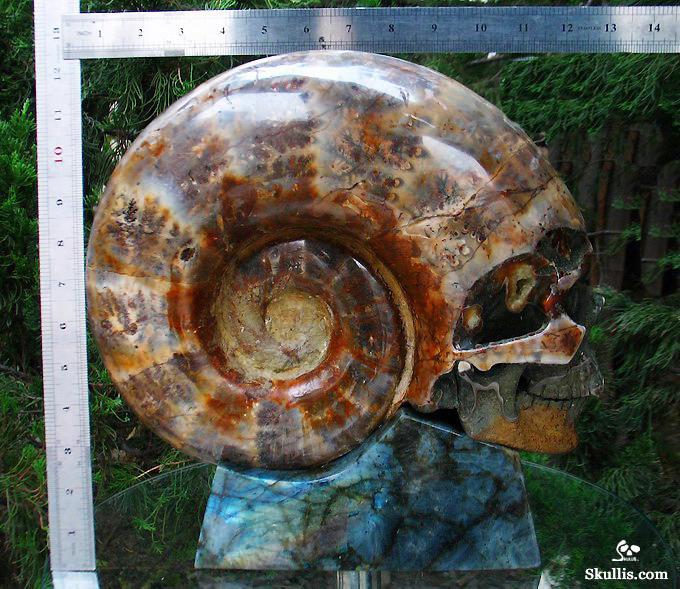 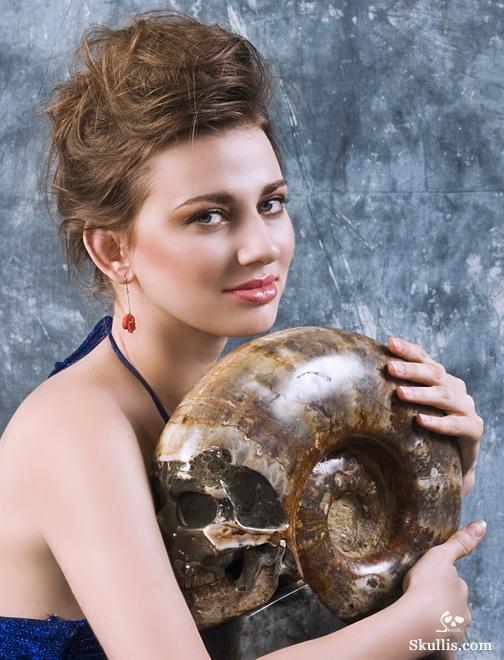 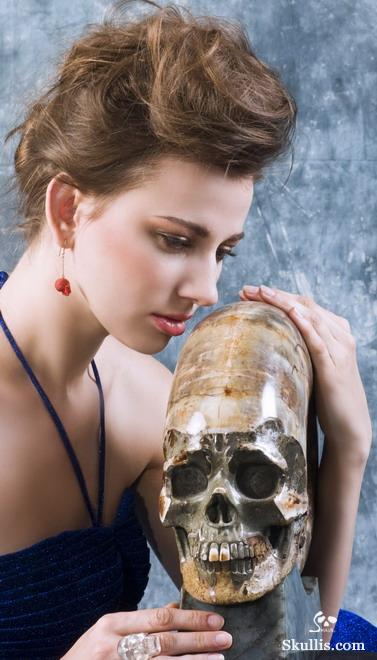 A massive ammonite fossil specimen collected from Madagascar, this crystal skull carving, Oceanus, sits proudly on its display stand carved from a large solid labradorite crystal. Standing over 12 inches tall on the display stand, this is a huge ammonite fossil and an impressive crystal skull sculpture that measures 12.6 x 4.8 x 10.1 inches (319x123x257mm) and weighs an incredible 30.1 pounds (13660g). The polished labradorite stand size is 8.3 x 3.7 x 3.9 inches (210x94x98mm) and is a spectacular specimen in its own right. In the light it “labradoresces” with an appropriately overall blue schiller effect, with some additional green, gold, and even the much less common and quite wonderful purplish-red coloring, giving Oceanus a watery appearing foundation to stand on.

Oceanus is masterfully carved by Skullis artists and has an awesome presence. The smooth and translucent fossilized shell gives Oceanus a cloudlike soft and inviting appearance. The sutures revealed by carving the ammonite fossil become amazing naturally added designs that complement the symmetry of the finished sculpture. This is an exceptional bonus to carving crystal skulls from ammonites, as such symmetry is rarely seen in other materials. The original shell remains to decorate the cheekbones, the front teeth, the outer brow ridges, and the bridge of the nasal cavity. Oceanus, at such great size, and especially when on the beautiful labradorite stand, is most definitely a spectacular crystal skull sculpture!

Oceanus, in Greek mythology, was considered to be the oldest of the Titans, son of Uranus and Gaia. Oceanus was the god of the river Okeanos, the great river that circled the world. It was believed to be the source of all fresh water including the rivers and streams, the clouds, and natural wells and springs. The river Okeanos as it encircled the earth, was considered a natural symbol of the eternal flow of time. The sun, moon, and stars were considered to rise from, and set into, the waters of Okeanos at the behest of Oceanus. In the Hellenistic Era, Oceanus became the god of the world ocean, and was considered to be the personification of the ocean. Oceanus was often depicted carrying his attributes of a fish, symbolizing bounty, a serpent to represent prophecy, and also could be shown carrying a steering oar and a ship, showing his control over the seas and the lives of those who travelled them.

This wonderful Oceanus crystal skull sculpture is presented to encourage us to keep in mind the interconnectedness of our world, and that what we do in one area, even the small and simple acts, can greatly impact the entire system. Oceanus encourages us to be mindful and act responsibly with our attention focused on conservation and preservation of one of the most beautiful and dynamic aspects of our world, the fresh and salt waters that we would not be able to survive without. It is easy for us to forget, and to lose sight of the global aspect, and even of the greater localities which we consider our immediate homes, during our daily activities. Oceanus inspires us to remember and to act according to the truth that there is, in fact, only one world river, and each of us is directly responsible for its health. Oceanus reminds us there is a vitality and a beauty worthy of maintaining, and each of us shares in this responsibility because it is in our best interest to do so.

More closely related to octopi, cuttlefish, and squid than the modern chambered nautilus, ammonites enjoyed a lengthy 175 million year existence in prehistoric oceans, with many genus and species rapidly evolving and disappearing during that time. Ammonites descended from the bacrites straight shelled cephalopods that lived around 415 million years in the past. The ammonites first arrive in the fossil record at a point of about 240 million years ago, surviving several extinction events. They continued until coming to their final extinction in company with the dinosaurs at 65 million years ago. The ammonite species fossils from the Upper Jurassic period deposits of Madagascar lived between 145 and 179 million years ago. It is believed that the majority of ammonite species inhabited the shallow, warm and temperate waters along the inner part of the continental shelves in around the world.

In order to create jobs in the country, Madagascar export law requires that all ammonite fossils from Madagascar be polished or altered in some way. Fortunately ammonites are much more lovely after this process. Here beneath the polished shell the interior of the ammonite has been revealed showing the “oak leaf” suture patterns, the amazingly complex and detailed growth patterns which have been replaced and preserved by calcite.

Having been discovered numerable times throughout recorded history, often by asking very simple and unrelated questions, the Golden Ratio, or Fibonacci Sequence, the consistently repeated pattern of nature growing and evolving, is represented here in this ancient fossil. This Golden Ratio is considered one of the forms of Sacred Geometry which reflects the universe, its pure forms, and the dynamic relationship we share with nature - the inseparable relationship of the part to the whole. By studying the Sacred Geometry of one thing we find meaning and structural insight into the workings of the inner self and other processes of the universe. Incredibly this spiral growth pattern occurs over and over in the universe around us, from the molecular structure of our DNA, to most plants, including cauliflower, cacti and succulents, daisies and sunflowers, many, many trees, pinecones and pineapples, shells of many invertebrates, and so on all the way out to the astronomical scale of the Milky Way and other distant galaxies! The ammonite is considered to directly connect one to the Golden Mean Spiral energies to promote personal growth, self-awareness, and the evolutionary consciousness of the Earth and the higher consciousness we all share.

Metaphysically, ammonites are employed for gaining insight of where to begin a process, and to maintain sight of the whole picture while focusing on the individual steps of that process. They are used for protection, structure, and stability, and to transform negativity into a gentle, fluent energy. Ammonites are also used to assist one with relaxation and to provide support and minimize depression that can be associated with the re-birthing process. In Feng Shui, ammonites symbolize longevity, harmony, and virtue and are used for prosperity, improved flow of chi, detoxifying the body, and are used to bring about good health, happiness, and wisdom. Physically ammonites have been used to ease the birthing process, and for treatment of issues with the extremities of the body and the lungs.

Labradorite symbolizes the sun and the moon, and it balances these energies as well as enhances them. Considered a Stone of Magic, labradorite facilitates travel from one plane of existence to another, and across the universe, during the pursuit of knowledge and guidance, and does the same when applied towards matters of introspection of the spirit, intuition, and psychic talents. In all of these applications labradorite can lead the way as a guide and assist with the understanding of the knowledge received.

Labradorite is referred to as the “temple of the stars,” and believed to carry the light energy of other planetary beings to the soul of the user and the Earth plane. The Inuit people believed labradorite was from the northern lights, the Aurora Borealis, which is caused by charged particles from the sun’s atmosphere colliding with gaseous particles in the Earth’s atmosphere.

Labradorite is a great protection stone, shielding us by strengthening the aura and our natural energies. Labradorite protects from negativity and misfortune in this world while exploring others through meditation and visions, as well as while exploring in the past and the future.

Labradorite enhances magical abilities and aspects of intuition such as clairvoyance, telepathy, prophecy and conscious direction of serendipitous events. It assists with communication with higher spiritual guides, psychic readings, and past life recall. Labradorite allows for a smooth transition between worlds and states of being, keeping one safely grounded during the journey.

Labradorite encourages cooperation, congeniality, and courtesy, and it assists to instill a sense of belonging to part of a group. It can help reduce the tendency to judge others as well as helping to prevent feelings of depression or shame.

Labradorite is used to increase sensitivity in the hands, enhancing the skills of healers and energy workers who use their hands.

It is used to bring calm to the mind and energize imagination to allow for original ideas, and can be used to help one to find joy, adventure, change, and spontaneity in one’s life again. It can energize one emotionally, preventing the feeling of being drained or weighed down by responsibilities. Labradorite facilitates introspection and thoughtfulness, and gives one intellectual clarity and intuitive wisdom to allow one to see through illusion to the cause of an issue, and to find a resolution and bring peace. It helps to dispel fear and insecurity by bolstering faith, self reliance, and trust in the universe.

Labradorite is an excellent stone for communication and helps us share our true selves. It is very effective in uniting the chakras. Labradorite aids shamans, magicians, and Light workers to penetrate the veils of the Void and access the place of all knowledge and possibilities and the source of creation, providing protection on the journey and during subsequent recall. Labradorite also protects the aura and prevents energy leakages and stops the attempts of others who would drain personal energy. It balances and empowers all elemental forces within one’s system. It is also a good tool when conducting radionic analysis and treatment with a goal of finding problem areas.

Labradorite encourages optimal health of the lungs, the brain, and the digestive system. It has been used to clear the eyes, to treat disorders involving the brain. It can be used to treat issues of dis-ease of the respiratory system including colds, bronchitis, and other similar issues. It can also be directed towards reducing the symptoms and effects experienced during menstruation, PMS, and for relief of pain in general. Labradorite is used to lower blood pressure and reduce one’s sensitivity to cold. It is also used to ameliorate gout and rheumatism, and to aid in the proper functioning of the digestive system and in the absorption and proper use of nutrients.

NOTE: Skullis does not prescribe treatment for medical issues. Skullis offers information for reference to assist with the selection and understanding of crystal skulls, including this ammonite crystal skull sculpture and the accompanying custom labradorite crystal skull stand.