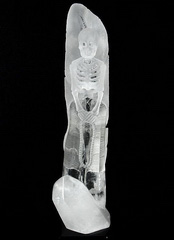 The Feather of Truth crystal skull sculpture inspires each of us to live our lives based on a moral code of honesty and integrity in all aspects of our relations, including with ourselves, our family and friends, with other people, with our world, and spiritually.

The Feather of Truth encourages each of us to accept unconditionally different people and cultures, and those people and ideas that are different than our own personal preferences and values.

The Feather of Truth promotes balance, order, and truthfulness and honesty in our lives and our interactions. This is the same universal balance that regulates the seasons and relationships between celestial bodies. It is this sense of balance that The Feather of Truth encourages us to apply in every situation we are dealing with. The Feather of Truth crystal skull sculpture reminds us that even the uneducated and inexperienced are aware of the fundamental differences between what is right and good and what is wrong and hurtful to oneself and others.

The Feather of Truth quartz crystal skeleton and feather crystal skull sculpture encourages us to openly experience the unity within ourselves that connects us to the entirety of the universe, and inspires us to express this state of harmony in every aspect of our lives by offering our love and compassion freely and without bias.

Along with the aspects of travel, truth, speed, flight, and Lightness, feathers symbolize higher thought, ascension, spiritual growth, and evolution. Feathers represent prayer, communication with Spirit, and wisdom, and the Native American Indians consider feathers to be symbolic of the power of the thunder gods, of the air, and of the wind. Native American Plains Indians considered feathered headdresses to be highly spiritual and magical, and they were worn to protect the wearer from injury and harm. One would have to earn the feathers of a headdress through acts of bravery and good deeds for the community, each feather representing one deed.

As a Celtic symbol the feather again represents the knowledge of the spiritual realm, and feathers were used to invoke the sky gods to allow passage from the physical realm to the ethereal realm.

Egyptians also held the belief that feathers were symbolic of the gods of the sky, and after death the soul of a person would be weighed and compared to the weight of a feather to determine its worthiness.

In Christianity feathers have represented virtues, particularly three feathers together symbolized charity, hope, and faith, and a ring with a signet of three feathers was worn to symbolize a virtuous soul.

Feathers are considered to convey the message to continue on the spiritual path one is on, and can also be a sign to encourage one to remember to laugh. Feathers indicate that, instead of taking things so seriously all the time, one needs to lighten up and find joy in one’s situation. Feathers also are symbols of progression, divinity, enlightenment, and heightened awareness.

Black obsidian has been used for scrying and facilitating intuition for thousands of years. It is an excellent stone to assist in seeing past illusion to discern truth, and to understand universal and spiritual laws, and oneself. Obsidian is considered an extremely effective stone of protection, and a very powerful energy mover, as well as an excellent filter for absorbing negativity from its surroundings. Obsidian can be programmed to transmute this negativity to a different expression of energy, or can be cleansed regularly by smudging with smoke, washing with running water, associating it with other crystals, and more methods.

Obsidian is effective for removal of blockages and bringing courage to face and overcome fears. Black obsidian is commonly considered to be quite powerful and caution is recommended when using it. It is wise to be prepared for the speed of the transfer of energy and information. Conscious programming prior to use is one way to address this quality of black obsidian. One explanation for the excessive power of obsidian could be the elemental forces at work during its formation. Volcanic lava, Earth and Fire, join with Water to cool the material so quickly there is no time for crystallization.

Black obsidian possesses an excellent grounding energy, and assists one to find and maintain a clear and focused mental acuity. It can help to temper emotional reactions and bring balance and consideration to one’s life and mental processes. It protects against negativity and assists one to release disharmony, resentment of self and others, and anger and fear caused by one’s reactions to the situations and challenges one faces as a part of life.

Physically black obsidian is used for pain relief and detoxifying the body. It speeds healing of wounds, improves circulation and brings warmth to the extremities, assists in the digestion processes, helps reduce cravings for foods, and can be helpful for reducing an enlarged prostate.

NOTE: Skullis does not prescribe treatment for medical issues. Skullis offers information for reference to assist with the selection and understanding of crystal skulls, including this quartz skeleton with prayer beads and feather crystal skull sculpture with black obsidian stand. 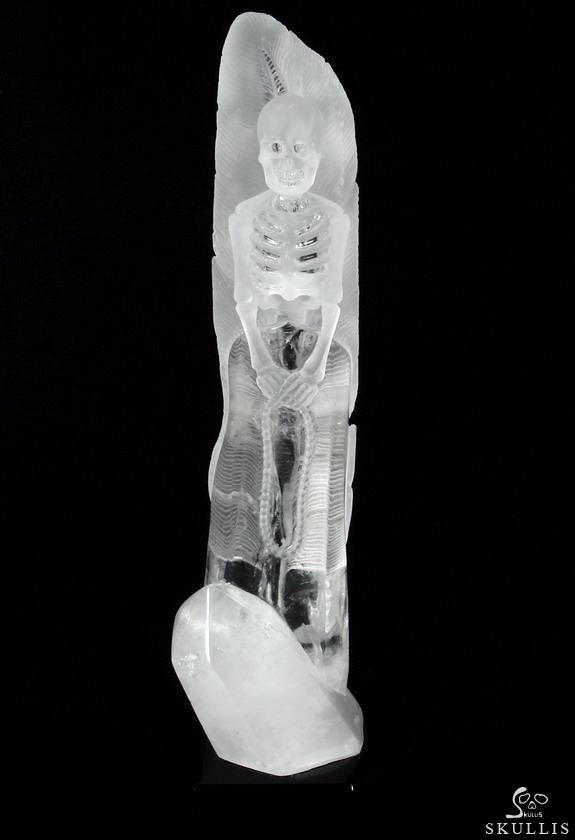 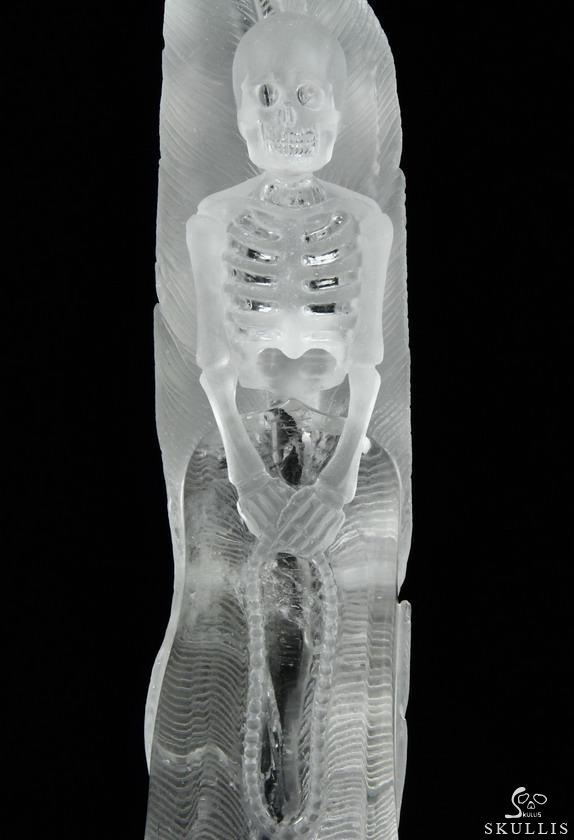 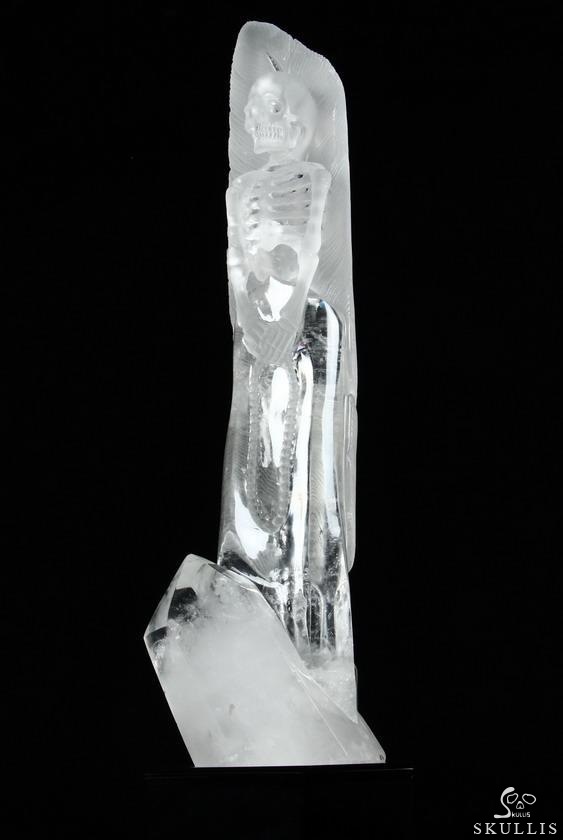 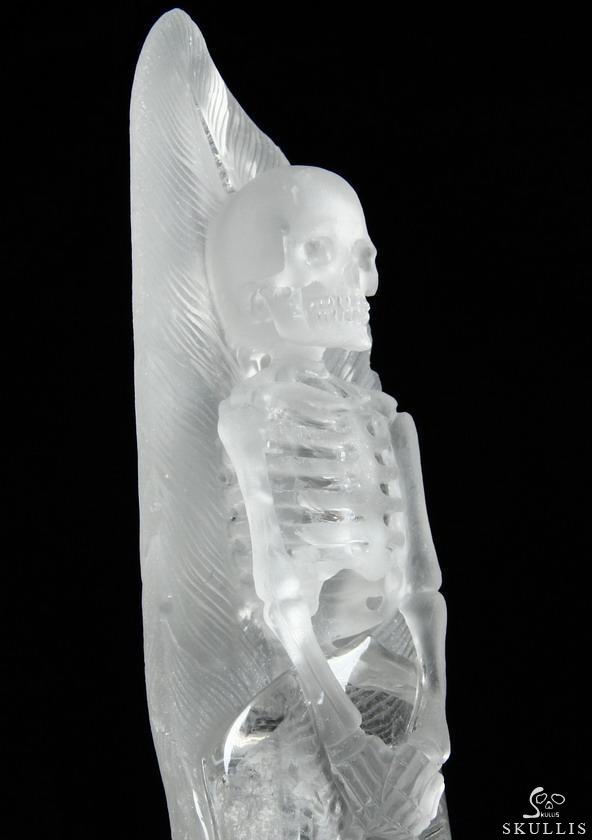 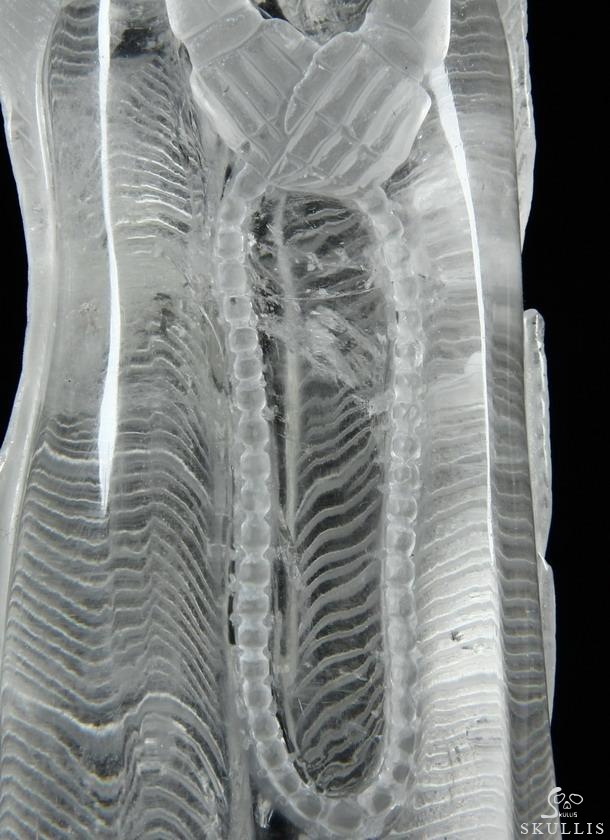 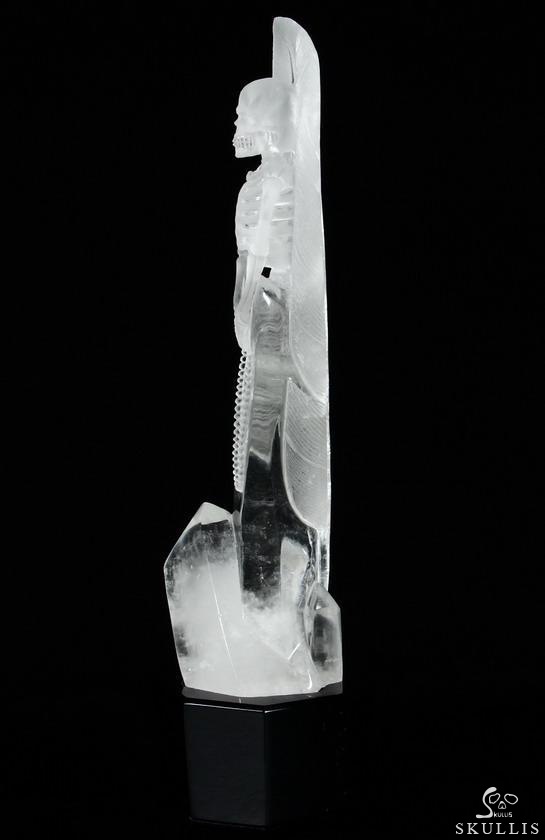 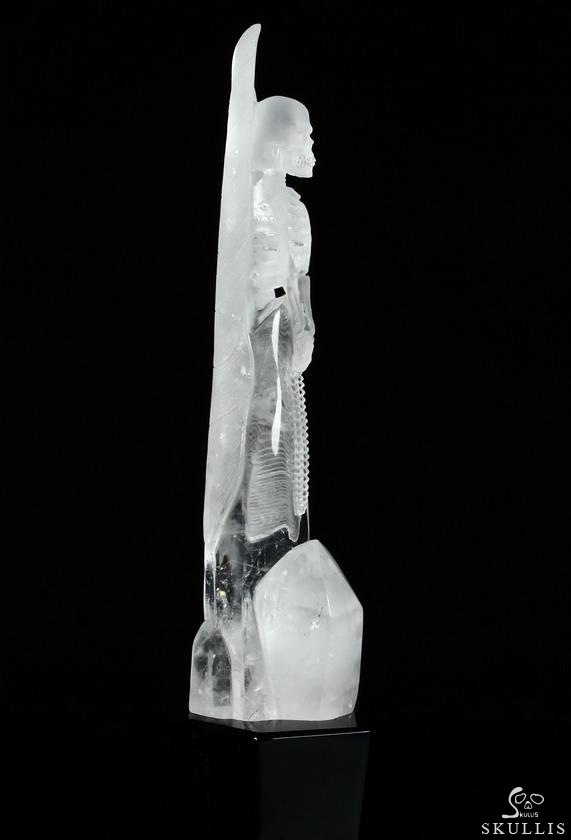 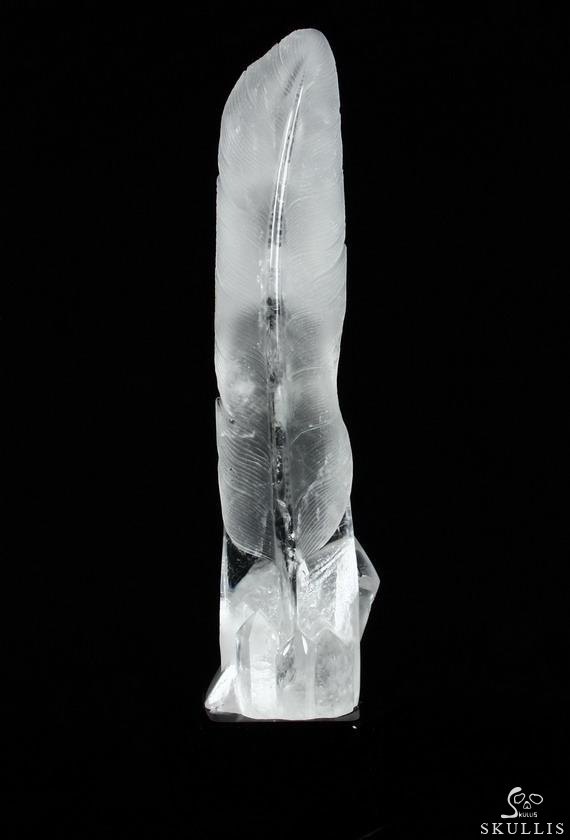 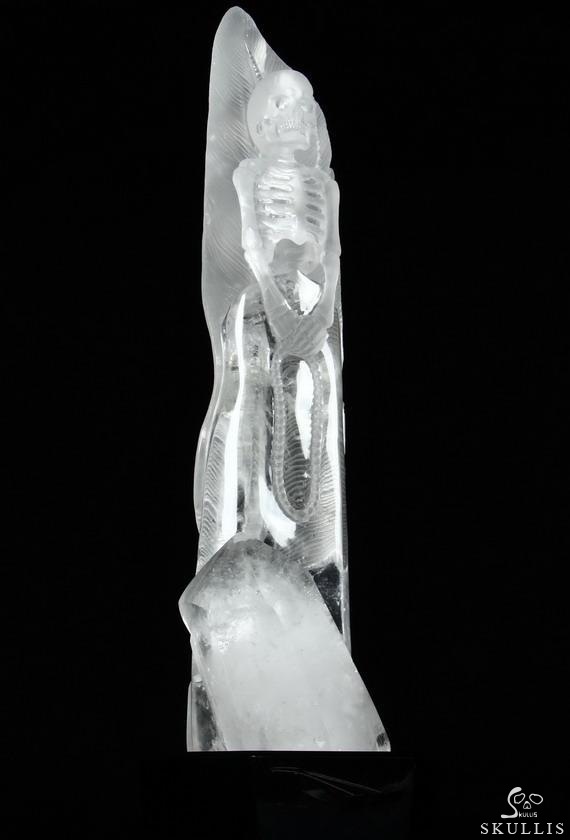