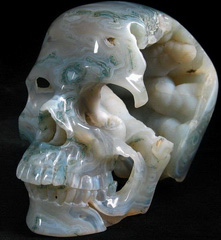 A spectacular specimen of green moss agate, Nature Deva has an incredibly beautiful interior geode cavity with surging billows of fine white drusy quartz crystals. Transparent and translucent, with the perfect amount of green dendritic manganese crystallization within the agate, this is a highly detailed Super Realistic Skullis crystal skull sculpture. Creamy whites, milky transparencies, and light and dark greens make a wonderful accompaniment to feature the amazing light blue veins and crystal druse filled vugs. Nature Deva gives the overall feeling of harmony and peace, with lush green islands decorating an ocean of blue and white, or mountain tops hidden beneath clouds bringing fresh rain, or perhaps of new growth of spring peeking out from under a blanket of winter snow that sparkles in the sunlight. Nature Deva reminds us that we are one part of a superorganism we call Earth, and that the beauty of life is not only at the surface and visible to our eyes, but inside as well, not always where we might expect to find it. It's a good idea to learn to see the miracles of the natural world, and to gain wisdom from our observations.

A variety of chalcedony included with dendritic crystals of manganese or iron that look like moss or lichen, green moss agate is an excellent crystal for connecting and communicating with the natural world, nature spirits, and particularly with plants of all kinds. It is also a stone of wealth and abundance. This makes green moss agate especially useful for growing plants and agriculture, increasing the health, growth, and productivity of plants. Green moss agate teaches and reminds us that the world is a living physical and spiritual being and that we should alter our perceptions to align with this reality. Green moss agate enables one to perceive and appreciate the unique beauty inherent in every person and everything.

Moss agate is used to expand a business, to generate new business, and to gradually increase income. It assists in creative thinking processes for new approaches to business, encourages and supports entrepreneurs as well as large businesses, influences one to retain and build financial savings, and assists when paperwork and figures are overwhelming and problematic.

Green moss agate is considered to bring new friendships and attract new love and reconnect with lost love. It helps one to understand and focus on one's Higher Self, and to release negative discordant behaviors caused by emotional trauma and/or karmic events from past lives by replacing the behaviors with the knowledge of one's spiritual existence and the accompanying perspective that brings. Green moss agate helps one to stay aware of these behaviors until the desired goal of change has been accomplished. It increases one's conscious knowledge of the oneness and collective consciousness, and it enables one to examine events in life and to see how those events affect spiritual growth and finding peace.

It is said agates, including green moss agate, operate at a lower energy frequency than most crystals, which makes energy and information transfers much more gentle and easier to adapt to. Green moss agate is extremely calming, bringing peace and relaxation, reducing and removing tension and anxieties. It gives one the time and perspective to enjoy the world around them, a chance to catch one's breath, rather than being caught up in the small details that often overwhelm and distract from finding harmony and balance in one's life.

Moss agate is used to reduce the body's sensitivity to weather and the accompanying related discomforts. It is effective in bringing balance to weather patterns and has been used for cloud bursting. It is an effective purifyer of the environment and of the mental, emotional, and spiritual aspects of our being, filtering negativity to change it into productive and supportive life force energy, thereby healing emotional turmoil and discord. It can be very helpful in changing undesired thought processes to reach a more optimistic perspective.

Encouraging patience and tranquility, moss agate is useful to calm and balance the thoughts, feelings, and mental processes that result in excessive mood swings, emotional drama, and unsteady tempers. It helps one to let go of fear and stress that control behavior and allows one the room to grow. Green moss agate helps one to see oneself as a good person, strengthening one's positive characteristics, and aids one in finding harmony with others. Green moss agate enables one to maintain a positive outlook when facing diffcult experiences, depression, frustration, and despair, and encourages one to continue forward, to overcome challenges by means of trust and hopefulness.

It brings strength and endurance to the body in response to stress, and helps to keep one centered, feeling sturdy and grounded. It is useful for supporting and following exercise programs, body building regimens, and physical therapies and practices.

Green moss agate is considered to be an excellent healing crystal, enabling the interaction with the body's organic systems. It aids in the healing process after the experience of illness and dis-ease, assisting in recuperation, and it is also effective for recovery from addiction.

It is helpful for balancing the left and right sides of the brain which results in the eradication of depression that can be caused by such disharmony. It stimulates concentration, perception, and diagnostic and rational abilities of the mental processes.

Moss agate helps in the treatment of long term illness and recovery, fortifying the immune system, infections, swelling, and colds and flu, and helps to prevent hypoglycemia and dehydration. Used as a topically applied elixir, it is helpful for skin irritations and infections, and is anti-fungal.

Green moss agate strengthens and brings a steady rhythm to the heart, regulates the pulse, and aids the entire circulatory system. It also stimulates the digestive system, relieves gastritis, and helps to remove toxins from the body. It is said to relieve buzzing of the ears.

As a stone of commencement and embarkation, green moss agate is a very good stone for midwives and for aiding in the birthing process, reducing pain and giving a balancing and calming supportive energy for mother and child.

Green moss agate is a stone of the senses. It helps to enhance the keenness of the senses, yet can also be used to diminish them when necessary. It is also said to help reduce and prevent food sensitivities. 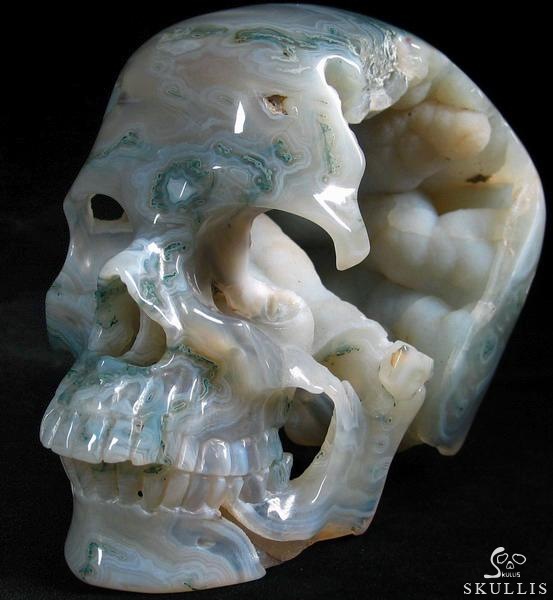 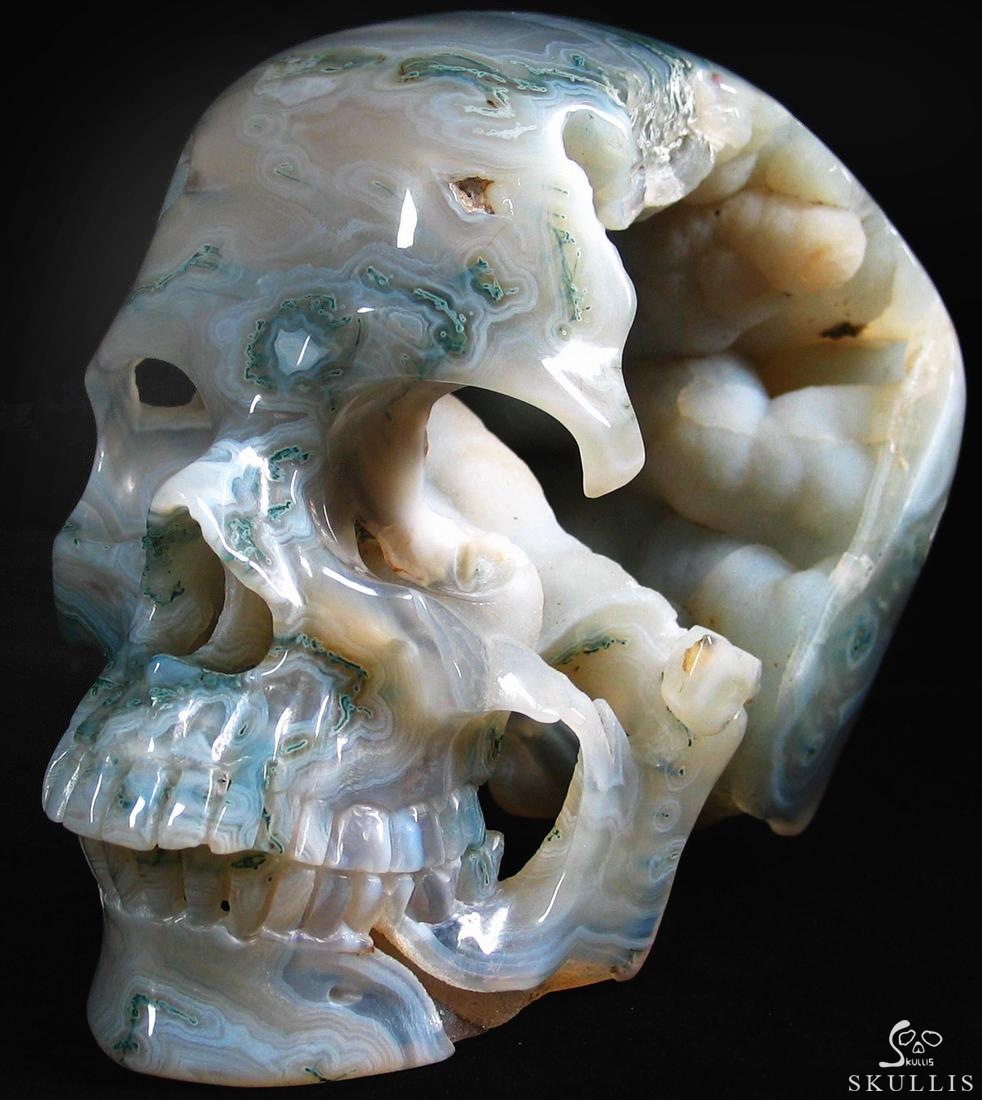 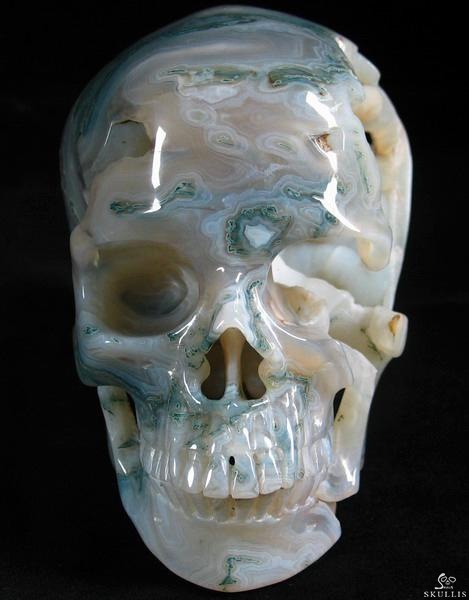 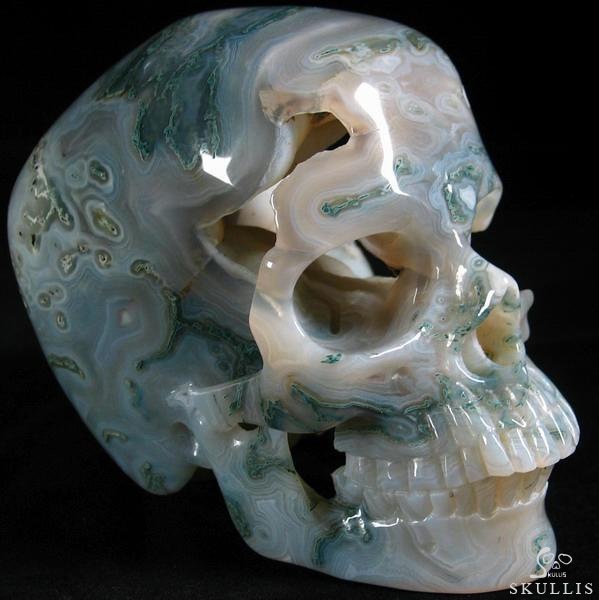 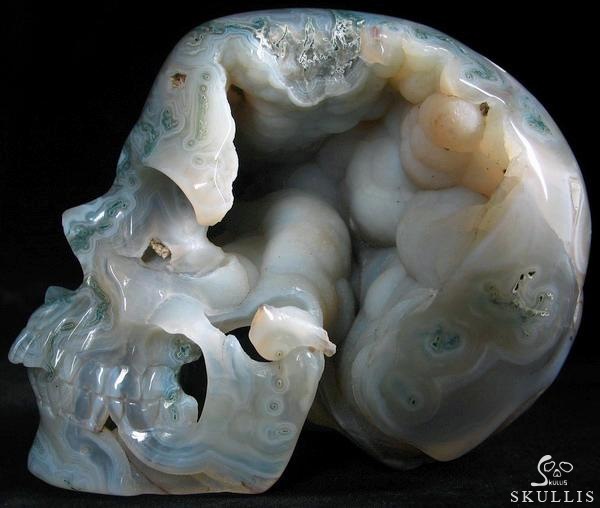 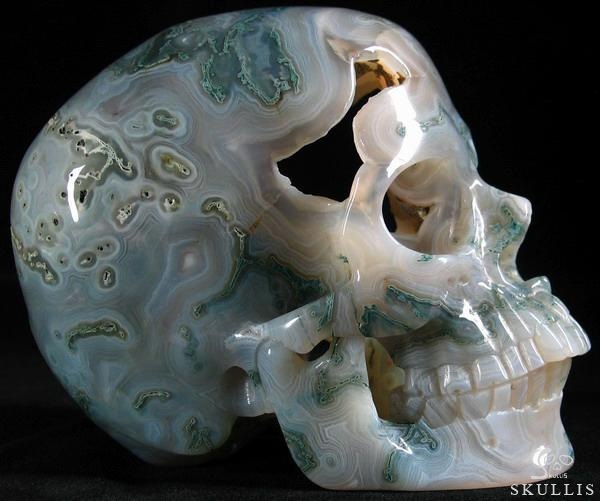 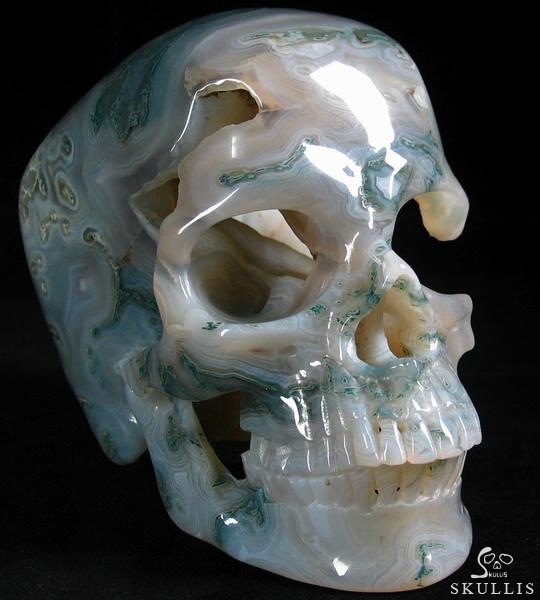 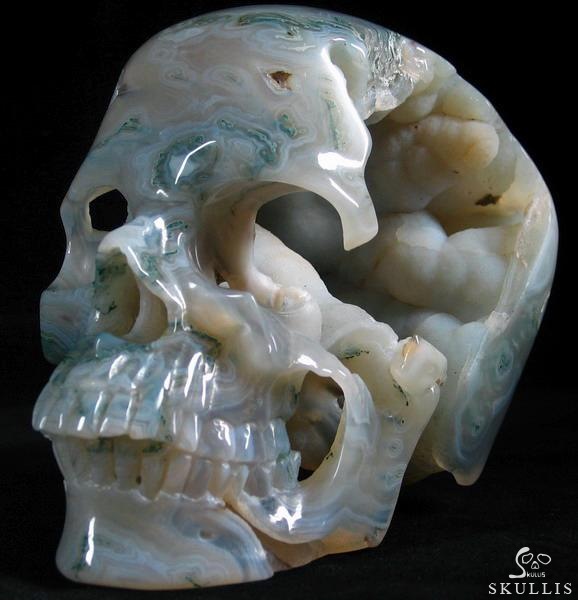 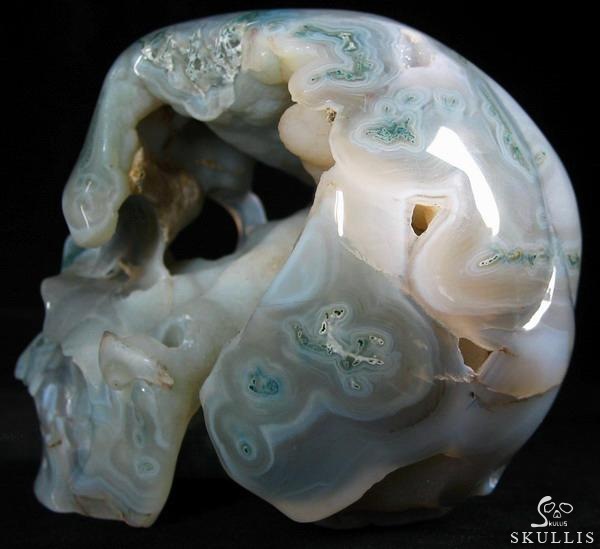 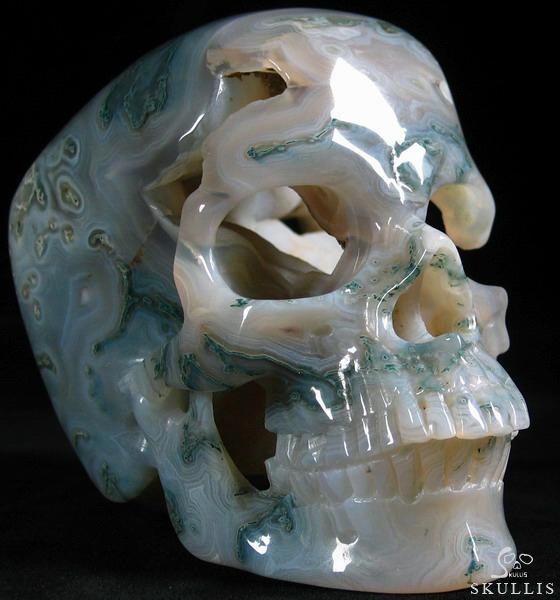 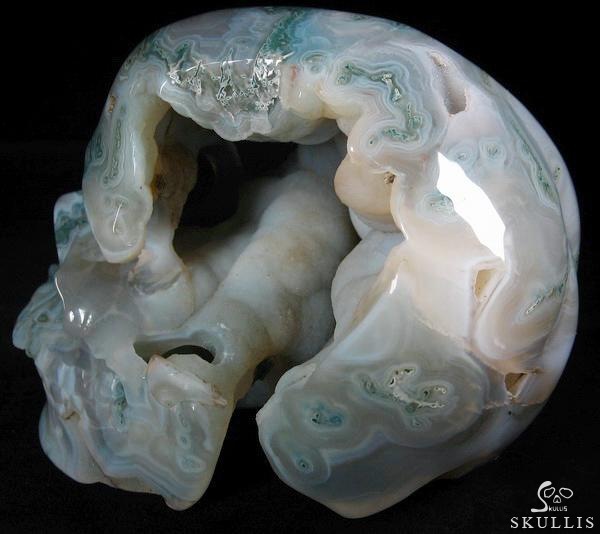 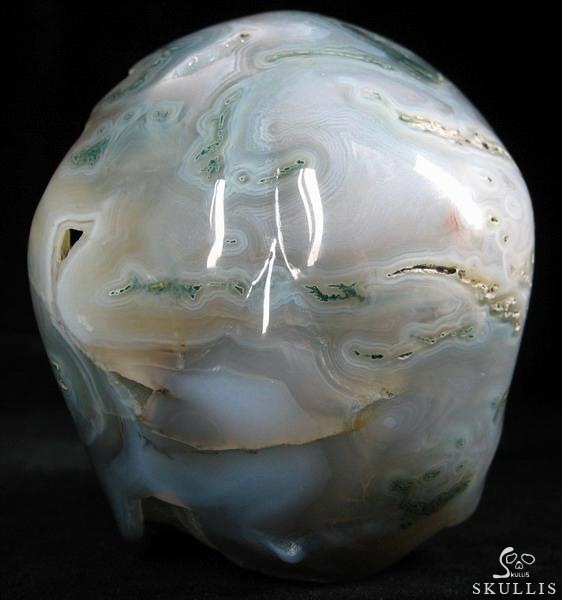 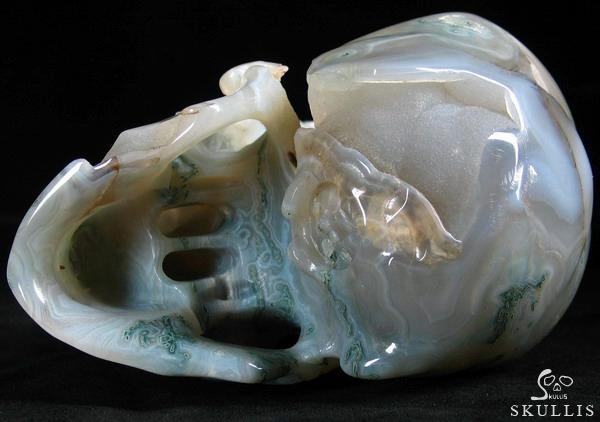 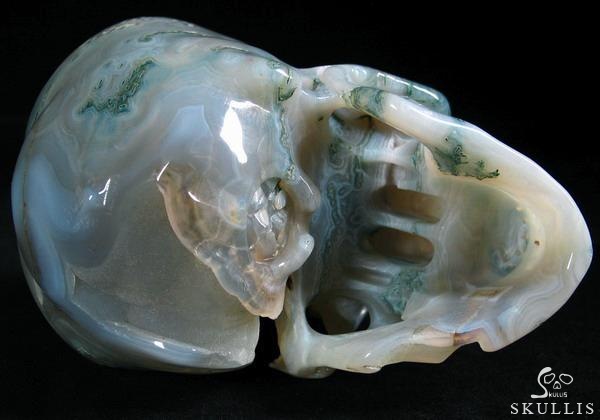 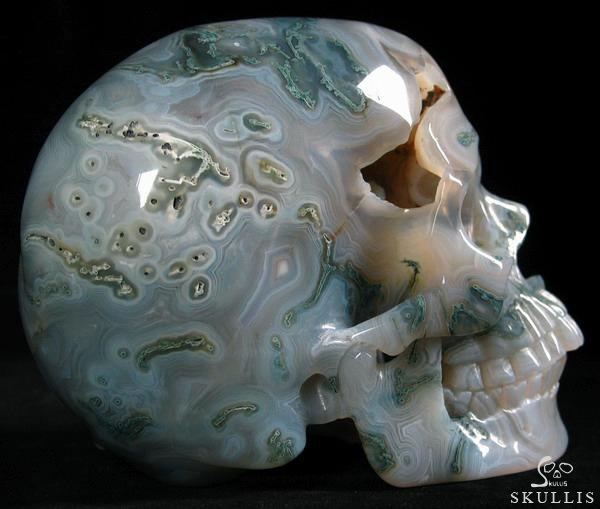 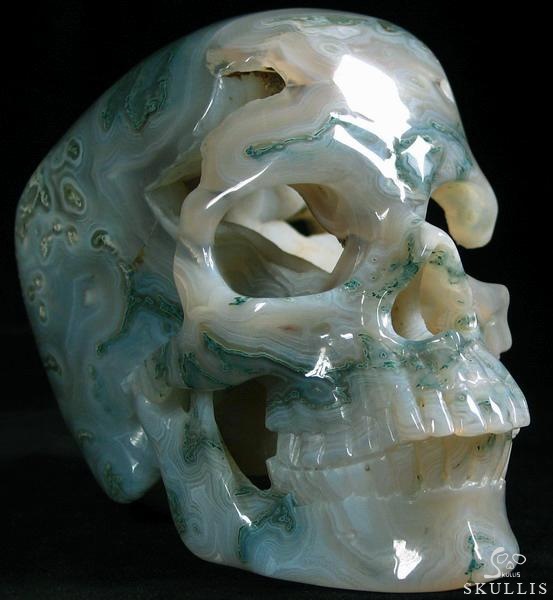