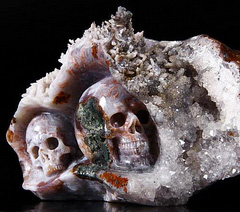 Wall Dive is a most remarkable agate geode specimen, full of energy and dynamism. Skullis found this agate geode druse piece at the Gem Exposition, and though it was placed in an inconspicuous location, the piece stood out and called for our attention. The coloration is stunning, with varying bands of translucent and milky agate forming wonderful patterns across the entire piece. The natural formation of the crystal clusters pointing in every direction immediately reminded Skullis artist and designer Steven Z. of the fabulous beauty of the coral reef walls of the tropical seas, where a myriad of life forms cling to sheer vertical cliffs, swaying back and forth in the currents, suspended above a seemingly bottomless ocean.

The two crystal skulls of Wall Dive have found a niche in the cliff. There they observe the energetic proceedings of the crystals of this empowering and vitalizing agate geode. Wall Dive is a powerful agate geode. It inspires and intrigues, as one follows the patterns in the agate and moves through the crystal coral structures, arousing a thoughtful contemplation of ideas, of one’s life experiences, of what may be ahead, and of so many other possible reflections and speculations. Wall Dive naturally guides one into a state of relaxation and meditation, sharing a peaceful energy very similar to sitting in a garden, shaded by a tree overhead, surrounded by flowers in bloom, swaying in the current of a soft breeze. The vitality, uniqueness, and individuality of Wall Dive is quite profound.

Agate is used to bring prosperity. Agate is also used to avert from lighting and stormy weather (physically and metaphysically). Agate provides strength, helps us to have patience and courage, and its calming effect allows for finding inner peace.

Agate stimulates the digestive system and relieves gastritis, the inflammation of the lining of the stomach. Agate is used to promote a state of good health for the eyes, hollow organs such as the heart, stomach, intestines, and uterus, and is used to heal skin disorders. It has been used to alleviate itching caused by insect bites. Agate assists the heart and blood vessels, strengthening the heart and also healing emotional discord that may be blocking one’s ability to accept love. Agate has been used to cure fever and reduce the symptoms of epilepsy, and may help some people with somnambulism. Agate is also used to cleanse the lymphatic system and the pancreas.
The geode represents fertility, creativity, mother earth energy, protection, and is excellent for grounding. Geodes have been used to increase fertility and creativity, offering powerful protection during pregnancy, childbirth, and for small children. Geodes represent the Creatrix form of the goddess and connect the earth with the universe. Geodes also represent both the male and female reproductive systems, especially the womb. Geodes amplify the energies that are directed to them, including the energies of other stones and thought energy, and are considered effective at enhancing the harmony of family and home, and to enhance the flow of chi, life force energy.

NOTE: Skullis does not prescribe treatment for medical issues. Skullis offers information for reference to assist with the selection and understanding of crystal skulls, including this agate geode crystal skull sculpture. 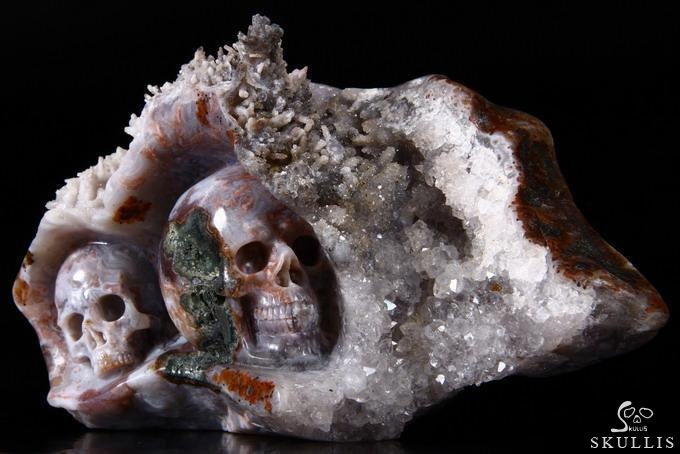 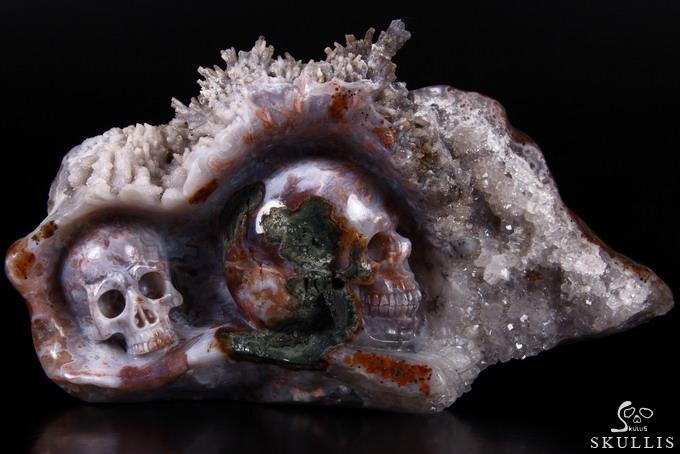 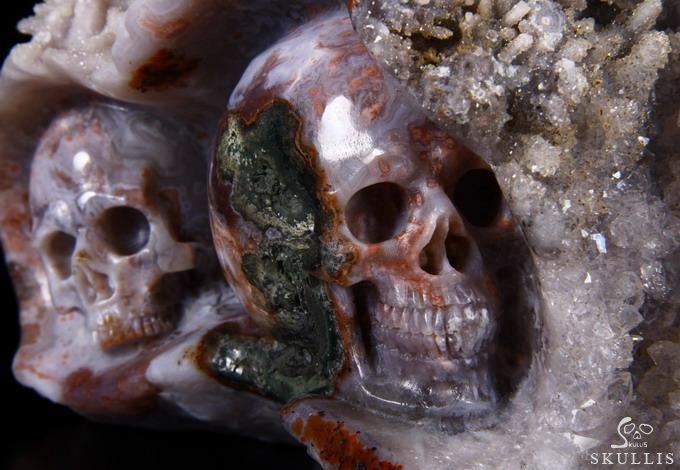 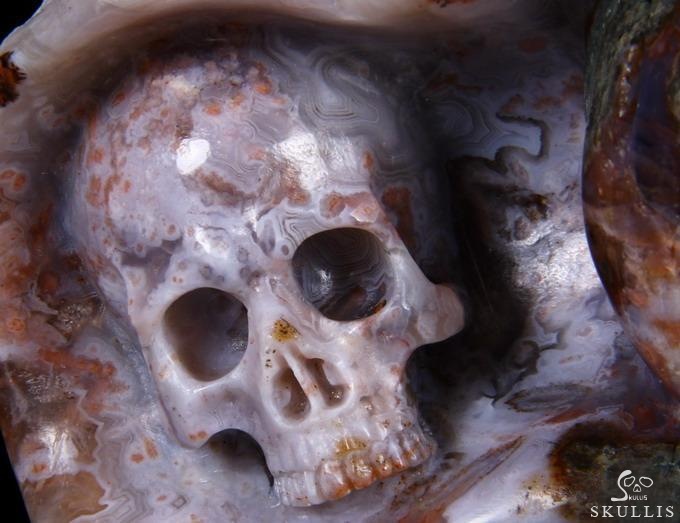 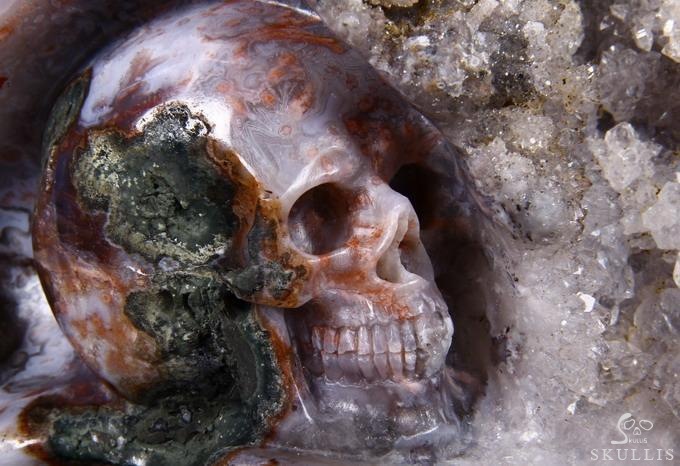 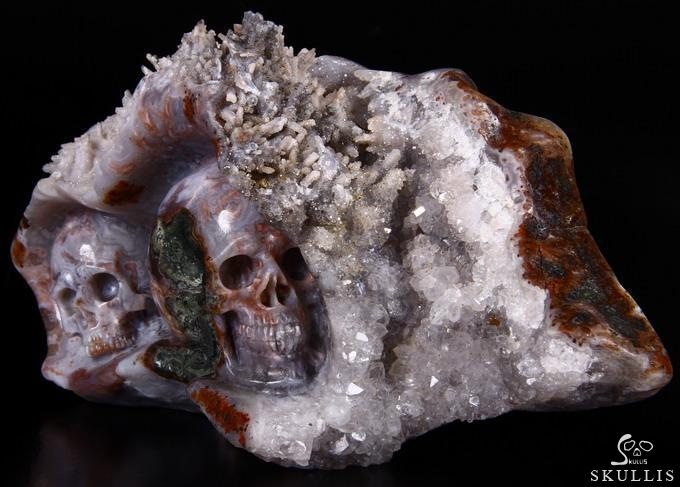 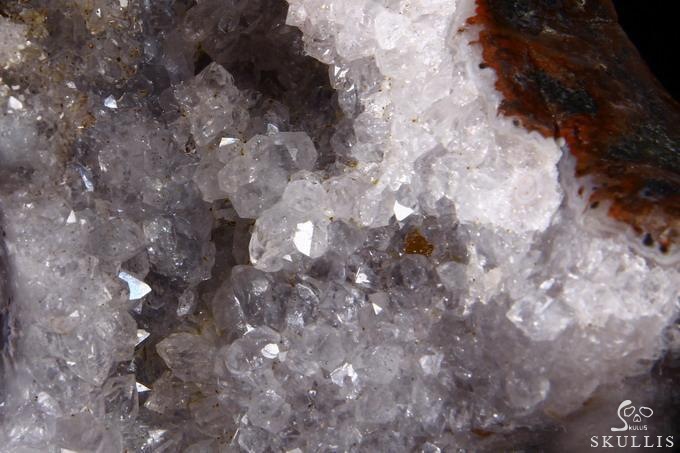 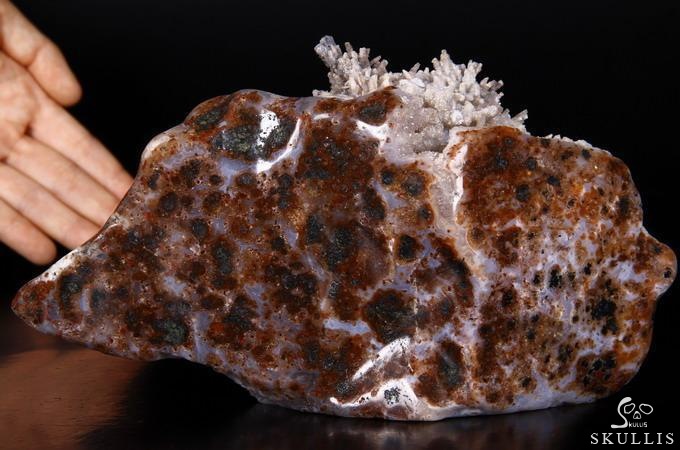 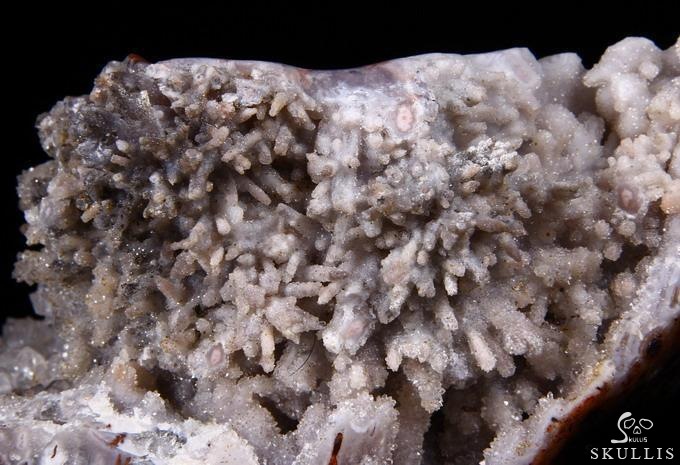 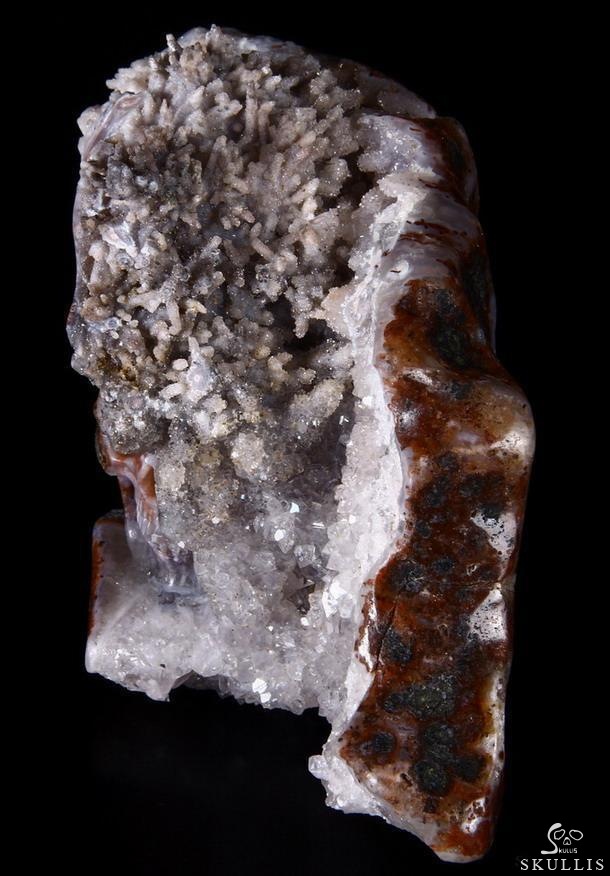 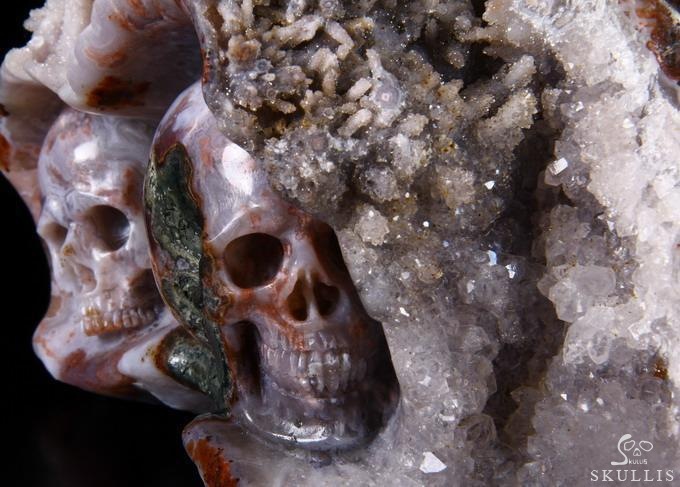 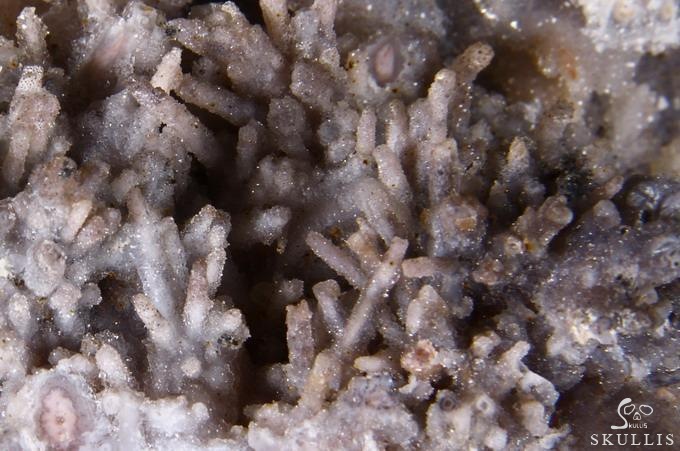 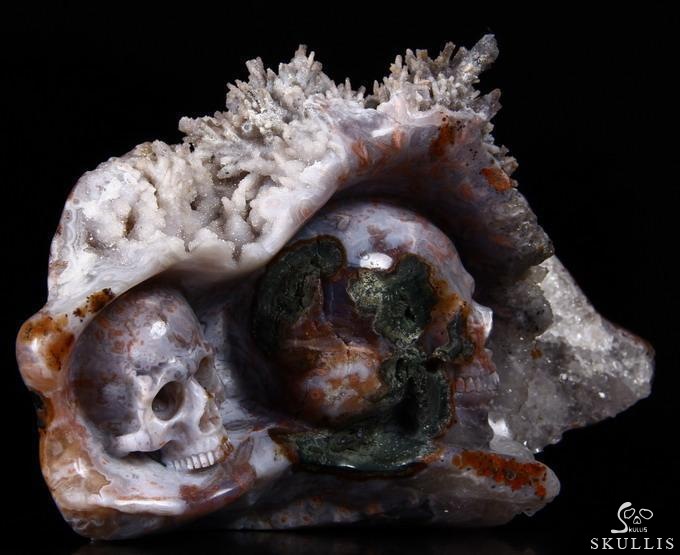 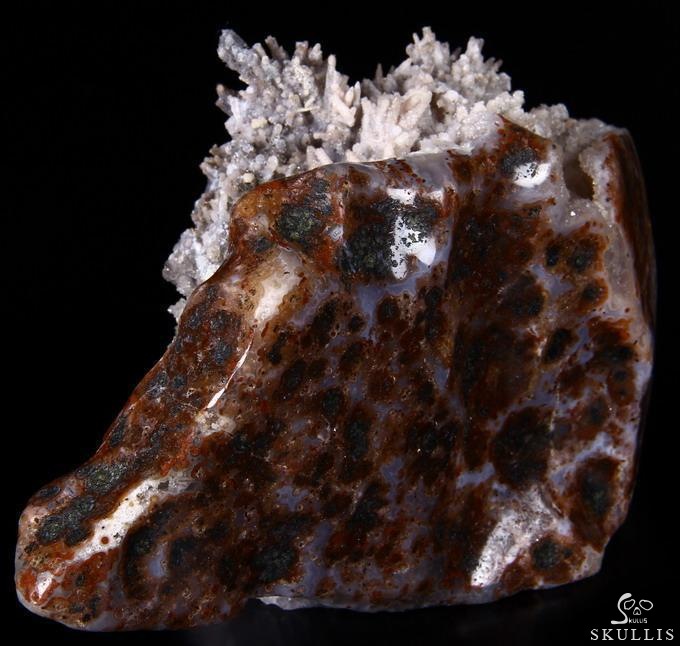 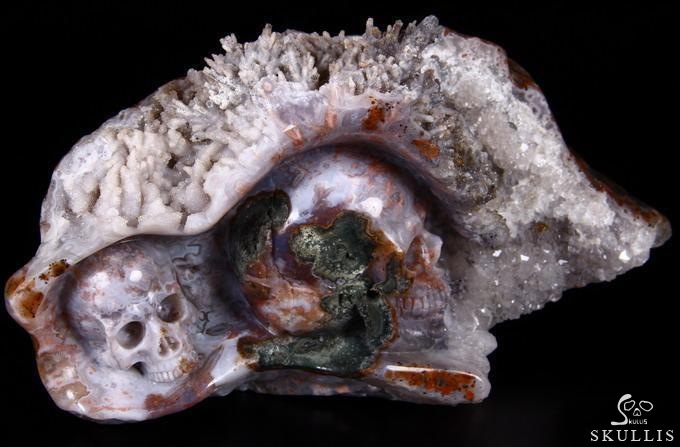 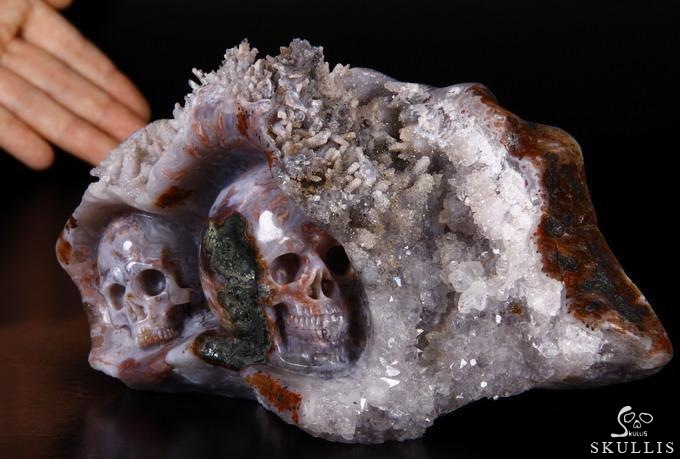