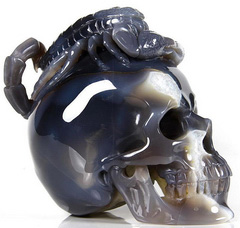 The Emperor Waits is an agate geode from Brazil that has been sculpted into a remarkable crystal skull following the Super Realistic style perfected by Skullis Crystal Skulls. This stunning crystal skull is topped with a meticulously detailed carved Emperor scorpion with black onyx gemstone eyes. The combination of two classic images, the scorpion and the skull, gives The Emperor Waits a portentous presence with a suggestion that something momentous is soon to occur. The Emperor Waits measures 6.3 x 3.9 x 5.3 inches (159x100x135mm) and weighs a total of 4.29 pounds (1945g). The Emperor Waits is carved from a solid agate specimen displaying shades of blue and gray, areas of translucency, and a streak of white that reveals a small sampling of quartz crystal druse.

The Emperor Waits encourages us to have faith in ourselves, and to trust in our abilities to succeed in the many challenges we are faced with as we set aside our self doubt and uncertainty. When we choose to align our thoughts and actions with the harmonious flow of universal energy, the energy of The Emperor Waits crystal skull and scorpion sculpture helps facilitate the process by assisting us to further develop and direct our intuitive senses. The Emperor Waits invites us to take the time to experience a calm and relaxed state of consciousness in which we consider our intuition. This is done so we may learn to recognize the physical cues and emotional feelings that signal communication between our higher spiritual awareness and our mental orientation in the physical world. As we become more familiar with our perceptions of insight, we are able to gain a deeper level of understanding of ourselves, of others, of the various expressions and states of being we exist as, and also of the different worlds, times, and dimensions we simultaneously exist in.

The Emperor Waits agate geode crystal skull and scorpion also lend energy to the process of determining how to proceed when we find our ability to express love and compassion is not as easy as we would like it to be. The Emperor Waits reminds us of our interconnectedness at these times, helping us to remember there is never a need for judgment or disharmony with any other person or situation, due to the simple fact that together we are all a magnificent oneness and our experiences, successes, and failures, are shared collectively.

The Emperor Waits crystal skull and scorpion sculpture teaches us that no task is too great, and we can achieve what we desire when we are motivated to pursue spiritual growth and enlightenment. The Emperor Waits also helps us to understand that to work with others, and to ask for help, is a valuable lesson that benefits not just ourselves, but those we honor with our requests as well.

The symbolism of the scorpion is quite diverse. Foremost, scorpions represent change, death, and rebirth. They symbolize transformation and a different way of seeing the world and experiences, letting go of old habits and situations to make way for the new, including cutting away behaviors that enable those who are holding on to dependence of another instead of becoming self sufficient. Scorpions symbolize an affinity for solitude and independence, setting boundaries, and leaving that which is familiar and comfortable to move forward into new experiences.

Scorpions represent a person’s strength and the inspiration brought about by the showing of that strength. They represent sexuality and intense passion, and the ability to be vulnerable without embarrassment. The scorpion energy is fiercely protective and defensive when necessary, and if one is not careful, people with this energy can be verbally hurtful when provoked. Scorpions represent the importance of temperance and the need to practice patience, acceptance, and forgiveness.

Scorpions can also signify areas in life that are being avoided due to emotional distress and hurt attached to a` situation. Fortunately scorpions also are able to weather such experiences without experiencing permanent detrimental repercussions. The symbol of the scorpion can also suggest that caution is wise, with attention to issues that may be causing one to harbor discontent and fear that can result in these energies being expressed in a self destructive way. Again, the scorpion reminds one to accept, let go, and move onward with one’s growth processes.

In addition scorpions can represent the psychic ability of psychometry and one’s affinity for tactile sensations. They are symbols of clarification, focus and concentration, mysticism, mystery, secrecy, and stealth. Scorpions can represent the acquisition of knowledge, as well as healing, inspiration, and resilience. In many aspects scorpions symbolize life and vital energy and the preservation of such through protection. Scorpions represent a warning of danger and treachery, the detoxification and transformation of poisons, defensiveness and retaliation, rebellion and survival, strategy, boldness, and reflecting negativity back to its source. Scorpions are also considered to be protectors and defenders.

NOTE: Skullis does not prescribe treatment for medical issues. Skullis offers information for reference to assist with the selection and understanding of crystal skulls, including this agate geode crystal skull and scorpion sculpture. 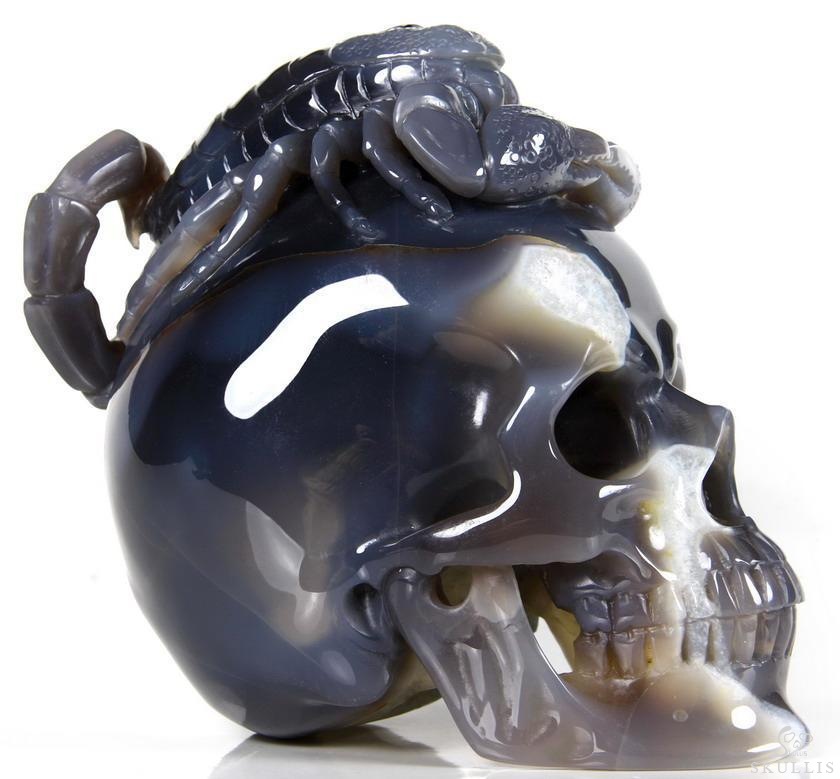 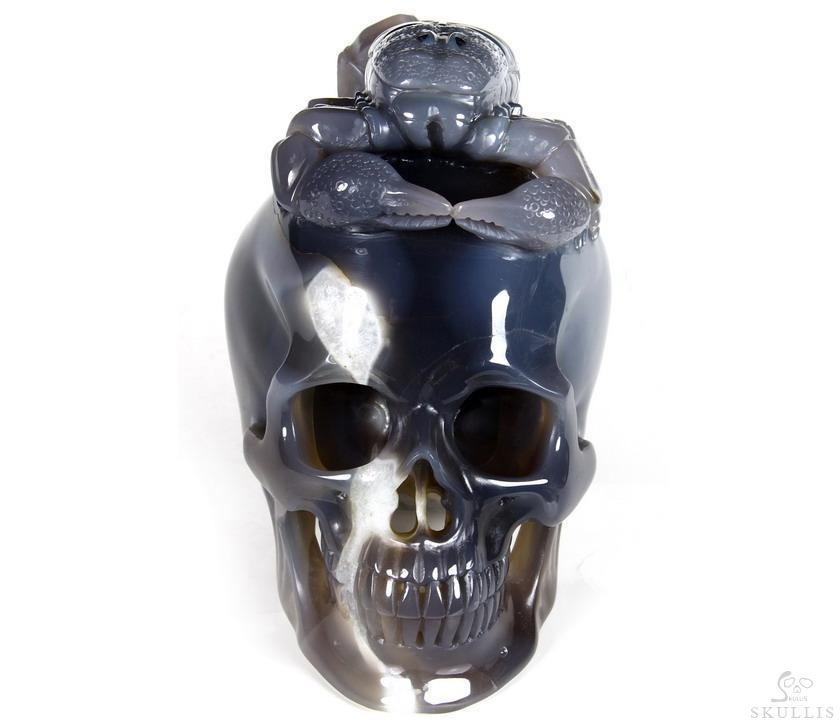 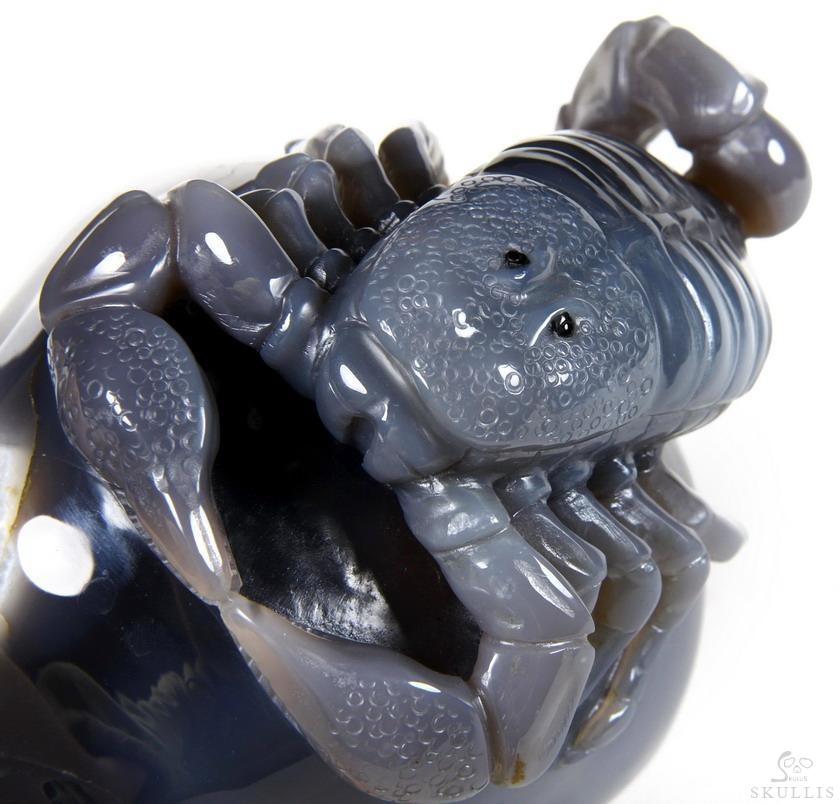 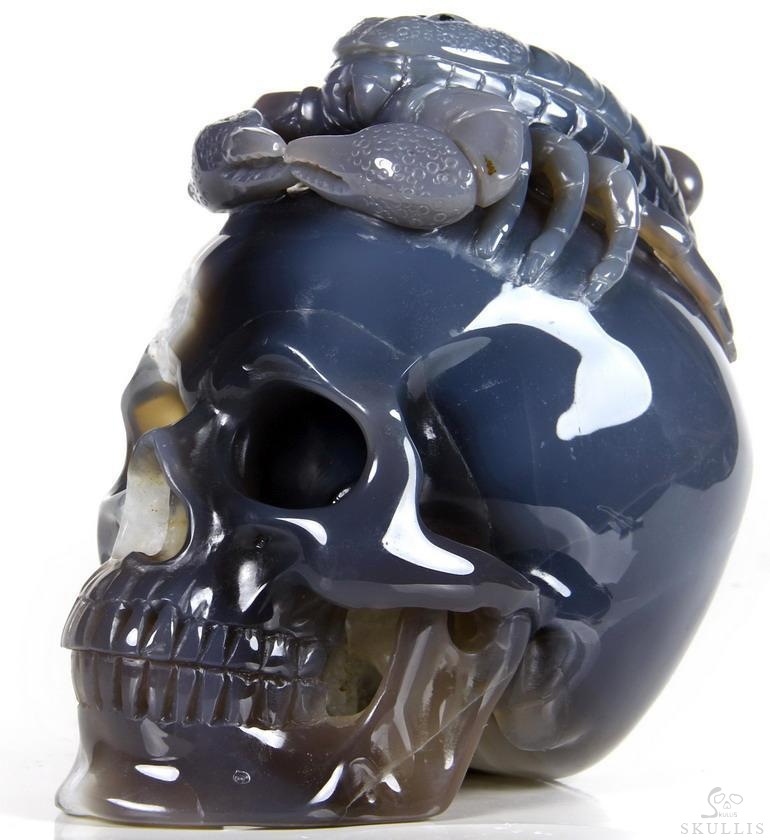 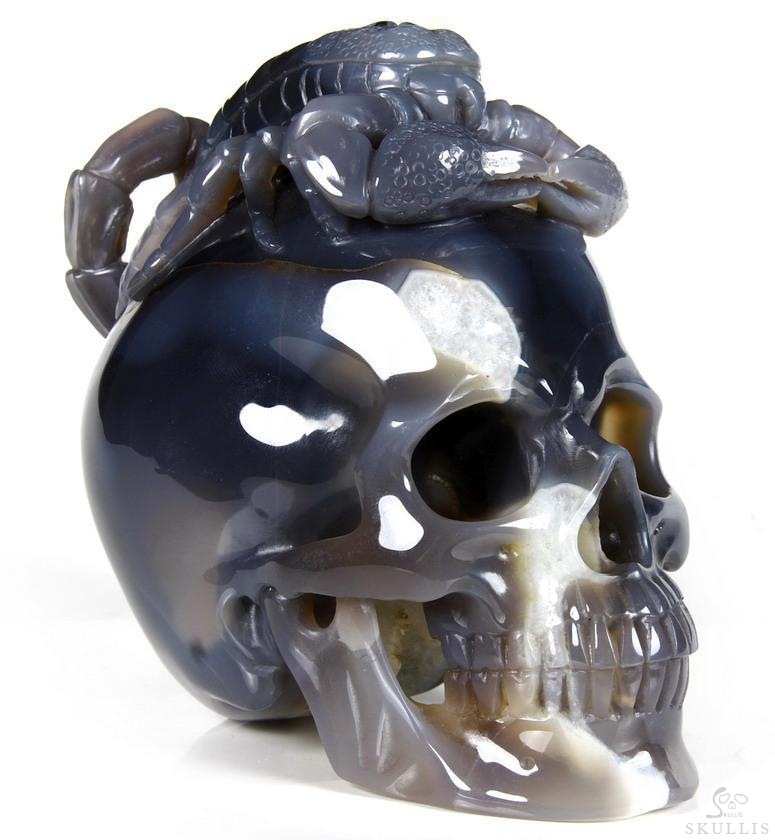 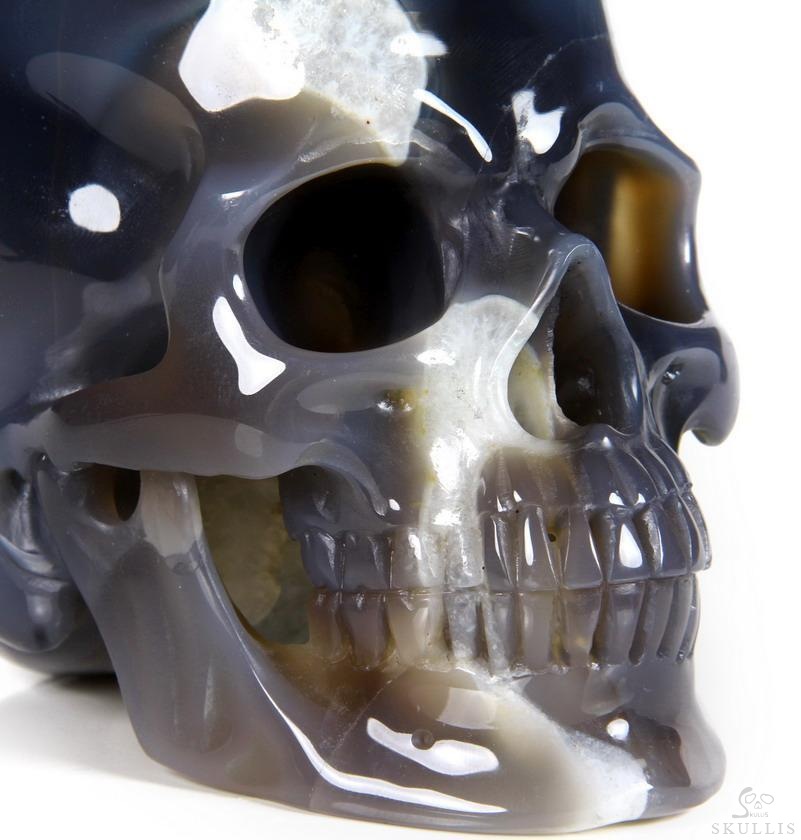 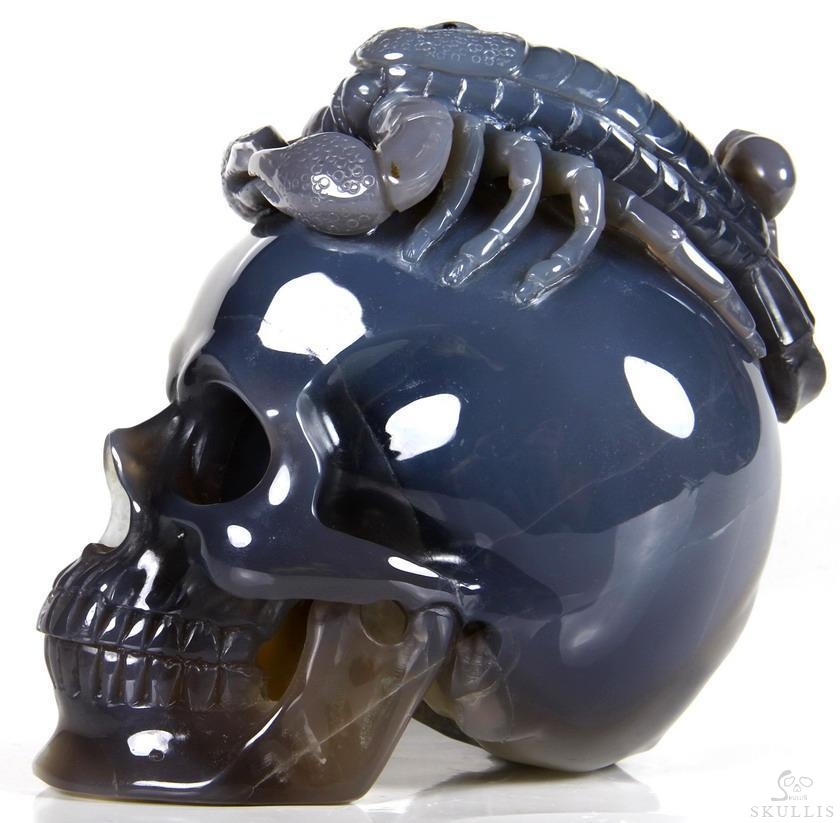 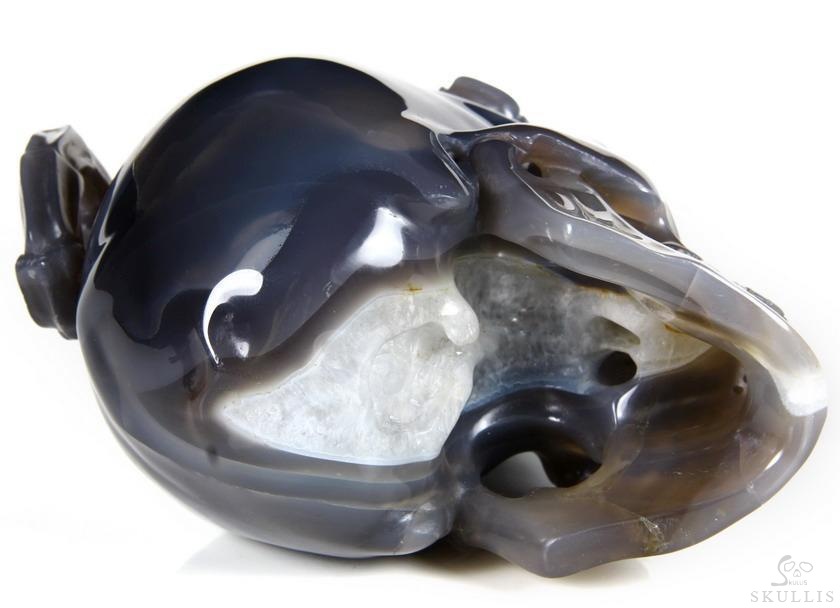 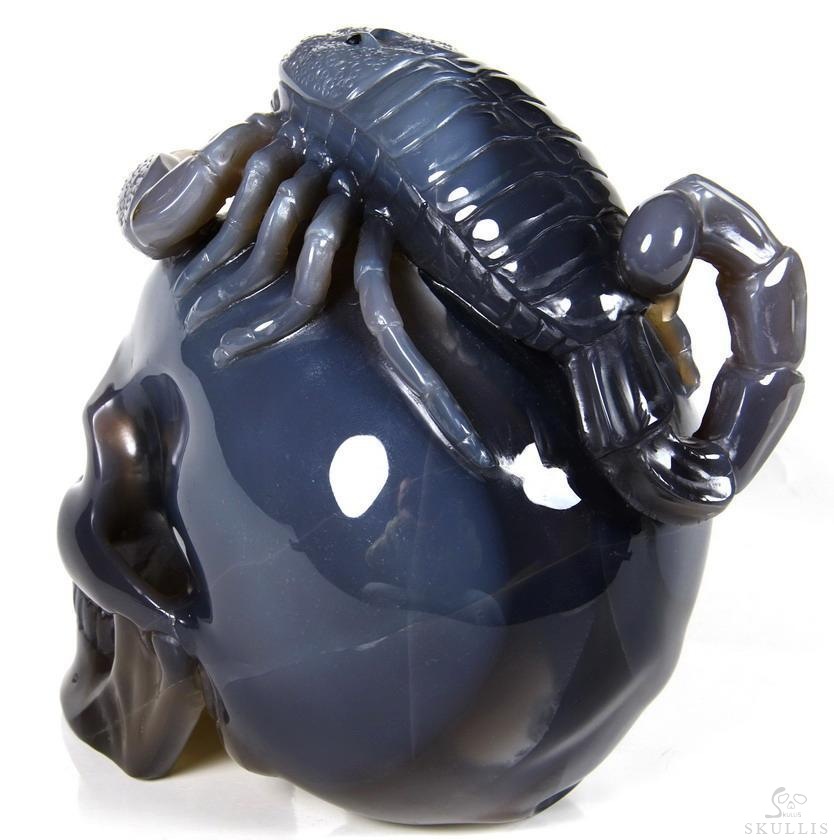