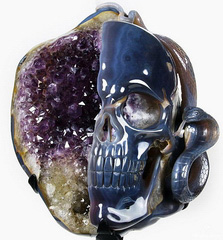 The Serpent's Secret is a remarkable crystal skull sculpture carved from a stunning agate amethyst geode from Brazil. The agate displays bands of several shades of blue, purple, and gray, framing the inner crystal druse which transitions from a base of golden yellow, to clear crystal, to a lovely intense purple amethyst termination. The Serpent's Secret crystal skull occupies the left portion of the agate geode, listening to the wisdom being shared by a sculpted agate cobra as its tongue tests the air. The cobra's hood and tongue both show the high degree of translucency of the agate specimen. The back of the geode is unaltered from its rough natural state, and The Serpent's Secret sculpture sets on a custom designed iron work support which holds it suspended above a beautiful kambaba jasper stand that perfectly complements the color and incredible details of the agate amethyst carving. The Serpent's Secret agate amethyst geode sculpture measures 5.3 x 9.6 x 10.6 inches (135x245x270mm) and weighs 15.54 pounds (7050), and the kambaba jasper and iron work stand measures inches 6.5 x 5.2 x 15.7 inches (165x132x400mm) and weighs 8.71 pounds (3950g).

The Serpent's Secret agate amethyst geode crystal skull and snake sculpture focuses on new beginnings, encouraging us to nurture an optimistic and forward looking attitude that will allow us to emotionally and intellectually express our compassionate and generous nature. The Serpent's Secret helps us to be more kind and gentle with ourselves so we may communicate and listen more effectively when interacting with others.

The Serpent's Secret crystal skull and snake encourage us to consider the core reasons and purposes that incite our attitudes and actions. With a greater understanding of these, we can start the process of restructuring our motivations toward achieving our goals and aspirations of mutual growth and prosperity, and of actualizing the harmony of oneness.

The Serpent's Secret agate amethyst geode crystal skull and snake sculpture inspires us to endeavor to express in our physical reality the spiritual wisdom that each of us is within, and to follow the guidance of our intuition and higher consciousness in pursuit of attaining what is most beneficial for all people.

The serpent is a symbol of royalty and power, wisdom, health, wealth, primordial life force, and the search for balance. As a symbol of duality, the serpent also represents lust, greed, and temptation. The snake represents the assertive power of masculinity as well as the nurturing, mothering power of creation, this often being depicted as a serpent encircling the earth. The snake has been a symbol of secret knowledge, cunning, rebirth and renewal, and transformation. The snakes tendency to withdraw in colder weather, and return again at the call of the sun has given it the associations of connecting to shadow worlds and of moving in synchronization with natural forces. Snakes also symbolize water, emotion, love, benevolence, loving harmony between the physical and the ethereal, the kundalini spiritual energy within the body, balance, equanimity, union, and rejuvenation and regeneration. Snakes can be considered to be a representation of being impulsive while also being careful to consider the outcome of one’s actions.

Amethyst brings a peaceful and pacifying energy to the neural impulses of the brain. It is used to resolve insomnia, especially when the condition is caused by an excess of mental activity. Amethyst lessens and removes stress, anxiety, and nervous tension, stabilizes brain activity and imbalances, and is used to counter psychic disturbances.

NOTE: Skullis does not prescribe treatment for medical issues. Skullis offers information for reference to assist with the selection and understanding of crystal skulls, including this agate amethyst geode crystal skull and snake with kambaba jasper stand sculpture. 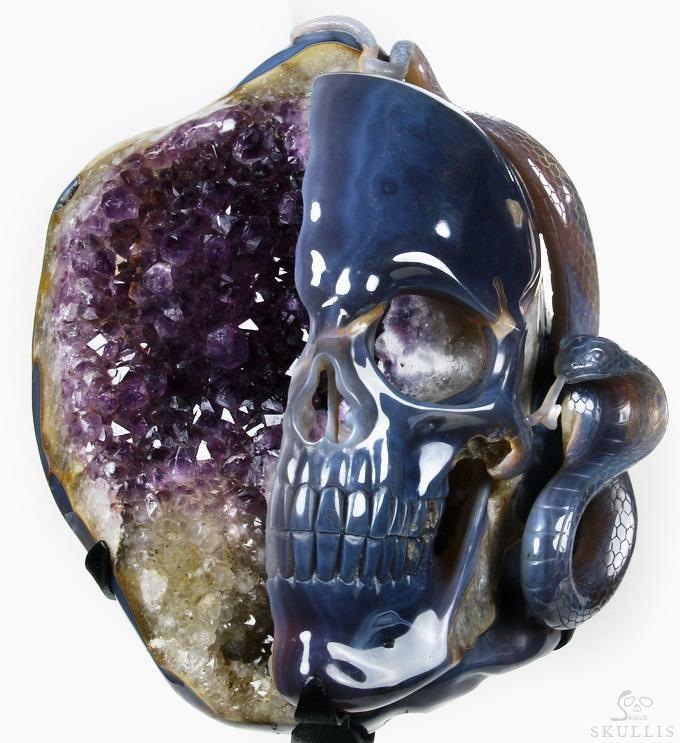 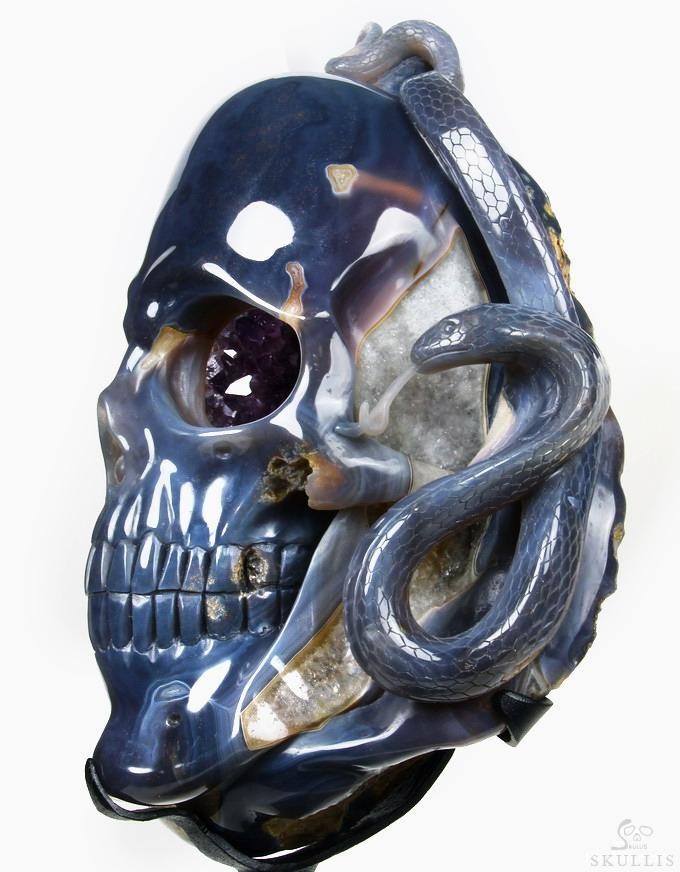 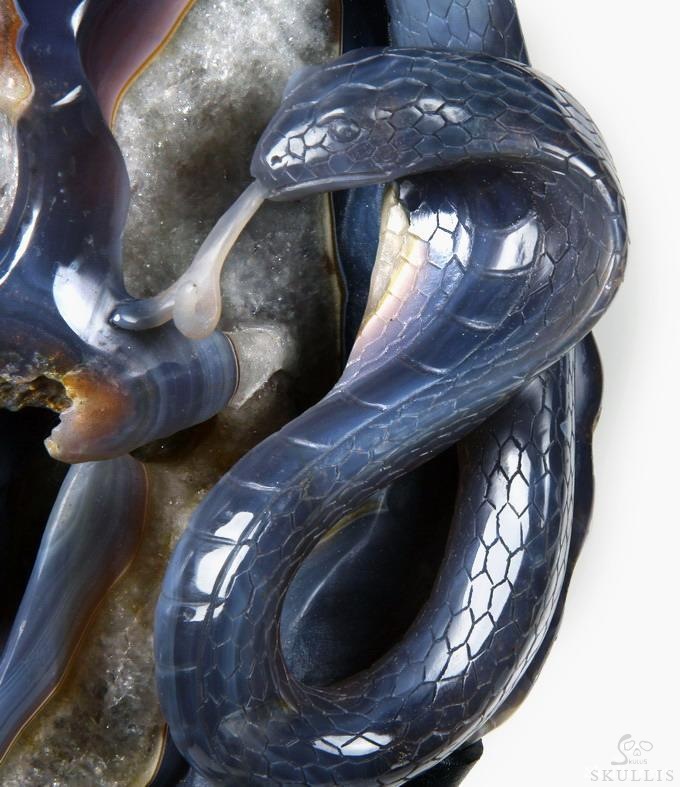 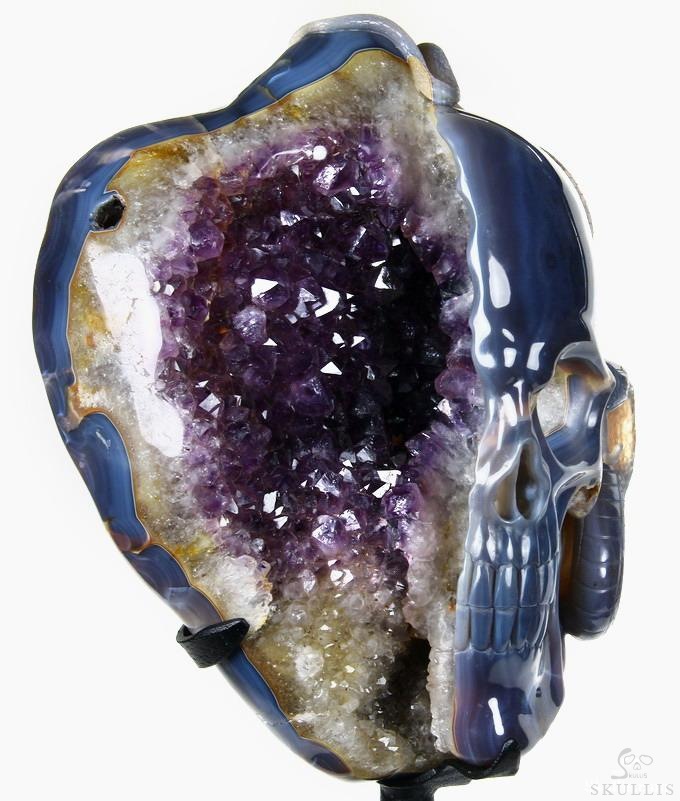 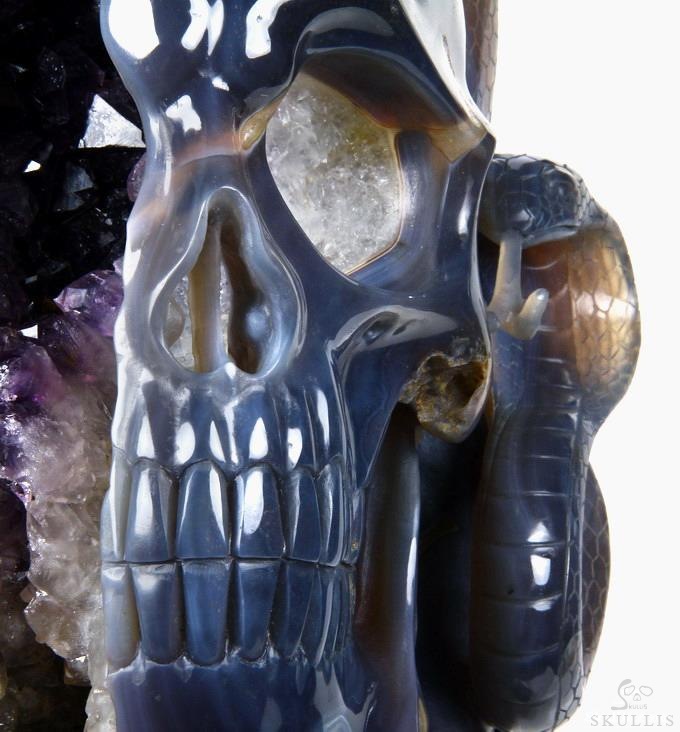 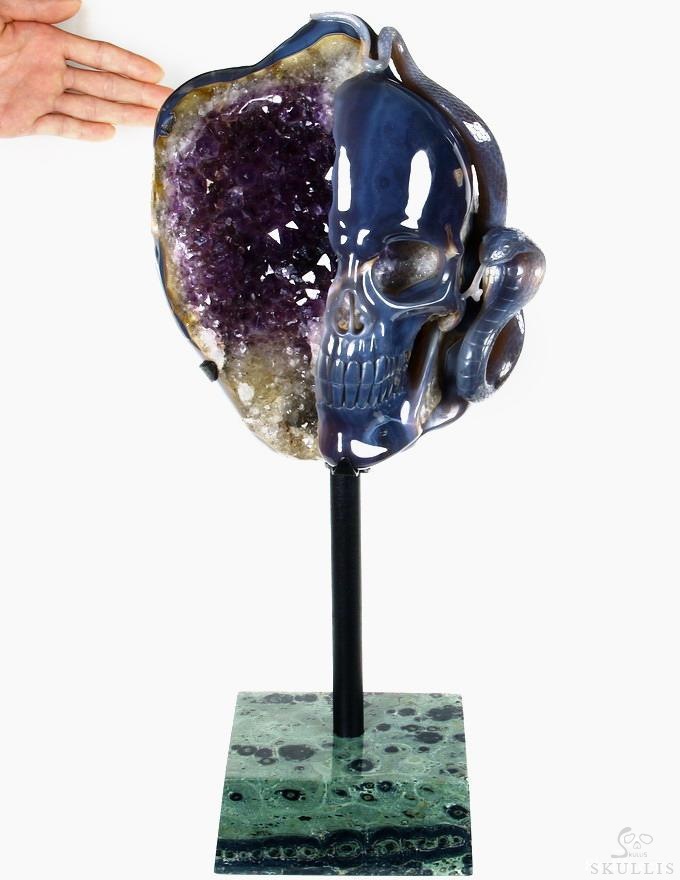 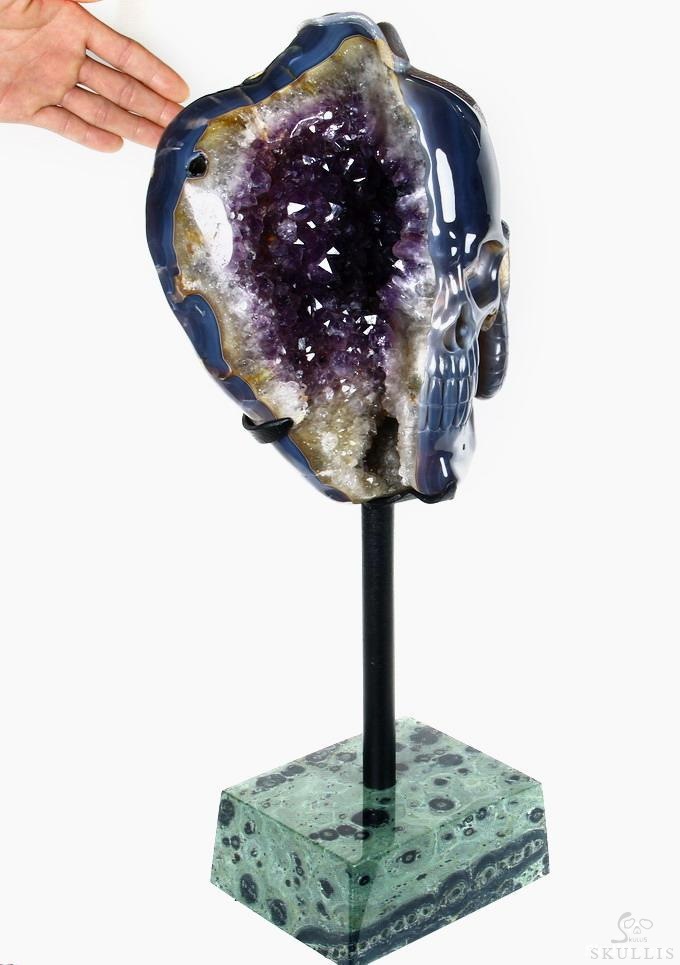 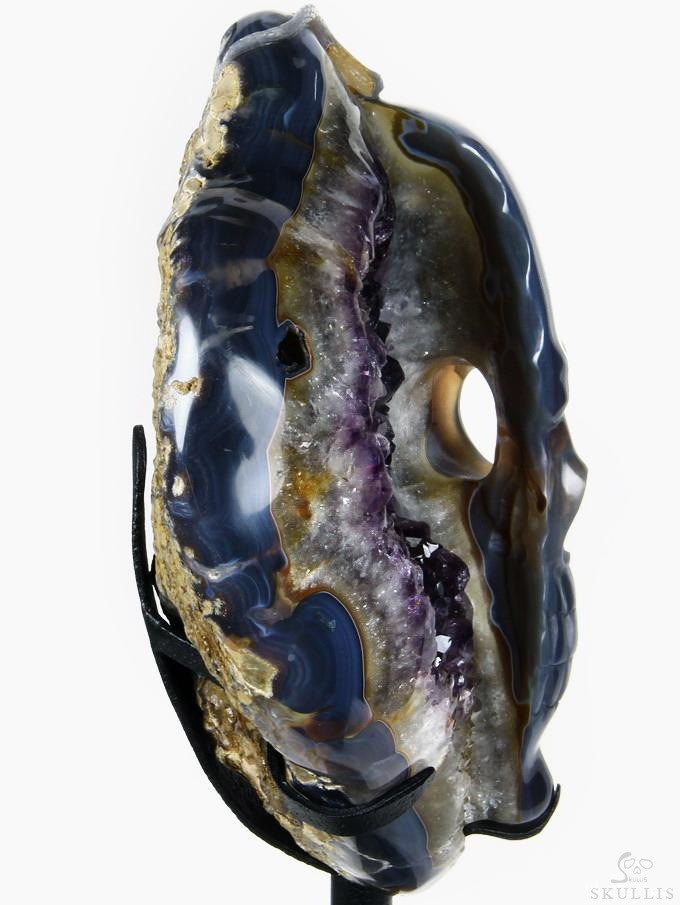 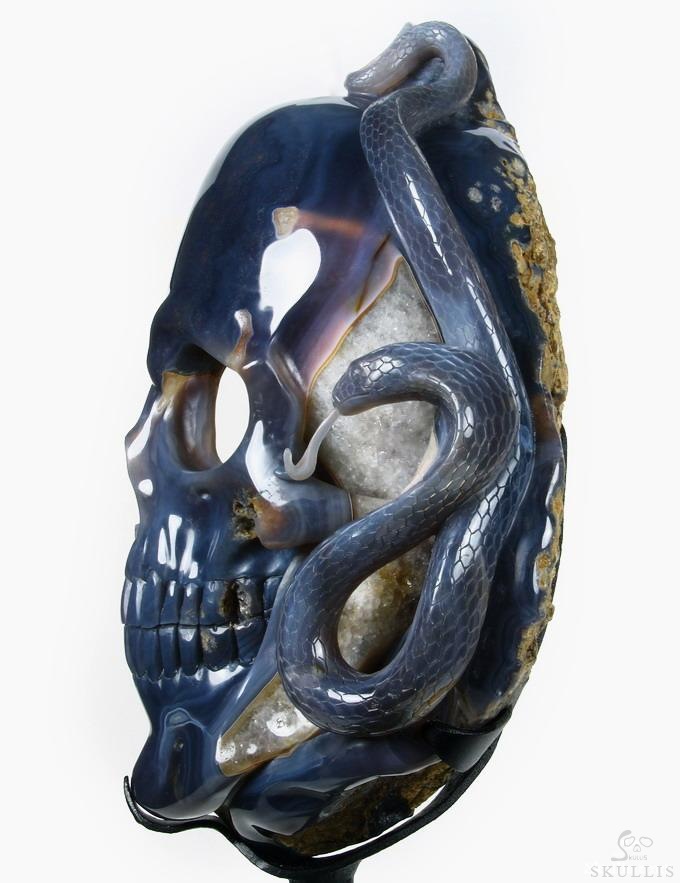 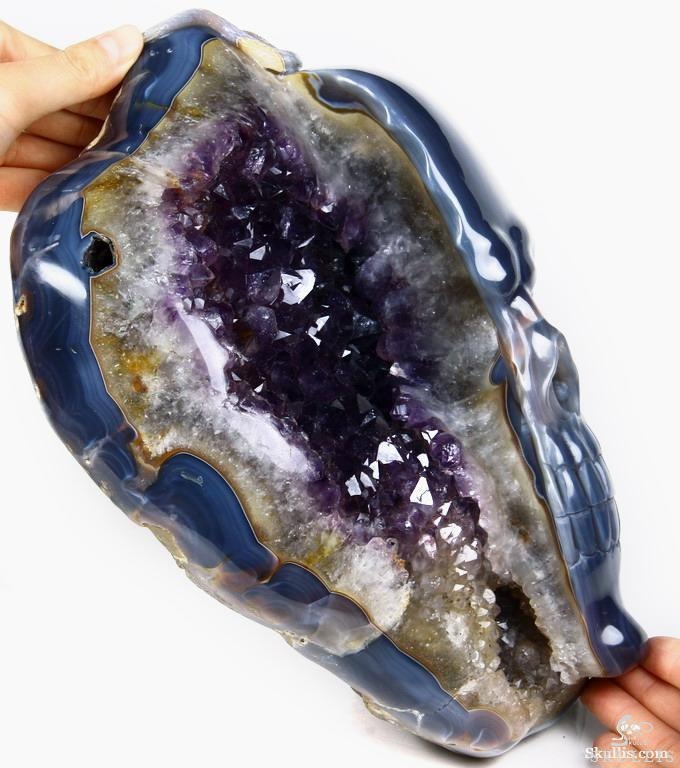 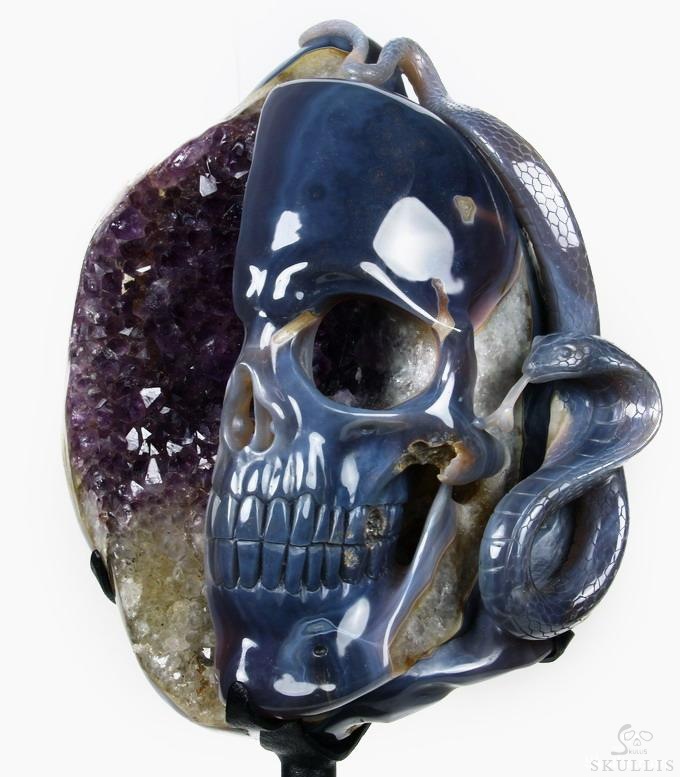 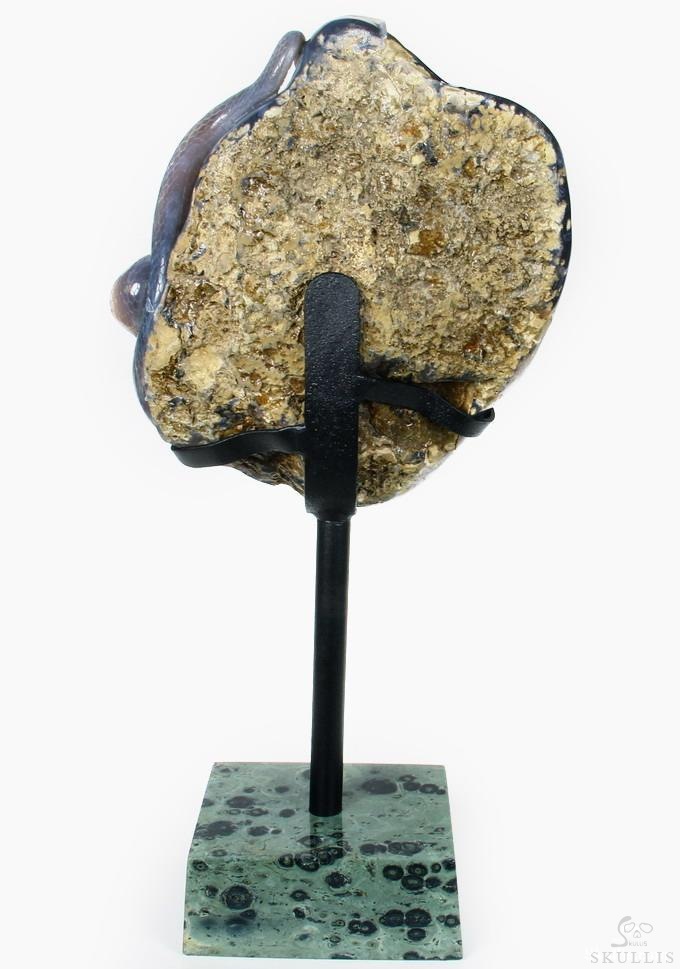 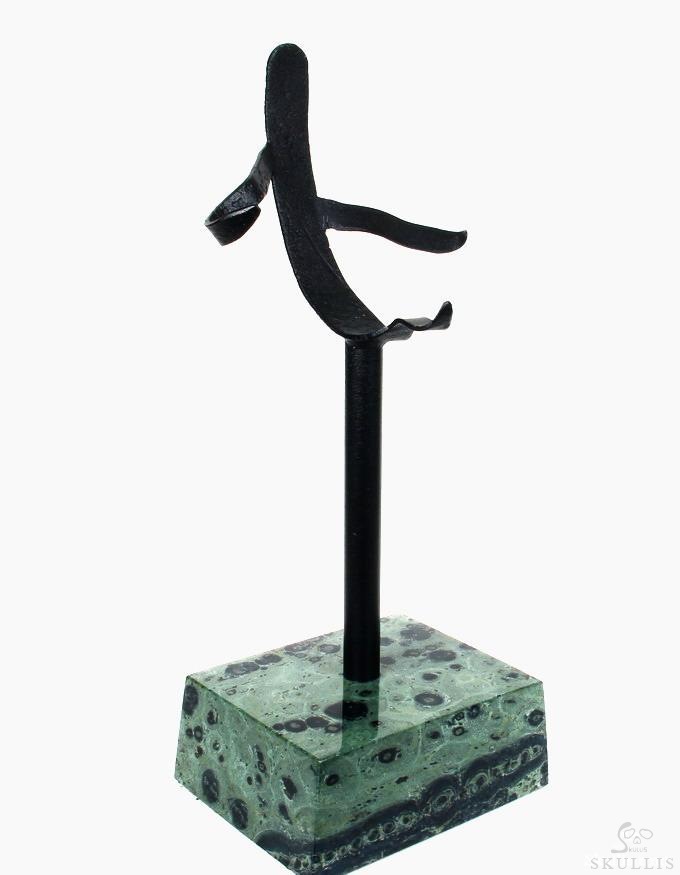 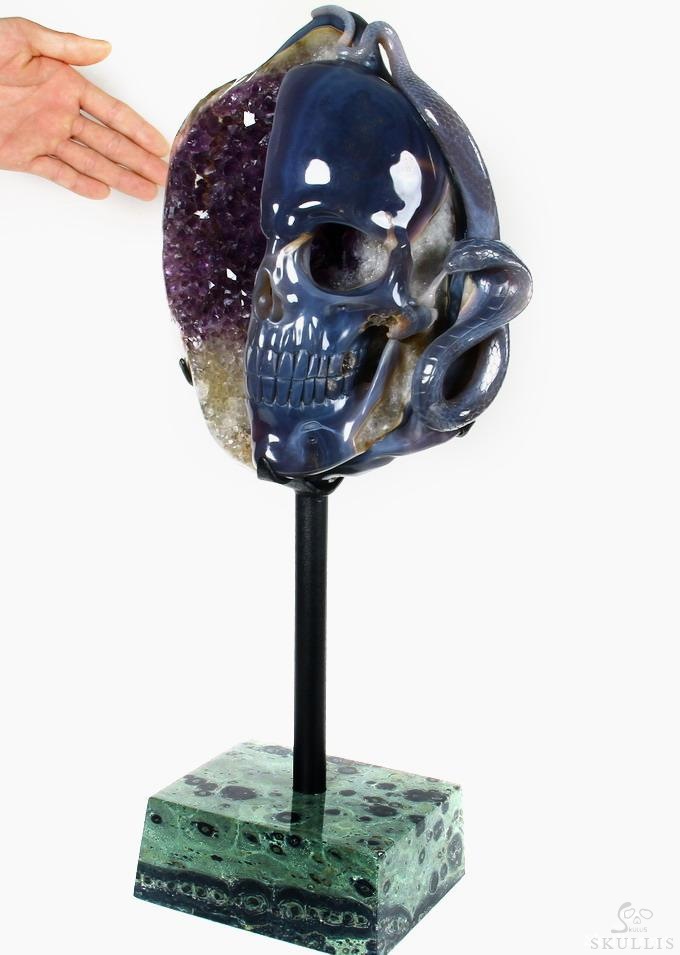