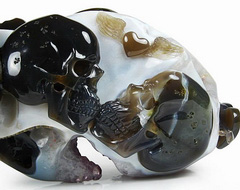 Amore is a masterpiece of crystal skull art from Skullis. A very large and very lovely geode encrusted with beautifully translucent and richly purple amethyst crystal terminations is surrounded by a layer of milky white agate. Beyond this, the outer darker translucent agate layers have been carved away to reveal four perfectly detailed crystal skulls in profile. Carved from a single agate amethyst geode specimen from Brazil, Amore stands upright on its own base. On one side, a pair of agate crystal skulls share a passionate and loving kiss as a winged heart flies by, while on the opposite side another couple presents a display of tender affection and delicate intimacy. At the top, two agate hearts are affixed together by a piercing arrow, and below near the base of the sculpture the words "Love Never Dies" are also carved from the darker agate layer, making them to show prominently on the white background. The Amore agate amethyst geode crystal skulls sculpture is a true work of art, invoking a myriad of concepts and emotions from so many amazingly crafted details. This remarkably unique crystal skulls carving measures 6.0 x 6.7 x 12.2 inches (152x171x310 mm) and weighs 19.79 pounds (8980 g).

The crystal skulls of Amore help us to appreciate the special bonds of all types of companionship and love, and remind us something so beautiful should never be taken casually, nor easily set aside. Rather, we are encouraged to give careful consideration to the rarity of the ties of intimacy, and to endeavor to always understand that to truly love is to others in higher regards than one's own self. The Amore agate amethyst geode crystal skulls sculpture challenges us to surpass the trappings of familiarity, to be true and honest to ourselves and to others, and to recognize that all people may be forgiven when we are motivated to be loving, harmonious, and focused on helping others to be truly happy.

Amethyst brings a peaceful and pacifying energy to the neural impulses of the brain. It is used to resolve insomnia, especially when the condition is caused by an excess of mental activity. Amethyst lessens and removes stress, anxiety, and nervous tension, stabilizes brain activity and imbalances, and is used to counter psychic disturbances.

NOTE: Skullis does not prescribe treatment for medical issues. Skullis offers information for reference to assist with the selection and understanding of crystal skulls, including this agate amethyst geode crystal skulls sculpture. 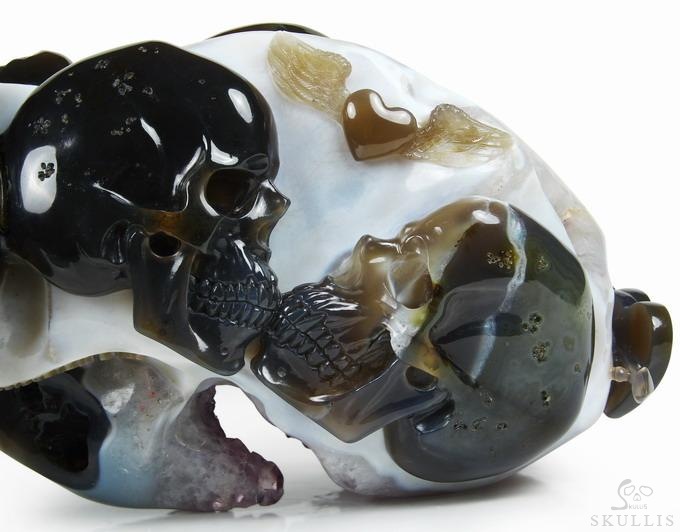 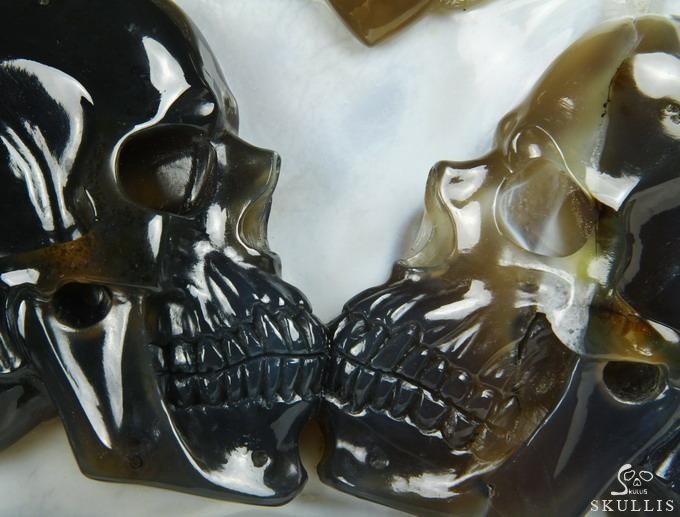 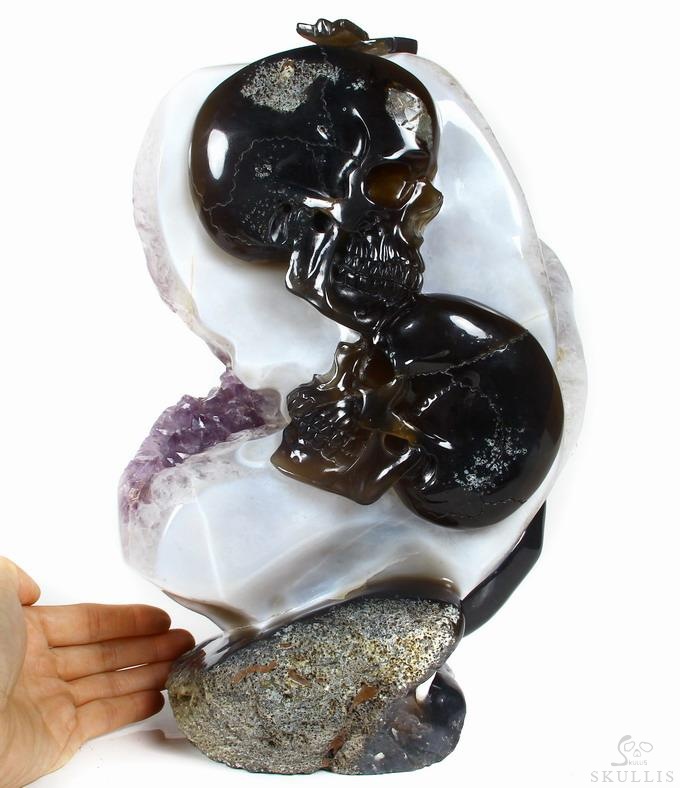 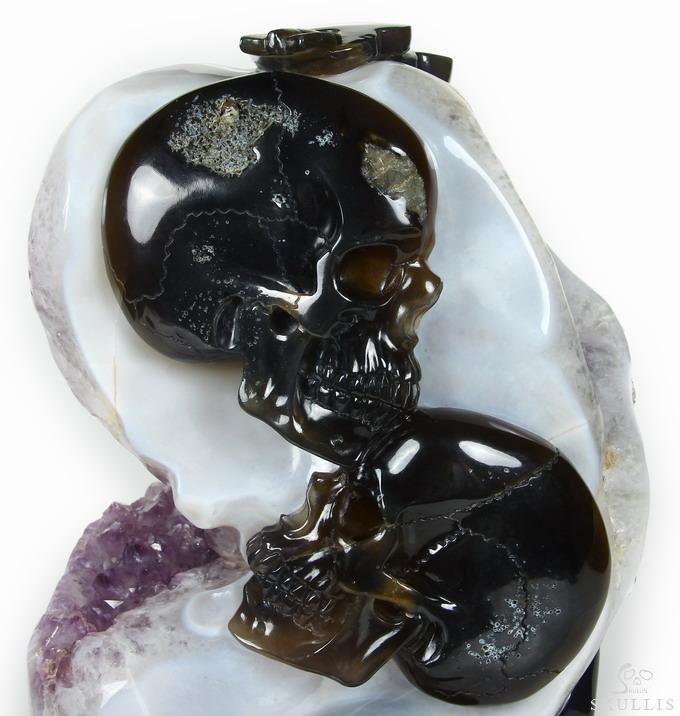 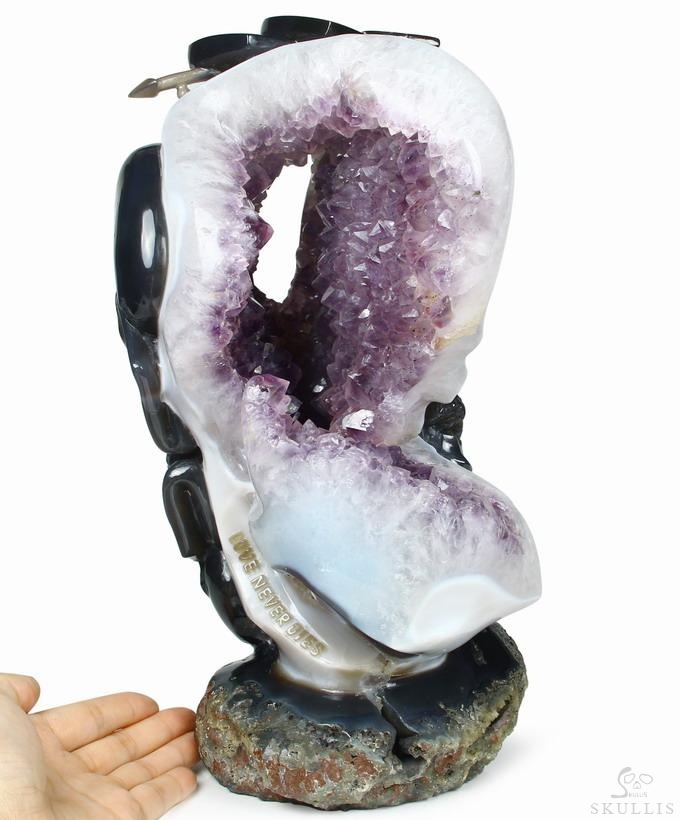 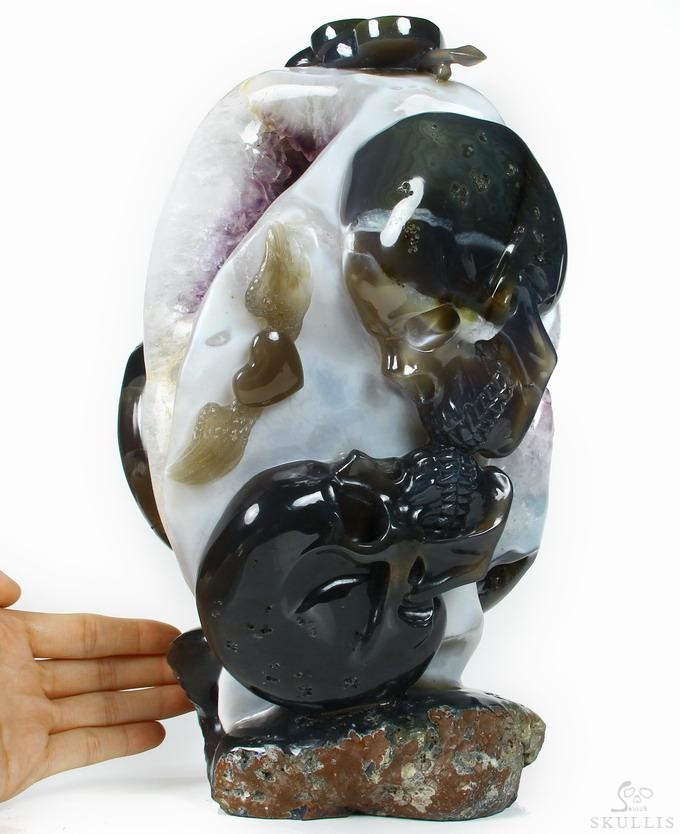 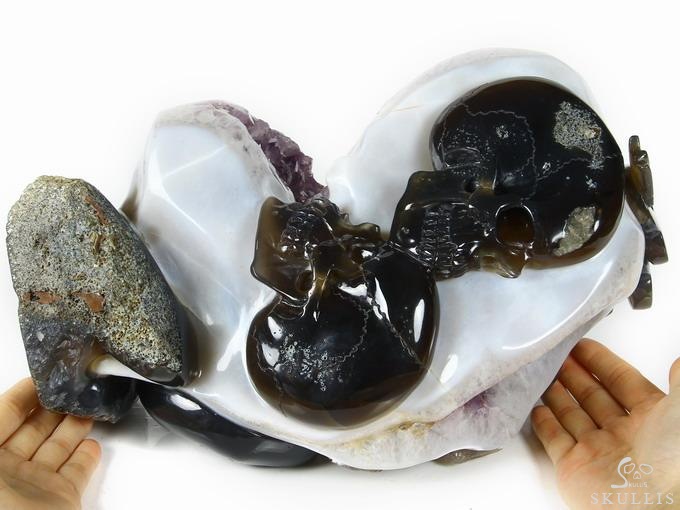 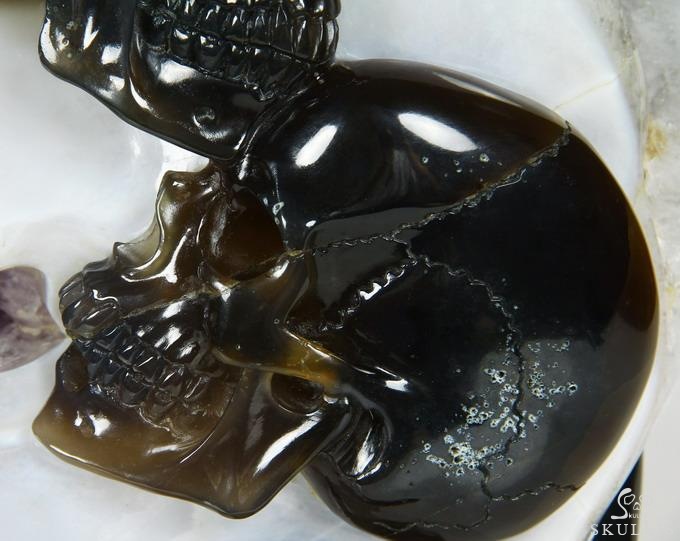 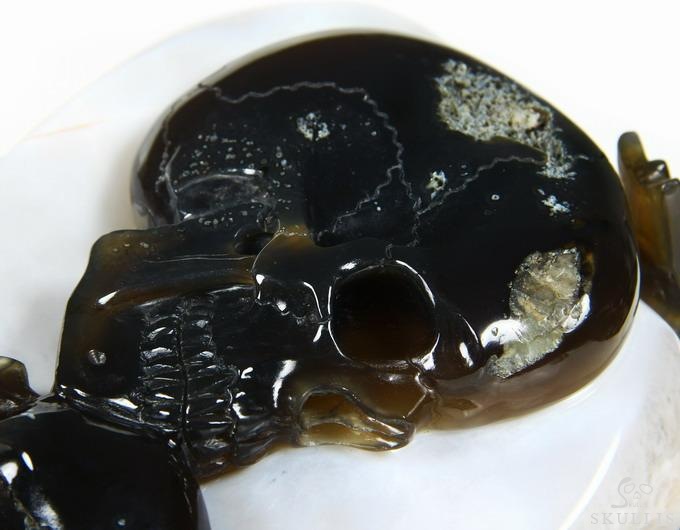 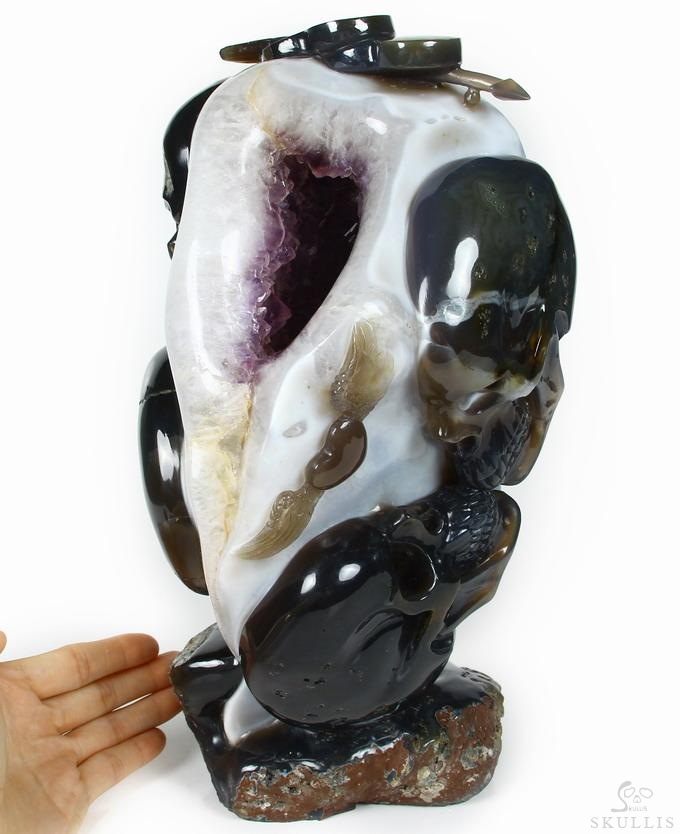 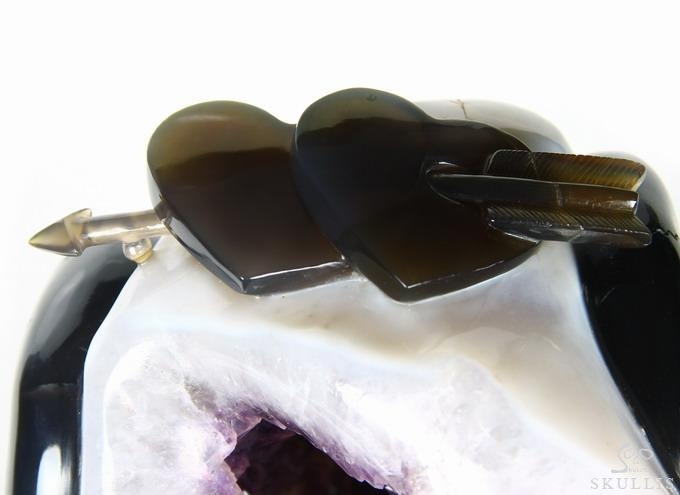 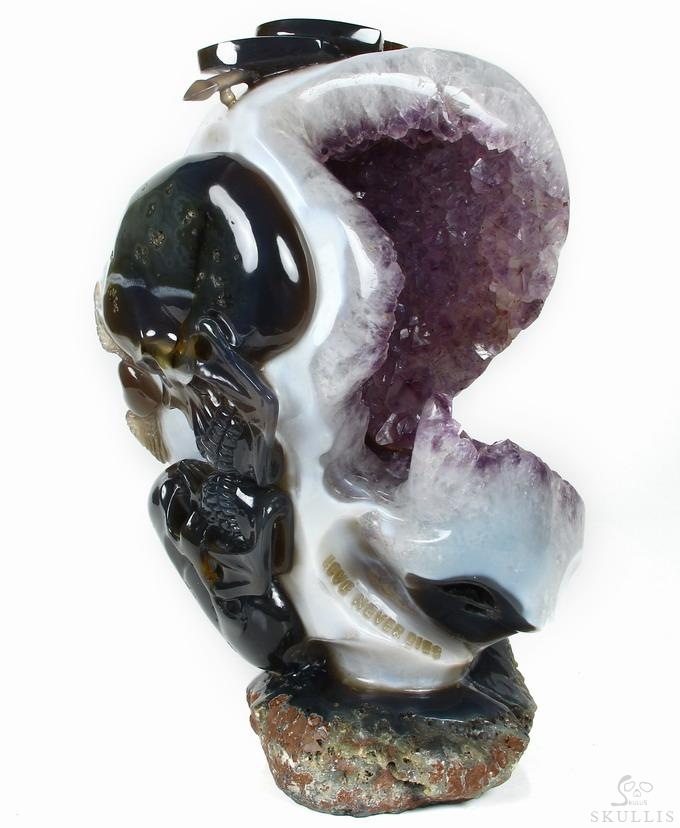 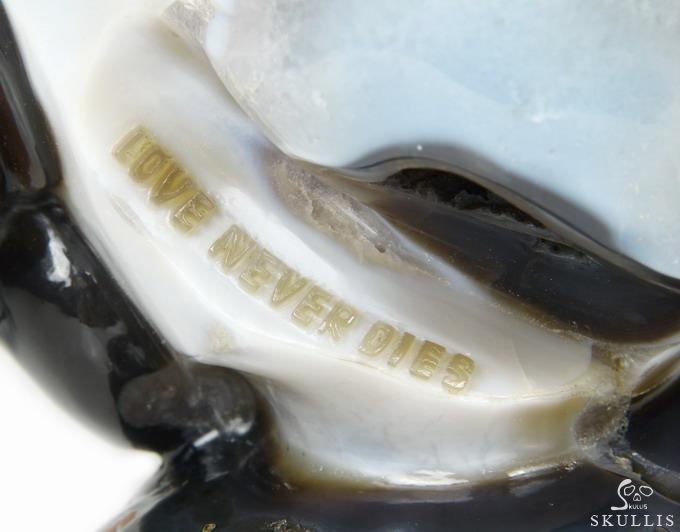 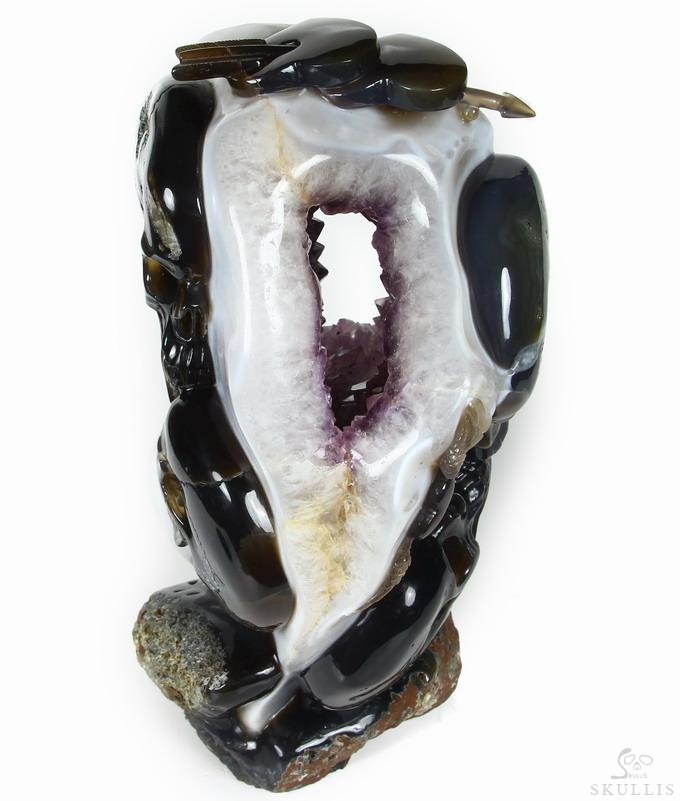 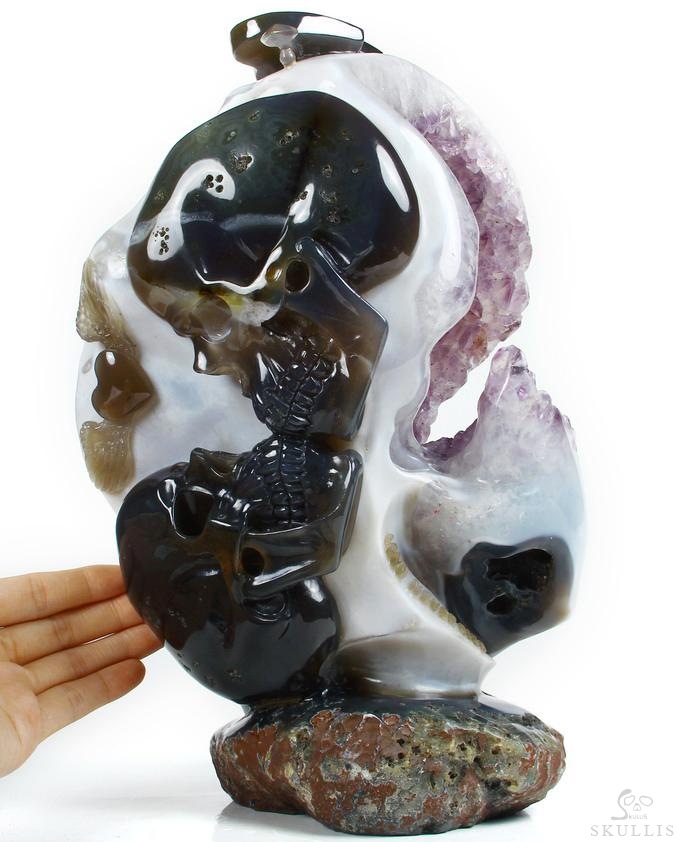